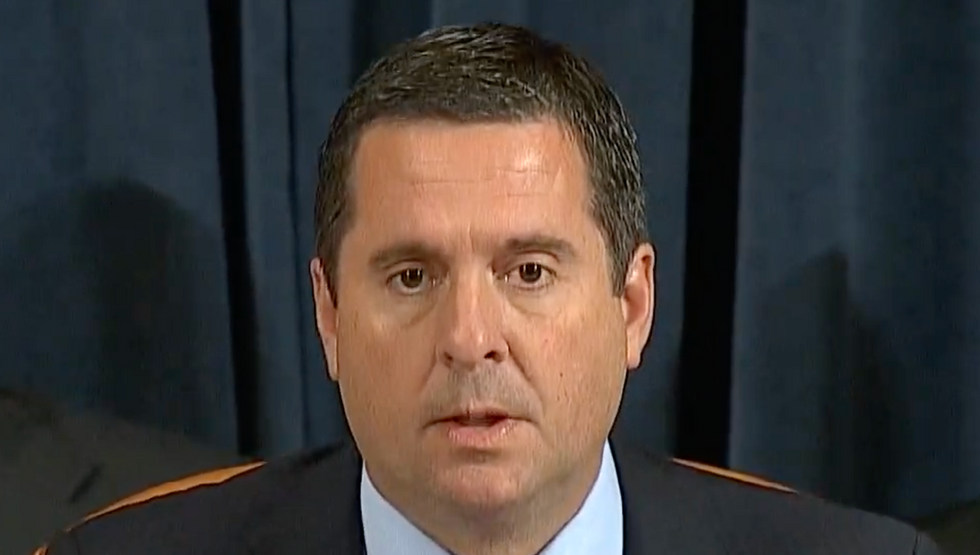 Rep. Jim Jordan of Ohio, Rep. Devin Nunes of California and other House Republicans were clearly trying to rally the Trumpian base on Wednesday, when the impeachment inquiry against President Donald Trump offered its first public testimony. Jordan and Nunes aggressively tried to discredit the inquiry and the two witnesses who testified: diplomat William B. Taylor (U.S. ambassador to Ukraine) and Deputy Assistant Secretary of State George P. Kent. But conservative Washington Post opinion writer Jennifer Rubin, in a Wednesday column, stressed that House Republicans — for all their “antics and conspiracy theories” — failed to show why Trump shouldn’t be impeached, while House Intelligence Chairman Adam Schiff and other House Democrats showed why he should.

The public impeachment hearings, Rubin noted, “seek to establish whether President Trump bribed a foreign power to help him smear a political rival”: former Vice President Joe Biden — and Schiff “outlined the basic factual narrative” and the “facts that Republicans have yet to contradict, let alone disprove.”

“Nunes ignored the factual account Schiff laid out, and the contrast between the two sides — one relying on facts, and the other resorting to blather and hysteria — was clear,” Rubin asserts. “The complete absence of any factual or legal defense (of Trump) was telling.”

The “blather and hysteria” that Rubin is referring to included Nunes, during the inquiry, promoting the Crowdstrike conspiracy theory — which claims that in 2016, the real interference in the 2016 presidential election came not from the Russia government, but from the Ukraine government. And while House Republicans were spewing nonsense, Rubin writes, Democrats were using the witnesses to lay out real evidence.

Taylor, Rubin observes, “dropped a new fact bomb: a staffer had overheard (Ambassador Gordon) Sondland talking to Trump about ‘investigations.’ The staffer asked Sondland what Trump thought of Ukraine, and Sondland told him Trump cared less about Ukraine than about the investigations into Biden.”

Rubin adds, “In response to questions from Schiff after this bombshell, Taylor reiterated that security assistance had allowed Ukraine to defend against Russian measures.”

Some of the most productive questioning of the witnesses, Rubin asserts, came from Democratic counsel Daniel S. Goldman, who “asked Taylor if he ever heard, in all his years of service, of military aid being withheld for the personal or political benefit of the president.” Taylor’s response: “No, Mr. Goldman, I have not."

Rubin concludes her column by emphasizing that Wednesday’s hearing only presented two of the many witnesses Democrats have asked to publicly testify in the impeachment inquiry.

“There will be much more to say as these hearings continue,” Rubin asserts. “At this point, though, aside from antics and conspiracy theories, Republicans have no factual rebuttal to the damning testimony that Trump put Ukraine at risk by withholding critical security assistance unless Ukraine helped his reelection effort. Nothing could be more impeachable than that.”