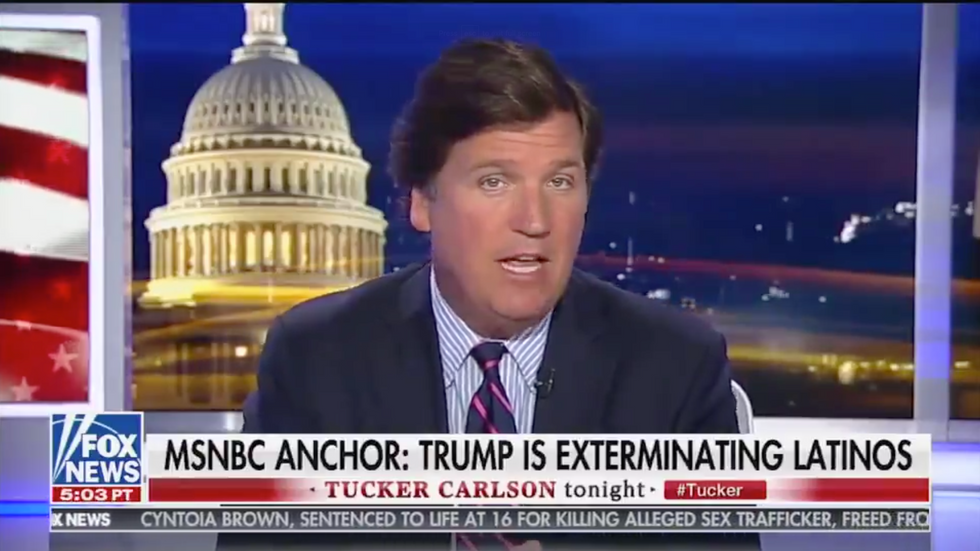 Attorney General William Barr has been gallivanting around the world trying to enlist foreign government to assist Donald Trump's campaign discredit the US intelligence and law enforcement agencies that exposed Russia's active measures campaign in the 2016 election. To put into perspective just how inappropriate it is for the nation's highest law enforcement officer, who is ostensibly independent from the White House, to play that role, just consider that when former President Bill Clinton chatted with then-Attorney General Loretta Lynch for 15 minutes or so while their private jets were sitting on an Arizona tarmac in 2016, conservatives considered it to be a significant scandal--and convinced many mainstream reporters and pundits to treat it as such--because Lynch's agency oversees the FBI, which was investigating Hillary Clinton's emails at the time.

A report by the DOJ's Inspector General found no evidence that anything was amiss in the brief encounter, as one might expect. That same Inspector General, Michael Horowitz, will soon weigh in on a popular conservative conspiracy theory about the FBI's investigation into Kremlingate--specifically, that the FBI applied for a warrant to surveil former Trump advisor Carter Page based on the Steele Dossier, and that this ultimately kick-started the investigation making it somehow illegitimate. Setting aside the fact that law enforcement agencies act on tips from all sorts of dubious characters every day, Horowitz, who is widely respected as a straight-shooter, will find that there is no merit to the allegations that the FBI acted improperly because the application for a warrant wasn't filed until long after their investigation was underway, and because, more generally, it would have been a dereliction of duty for the FBI to not investigate given multiple tips from foreign intelligence agencies that a variety of operators connected to the Kremlin were making contacts with Trump's people.

Enter Paul Sperry, a conservative who pens conspiratorial columns for The New York Post and writes similar stuff at Real Clear Investigations. This week, Sperry penned multiple posts attacking Horowitz, including one in which he cites the fact that the Inspector General concluded that Clinton and Lynch's chat was a big nothingburger to discredit Horowitz before he has a chance to conclude that FISA-gate is also a contrived nontroversy.

Former investigators who fear Department of Justice Inspector General Michael Horowitz will pull punches in his upcoming report on alleged FBI abuses point to his inquiry into the so-called tarmac meeting between former President Bill Clinton and then-Attorney General Loretta Lynch in 2016.

They say it illustrates his unwillingness to use his broad powers to uncover information that could be damaging to top officials.

This is roughly equivalent to murdering your parents and then asking the court for mercy because you're an orphan. But while laughable, Perry isn't the only conservative writer who has been working hard to discredit a federal agency's Inspector General.

The Federalist's Sean Davis thought he had a big gotcha scoop when he claimed that the National Intelligence Inspector General had quietly changed a requirement that whistleblowers have first-hand knowledge of the matters they report, supposedly in order to allow the CIA officer at the heart of the Ukraine scandal to come forward with that he knew.

It turns out that every aspect of his story was factually inaccurate, but while it was a good example of a poorly informed but fiercely partisan writer stepping on rakes, the conspiracy theory soon spread to all corners of the conservative media, Republicans in Congress and ultimately the president*.

The IG was forced to issue a statement this week clarifying that while a form whistleblowers must submit was changed for clarity, the rules had not been altered in any way and the whole thing was silly anyway because the anonymous intelligence officer based his complaint on first-hand information as well as information that was conveyed to him by others.

In a rational world, The Federalist would be publishing mortified corrections and Republicans would be engaged in soul-searching as to how such a simplistic fallacy had gained credence at the highest levels of their party. In a world where the conservative movement had at least some slight attachment to reality, the Federalistas would be quietly slinking away and changing the subject.

But in the actual world, they are continuing to insist they were right all along. The Federalist reporting team has not even developed its own alternative sources. Instead, they are plucking out sentences from the I.G. report that was written to correct their errors and claiming them as vindication.

Again, while these pratfalls may be comical, they speak to a larger effort to cast doubt on the credibility of non-partisan law enforcement and intelligence agencies that are tasked with investigating corruption within the regime. That's potentially quite dangerous.

It's important to recall that all of these attacks on the FBI began with a typically incoherent tweet from Donald Trump shortly after he took office. At the time, Trump’s claim that the Obama administration had spied on his campaign was too goofy even for Republicans to embrace. The House Intelligence Committee, then chaired by Rep. Devin Nunes (R-CA), sent a letter to the Justice Department demanding that they provide evidence to support the claim. (Nunes would later become one of “SpyGate’s” most prominent advocates.) The late Senator John McCain agreed with early 2017 Nunes, saying “I think the president has one of two choices: either retract or provide the information that the American people deserve.” Kellyanne Conway, then a senior advisor to Trump, admitted that there was zero evidence to support Trump’s tweet, but argued that it was possible that the CIA had spied on the Trump campaign through their microwave ovens. Late-night comedians loved that one.

But when the dopey conspiracy theory intersected with Trump's interest in discrediting Special Counsel Robert Mueller, the conservative media embraced it in earnest and through the power of repetition it has now become an article of faith on the right that Trump was set up by malign elements of the "Deep State."

Conservatives have long claimed that scientists, academics and the media—sources of information that often contradicts their worldview—are hopelessly biased against them and should not be trusted. In recent years, they added the intelligence and law enforcement communities. Now, after Trump installed loyalists and/or inexperienced acting directors to head those agencies, they're using the same model to discredit the Inspectors General who still enjoy a great degree of independence from the regime's fierce politicization of the federal government.

These silly storylines don't need to stand up to scrutiny. They just need to muddy the waters and give their co-partisans something to hang their hat on. It may be in their movement's interest to constantly muddy the waters, but a well-financed media infrastructure devoted to sowing distrust and disseminating partisan propaganda is a real and under-appreciated threat to our fragile democracy.