'We can't stop being horrified by things like this': Trump attacks Omar and Somali refugee community at Minnesota rally 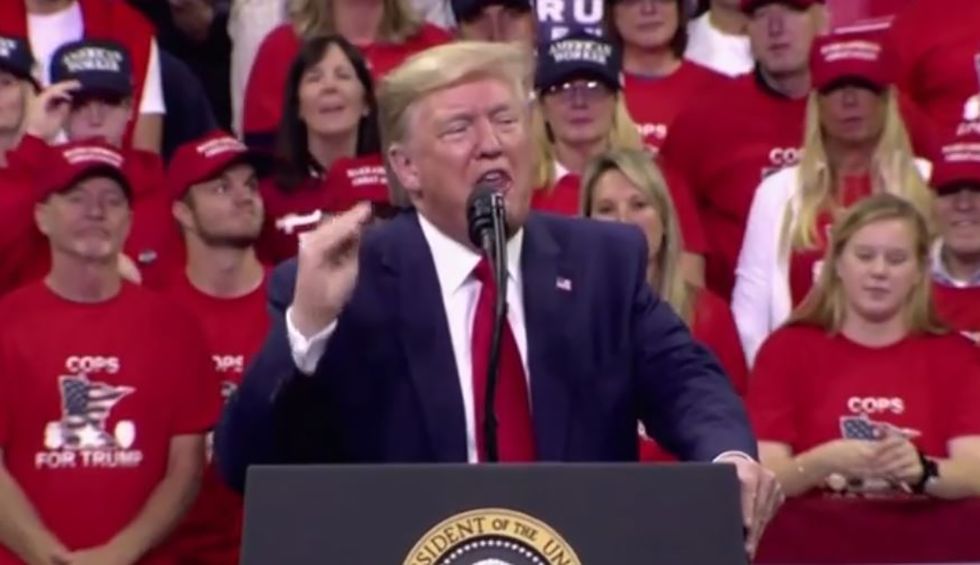 After President Donald Trump launched unhinged and racist attacks on Rep. Ilhan Omar and Minnesota's Somali refugee community during a campaign rally in Minneapolis Thursday night, Omar quickly responded that Trump's hate-filled rhetoric and policies can and must be defeated by a grassroots progressive movement.

"At his rally just now, Trump called me an 'America-hating socialist' and a 'disgrace.' He shouted xenophobic conspiracy theories about me. He scolded my district for voting for me," Omar tweeted. "His hate is no match for our movement."

During the rally inside the Target Center in Minneapolis, which was surrounded by thousands of protestors, Trump once again smeared Omar as an al-Qaeda sympathizer and an anti-Semite and parroted conspiracy theories spread by a right-wing blogger.

In an email to supporters ahead of Trump's event, Omar—who arrived in the United States as a refugee from Somalia as a child—anticipated the president's attacks and vowed to not be deterred from working toward a more just and equitable nation.

"I know Trump will use this rally as an opportunity to attack me," the Minnesota Democrat wrote. "But no Trump smear will ever stop me from working toward what I'm in Congress to do: Pass Medicare For All, raise the minimum wage, repeal the Muslim ban, enact a Green New Deal, and impeach Trump."

Following his vicious rant against Omar, Trump attacked Minnesota's Somali refugee community as a whole, prompting cheers from his supporters.

"Can you imagine being Somali-American and watching this?" asked writer Elad Nehorai. "This is the kind of hate rally seen in authoritarian and fascist countries."

Trump vows to crack down on Somali refugees in a city with one of the largest Somali populations in the country https://t.co/xXM3pffCef
— Aaron Rupar (@Aaron Rupar) 1570759278.0

"We can't stop being horrified by things like this. We can't become numb to them. This is appalling," tweeted activist Sophie Ellman-Golan. "This is what the GOP is championing. This is the side that people clinging to the veneer of bipartisanship are legitimizing. It's racist and xenophobic and incites violence."

The president once again likened the impeachment probe to a coup, declaring during the rally that congressional Democrats are engaged in a "brazen attempt to overthrow our government."

As Trump spoke to a crowd of around 20,000 gathered inside the Target Center, thousands of protestors rallied outside and demanded the president's impeachment: