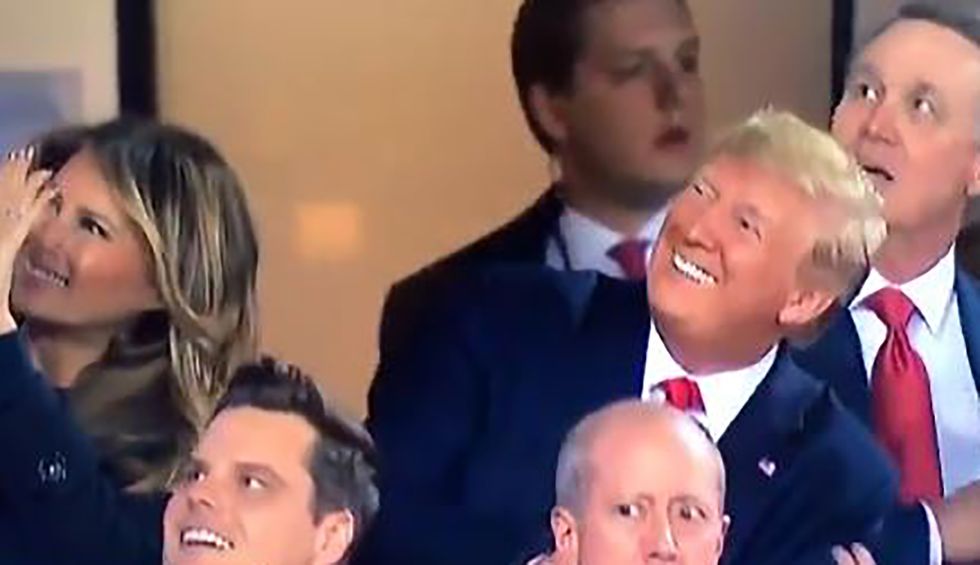 President Donald Trump was greeted with loud and sustained boos, a large "Impeach Trump" banner, and chants of "Lock Him Up!" Sunday night as he attended Game 5 of the World Series in Washington, D.C.

Trump's presence at the game alongside First Lady Melania Trump, White House aides, and a group of Republican lawmakers was announced on the park's public address system after the third inning.

The crowd's reaction was immediate and overwhelming as the stadium's scoreboard panned to Trump, seated in a luxury suite along the third base line:

Peter Dreier, the E.P. Clapp Distinguished Professor of Politics and founding chair of the Urban and Environmental Policy Department at Occidental College, pointed out in Common Dreams Saturday that "Trump prefers to appear before crowds of loyal followers" and "his few appearances outside the White House have been highly orchestrated affairs where the audiences are vetted by the president's operatives."

Presidents often throw out the ceremonial first pitch at regular season baseball games and the World Series, but, as Dreier noted, Trump has repeatedly declined to do so. "Trump was no doubt worried that... he'd be greeted with a deafening chorus of boos as soon as he stepped on the mound at Nationals Park," wrote Dreier.

As the Washington Post reported, "chef and humanitarian José Andrés, who has faced off with Trump in court over scuttled plans to build a restaurant in the Trump International Hotel and has criticized many of Trump's policies," threw the ceremonial first pitch Sunday night.

Slate's Matthew Dessem wrote late Sunday that "after years of horrifying footage of people wildly cheering Trump's deranged rambling at his rallies, it's reassuring—restorative, even!—to know that the rest of the country hasn't forgotten how to greet tyrants."