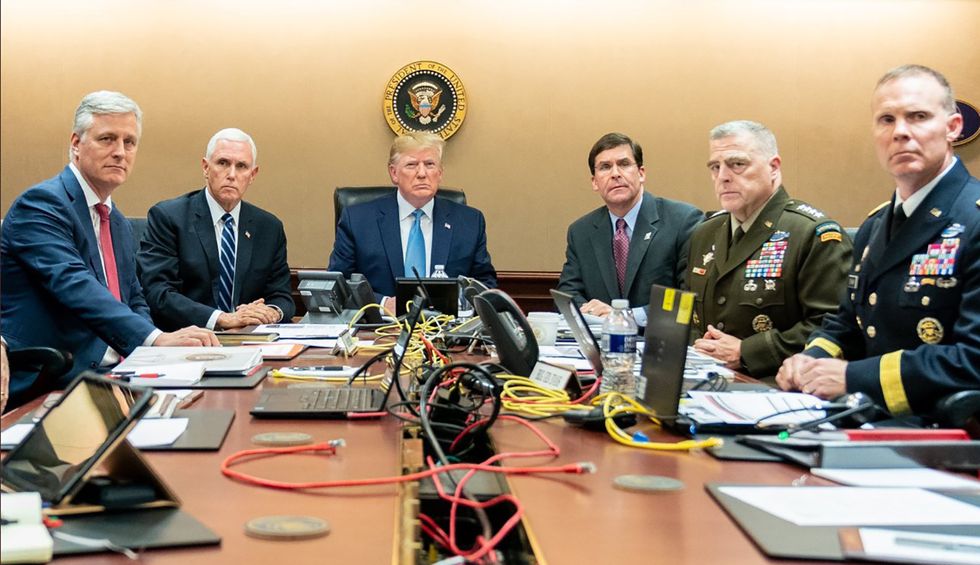 President Donald Trump's announcement Sunday morning that the U.S. military killed Islamic State leader Abu Bakr al-Baghdadi in Syria on Saturday night was peppered with glorifications of the violence that led to the militant's death that critics found unsettling.

"He died like a dog," said Trump of al-Baghdadi.

The president recounted the militant leader's last moments in detail in a Sunday morning news conference:

He died after running into a dead-end tunnel, whimpering and crying and screaming. The compound had been cleared by this time, with people either surrendering or being shot and killed. Eleven young children were moved out of the house un-injured. The only ones remaining were Baghdadi in the tunnel, who had dragged three children with him to certain death. He reached the end of the tunnel, as our dogs chased him down. He ignited his vest, killing himself and the three children. His body was mutilated by the blast, but test results gave certain and positive identification.

Watch President Trump's statement announcing that a commando raid in Syria targeted and resulted in the death of Ab… https://t.co/O2N0FAPAb9
— The New York Times (@The New York Times) 1572185288.0

Trump in his comments celebrated the courage of a military dog that assisted in the raid—a sharp contrast to how the president normally treats the four-legged animals in his rhetoric and in how he described the death of al-Baghdadi.

"He both praised a dog and described Baghdadi as having died 'like a dog,'" The Intercept's Medhi Hasan told Common Dreams. "Tells you much about his thought process—or lack thereof."

The picture's metadata, said photojournalist Pete Souza, indicates it was posed well after the fact, not taken live.

Trump did not notify Democratic congressional leaders, including House Speaker Nancy Pelosi, of the raid beforehand, claiming he was concerned about "leaks." Pelosi, in response, demanded the administration brief the House on the action.

Greenwald, on Twitter, wondered how the tension between Democrats' instinct to criticize the president would reconcile with their past praise of Obama's bin Laden raid.

"It's genuinely fascinating watching Democrats in real time struggle to figure out what to say about this," said Greenwald. "They want to be patriotic and anti-ISIS, but also need a way to malign Trump without contradicting their gushing Obama praise over OBL: not an easy balancing act. Good luck!"