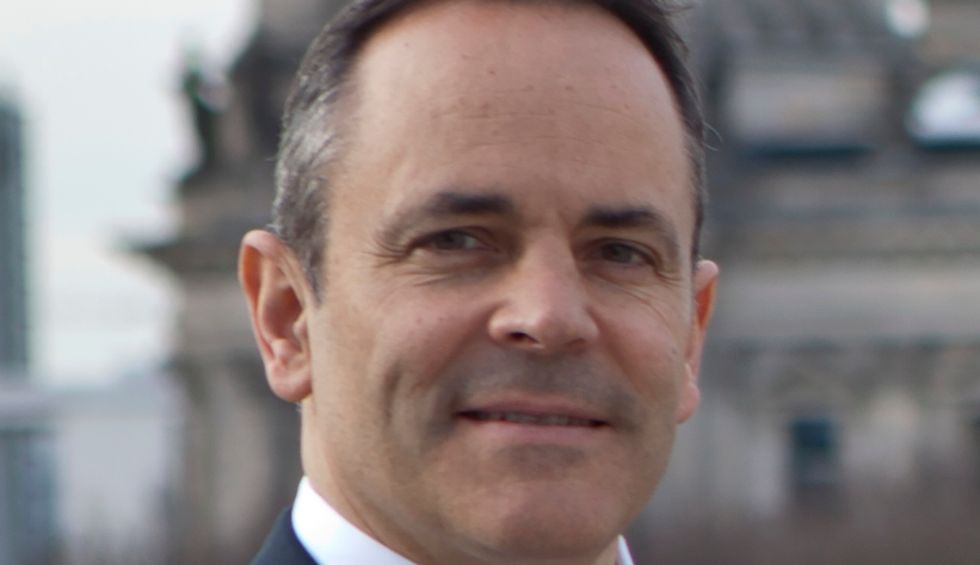 Just how bad do you have to be to lose re-election as the right-wing conservative incumbent in one of the reddest states in the union?

I ask because that’s exactly what is happening right now in Kentucky. The election is less than a month away, and Matt Bevin is ranked the most unpopular governor in the US, with an approval rating barely above 30%. According to the latest polling, Democratic Attorney General Andy Beshear is beating out Republican Matt Bevin by nine points. Even a conservative prognosticator has now been forced to project this race as a “Weak Dem Gain”.

As I have mentioned before, the RNC and the Trump Campaign have disastrously merged into one Frankenstein unit, and although the RNC is raking in big money from its donors, Trump plans on using the overwhelming haul mainly for himself.  Nonetheless, his close buddy Bevin is flailing, and it would look really bad for Trump to lose this one. So instead of money, Trump told him he is getting something even better:  gracing the state with his presence.

The White House is planning an 11th-hour push to stave off an embarrassing defeat for the Republican governor of Kentucky, with President Trump and Vice President Mike Pence expected to make separate trips to the state in the runup to the Nov. 5 election.

A large hate rally with the president ranting against impeachment, brown-skinned people, and the media. Of course, his dead-end, die-hard fanatics will show up, but they really weren’t in any danger of not voting for a Trump sycophant anyway. The people Bevin really needs are the ones who actually can’t afford to take off for a mid-day rally, and have no interest in listening to a meandering human cartoon who will likely spend the majority of the time talking about how great and totally non-treasonous he is.

No sane person wants to listen to a crazy person ramble.  The only thing worse than that would be listening to Mike Pence, whom not even Trump supporters can stomach attending his events.

Of course, anything would be better than Don Jr’s rally for Bevin last August. Here’s how that went down:

Organizers have asked the audience to move out of the seats and closer to the stage ahead of Trump Jr/ Gov. Bevin e… https://t.co/fJt4Bdk9Mu
— Ryland Barton (@Ryland Barton) 1567104479.0

The question you might be asking is “how”?  How did things get so bad in Kentucky that the GOP would need to focus on a state that Trump easily won in 2016?

First of all, Bevin just sucks at his job. I mean, he really sucks. Kentucky is ranked 46 out of 50 for fiscal health. This was due, in part, to the massive tax subsidies that Bevin insisted be given to out-of-state CEOs. To try to stem the bleeding, Bevin tried to gut teacher and public servant pensions. Bevin signed a grotesque law that perverted their pensions, and was rushed through the GOP legislature on the very last day of the session. Lawmakers refused to give a copy to the public until after they had voted on it.

So many teachers protested that 30 school districts closed down. The Attorney General, who is also Bevin’s opponent, Andy Beshear, sued saying that the state constitution requires three votes on three separate days. The state Supreme Court agreed and smacked Bevin down.

As far as healthcare goes, Kentucky had, by far, the best success story of the Affordable Care Act. Bevin’s predecessor was a Democrat, and he opted for Medicaid expansion and for setting up Kentucky’s own state health exchange (Kynect). For the first time in state history, every citizen had access to affordable health insurance. It was wildly popular, over a million people registered, and the state’s uninsured rate dropped from 20% to 9%. Ignoring all success, Matt Bevin was determined to dismantle it. He dismissed it as “Obamacare”, and then sabotaged and essentially destroyed it, limiting healthcare access for hundreds of thousands of Kentucky families.

Second, Bevin is an asshole. He really has earned this reputation. Like Trump, he does late night tweets that are, frankly, juvenile and embarrassing. He personally mocked the protesting teachers, calling them misbehaved children. He also said he “guarantees” girls were “sexually assaulted” because teachers were out protesting against him instead of teaching. Nice.

Even worse, he blamed the teachers over a young girl’s shooting. She was shot accidentally by her brother, who discovered the loaded gun in the house while the caregiver was outside.  Yet somehow, the irresponsible caregiver or the easy access to the loaded gun was not to blame here. It was the teachers fighting for their livelihood.

The gun is never to blame in Matt’s world. The Parkland shooting? He said it was video games.

Bevin even lost the support of the coal miners; although to be fair, they seem to be much more angry at Mitch McConnell.

When Bevin visited a minority school, he marveled that there was actually a chess club there. He said that was “not something you necessarily would have thought of when you think of this section of town.” Again, nice.

Just to underscore how awful he is, Bevin was the headline speaker at a pro-cockfighting rally. Seriously, because why wouldn’t he be?

Third, he’s a monster to children. As an anti-vaxxer, he decries school mandated vaccines.  Instead of getting his own children vaccinated, he bragged that he forced his kids to get exposed at a “chickenpox party”. For the record, purposefully giving your child chickenpox is a bad, bad, bad idea.

Regarding last February’s record freezing temperatures, Bevin complained about parents being weak for wanting schools cancelled because their kids would have to travel in subzero windchill. Al Roker wasn’t having any of it:

Instead of being a source of constant embarrassment, AG Andy Beshear is running on a popular platform.

His rallies don’t consist of just insulting his critics and childish name-calling. Beshear took the radical approach of actually talking about things that matter to Kentuckians. Everyone who meets him knows his passion for strengthening Kentucky's struggling schools, getting affordable healthcare back, bringing in jobs and funding jobs training, and having a sane energy policy that includes both renewables and clean-coal technology.

Although Trump is still above water in Kentucky, it hasn’t carried over for Matt Bevin. The people of Kentucky hate him, and don’t have any trouble voting for a Democrat for governor. In fact, the one before Matt Bevin was Steve Beshear—Andy’s father.

Matt Bevin has simply proven to be too much, even for deep red Kentucky. Luckily, Andy Beshear has been crushing it.

The deadline to register to vote has passed, but we can still help him out in this final stretch by GOTV and/or by donating.

Please give what you can: