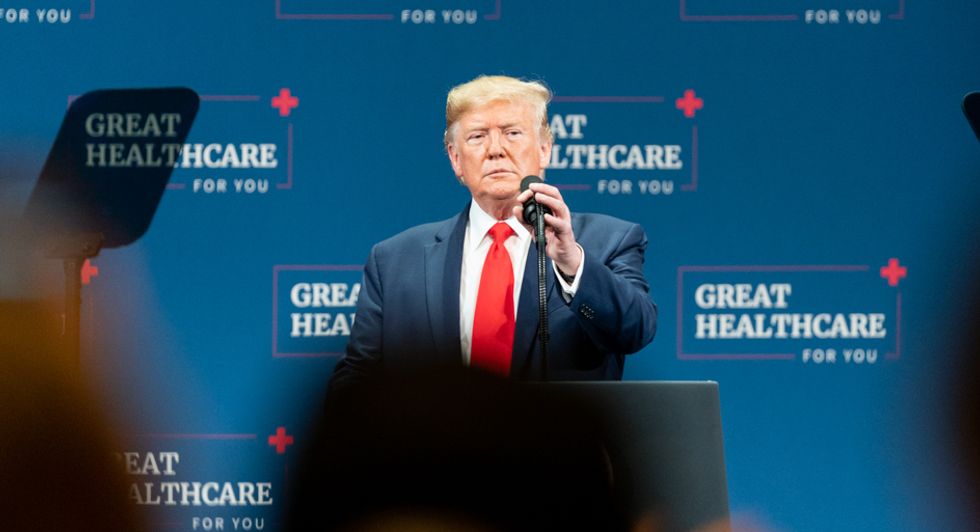 Watch out, older Americans and people with disabilities! President Trump just announced a plan to give corporate health insurers more control over your health care. His new executive order calls for “market-based” pricing, which would drive up costs for everyone with Medicare, eviscerate traditional Medicare, and steer more people into for-profit “Medicare Advantage” plans.

Seema Verma, the Trump appointee who heads the Centers for Medicare and Medicaid Services (CMS), may not have warned Trump about the slew of government audits revealing that many Medicare Advantage plans pose “an imminent and serious risk to the health of… enrollees.” They also overcharge taxpayers to the tune of $10 billion a year.

In the last few years alone, CMS’ limited audits have highlighted major issues with Medicare Advantage plans. Reports from the Department of Health and Human Services Office of the Inspector General (OIG) and Government Accountability Office (GAO) have underscored these issues. They have recommended that CMS increase its oversight of Medicare Advantage plans and its enforcement efforts.

A Medicare Payment Advisory Commission report indicates that the problems with Medicare Advantage may be even more far-reaching than the government audits indicate. The Medicare Advantage plans have failed to turn over reliable and complete claims data, as required by law. Without this data, it’s not possible to know whether they are covering the health care services they are paid to provide or to oversee them to the extent necessary.

The insurers’ wrongdoings are systematic. They are ongoing. They endanger the health and financial well-being of millions of people. They undermine the financial integrity of the Medicare program and harm the U.S. Treasury. Yet, to date, CMS has failed to develop, let alone execute, a plan to hold these insurers accountable for violating their legal obligations and to ensure their members get the health care to which they are entitled.

Tens of billions in overcharges are one big problem. Medicare Advantage plans have been overcharging the government for their services for many years now, by claiming that their members are in worse health than they actually are in order to increase payments. To make matters worse, they have refused to pay back the tens of billions in overpayments that the federal government has made to them. UnitedHealth successfully fought to keep the government from collecting this money.

Another major concern is that Medicare Advantage plans are failing to cover the care their members need and are entitled to. Government audits show that Medicare Advantage plans are inappropriately delaying and denying care and coverage to hundreds of thousands (if not millions) of their members. This puts patients’ health and safety at risk. Thousands of people end up paying for care that should have been covered—or foregoing care altogether.

CMS has not named or flagged these corporate health plans on its Medicare website or notified people in any other way of plans with serious violations, as it had agreed to do at the recommendation of the Office of the Inspector General. So, people with Medicare are unaware when they enroll in a Medicare Advantage plan that the government has found to be jeopardizing the health and safety of its members. Instead, CMS continues to give four- and five-star ratings to some of these health plans. In the process, it misleads older adults and people with disabilities about their performance.

What’s more, CMS has found that a sizeable number of Medicare Advantage plans have for years issued highly inaccurate provider directories; and, the GAO has noted “concerns about ensuring enrollee access to care.” Many of these health plans have narrowed their provider networks. GAO suggests that it is not at all clear which of these Medicare Advantage plans have an adequate number and mix of health care providers in their networks.

To date, the Trump administration has been steering people into Medicare Advantage plans, without regard to their deficiencies. And, it has failed to provide people with Medicare with meaningful information about their health plan choices as required by law. It is on a reckless path, promoting the business interests of Medicare Advantage plans that violate the law over the health care needs of vulnerable Americans.

The administration and its congressional allies are playing a game of bait and switch with older adults and people with disabilities. They allow Medicare Advantage plans to lure people with benefits that traditional Medicare does not offer, such as dental care and transportation services to the doctor, without exposing their failings. The Trump administration’s goal is to fully privatize Medicare and shift more costs onto older and disabled Americans.

To be clear, Trump’s executive order does nothing to hold the Medicare Advantage plans accountable for their fraudulent overcharges or their inappropriate denials of care and coverage. Rather, it rewards them. It gives them even more discretion regarding the services they cover and the freedom to create new bells and whistles to lure in members. The health and financial well-being of older and disabled Americans hangs in the balance.