Throw out the first pitch at the World Series? Trump doesn't have the guts 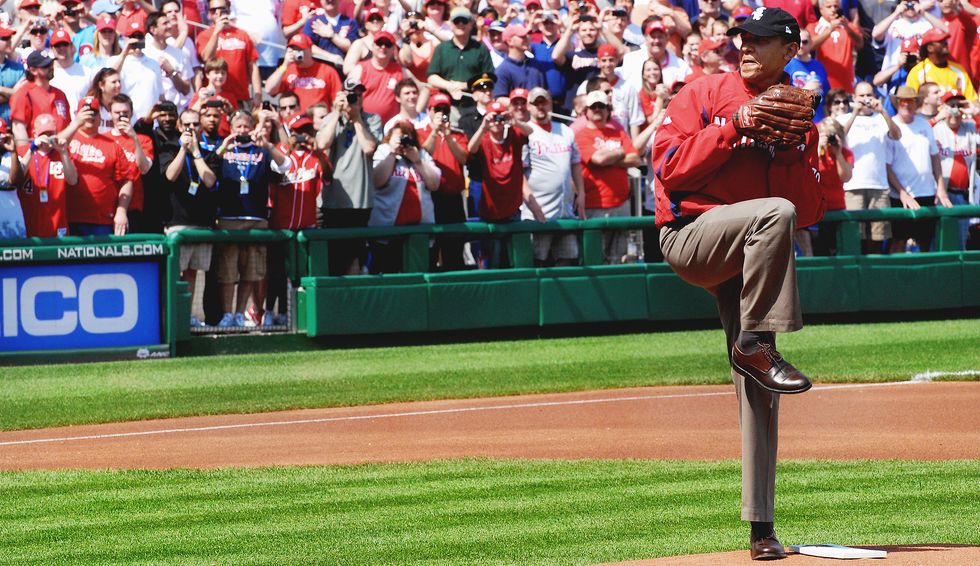 In a recent episode of the TV series Madam Secretary, President Elizabeth McCord (played by actress Tia Leoni) has a nightmare about her scheduled appearance at a Mets-Cubs game to throw out the ceremonial first ball.  She dreams that her errant pitch hits the Mr. Met mascot and she's showered with boos from the fans at Citi Field in New York.

President Donald Trump has no doubt been having similar nightmares.  Since becoming president, he's declined to toss the first pitch on opening day or during the World Series. Trump likes to wear baseball caps adorned with the words "Make America Great Again" across the front. But offered a chance to wear a real major league baseball cap in a real baseball stadium, he's balked.

In yet another break from tradition, Trump declined an invitation to throw out the ceremonial first ball at the Washington Nationals' opening day game in 2017.   Last year and again this season, Trump was missing-in-action on opening day. Nor has he followed his predecessors' custom of tossing the first pitch in the World Series.

Trump prefers to appear before crowds of loyal followers. Since he took office, his few appearances outside the White House have been highly orchestrated affairs where the audiences are vetted by the president's operatives.

But this year, after much dilly-dallying, he promised to attend the fifth game of the World Series between the Washington Nationals and Houston Astros, which will take place on Sunday at Nationals Park in D.C.  Whether he would take the mound to throw out the first pitch was a matter of much debate. As late as Thursday, he told reporters in the Oval Office that he was not sure if he would throw out the first pitch.  Then, on Friday night, Major League Baseball Commissioner Rob Manfred revealed that Trump had again demurred from participating in the first-pitch ritual. Recounting his conversation with Trump, Manfred said that the president would attend the game but had opted out of throwing the first pitch or making an on-field appearance.

"His view," Manfred explained, "was that in order to make the fan experience as positive as possible, he would arrive at Game 5 sometime after the game began so it wouldn't interfere with fans getting into the stadium. Quite frankly, we were very grateful for that. We thought it was a great decision on the President's part."

With the exception of Jimmy Carter, every president has tossed the first pitch on opening day at least once during their presidencies since William Howard Taft inaugurated the practice in 1910 at the Washington Senators' Griffith Park. (There was no Major League team in Washington, D.C., when Carter was president, so he chose to throw out the first ball in the 1979 World Series).

These presidential outings have not been without controversy. Herbert Hoover was booed mercilessly when he showed up at Game 3 of the World Series between the visiting St. Louis Cardinals and the home team Philadelphia Athletics in 1931, in the midst of the Great Depression.   As reporter Joe Williams reported in the New York World-Telegram, the boos started slowly but then "the grow in volume and pretty soon it seems almost everybody in the park is booing. They are booing the President of the United States."  Williams continued: "This must be the first time a President ever has been booed in public, and at a ball game of all places. There is something about a ball game that is supposed to make everybody kin and it's a high honor to sit in on a ball game where the President becomes a fan, just as you and I."  But, according to baseball historian Marty Appel, neither the New York Times nor the Associated Press mentioned the baseball boo-birds. "All in all, it was a great day for the President," the Times reported, in a story that one can only describe as fake news.

Trump was no doubt worried that, like Hoover, and like the fictional President Elizabeth McCord, he'd be greeted with a deafening chorus of boos as soon as he stepped on the mound at Nationals Park.

In addition to the likely boos, Trump might have also been worried that he'd embarrass himself if he couldn't hurl the ball from the pitchers' mound to home plate, 60 feet-six inches away, or if he wound up and wildly flung the ball over the catcher's head into the backstop. The video of his athletic misadventure would surely go viral.  Whom could he blame for the humiliation? The groundskeepers for failing to properly manicure the mound? The workers who sew MLB's baseballs in a sweatshop owned by Rawlings in Turrialba, Costa Rica?

That would be particularly embarrassing for a president who claims to be in excellent physical shape.  As Trump watchers will recall, in December 2015, Trump's personal physician Dr. Harold Bornstein wrote a letter indicating that "If elected, Mr. Trump, I can state unequivocally, will be the healthiest individual ever elected to the presidency." Bornstein later revealed that Trump had "dictated the whole letter."

Trump was a good athlete at his high school, New York Military Academy, but typical of the president, his boasts about his prowess undermine his credibility. Trump bragged to  Pulitzer Prize-winning author Michael D'Antonio, who wrote The Truth About Trump, that he was "the best baseball player in New York when I was young."  On April 3, 2013, Trump tweeted that: "I played football and baseball, sorry, but said to be the best baseball player in New York state-ask coach Ted Dobias-said best he ever coached."  Interviewed in 2016 at age 90, Dobias recalled that Trump was a "god athlete," but didn't substantiate Trump's hyperbole about this baseball skills.  "I'd give him an 8 1/2 out of 10," Dobias said.

During his days as a celebrity businessman, Trump threw out the first pitch at several major league games.  The last time was in 2006 at Boston's Fenway Park before a game between the Red Sox and the New York Yankees. Photos of that event reveal Trump with an awkward grimace,  struggling to look athletic. In the 13 years since then, the 73-year old Trump has gained considerable weight. He doesn't exercise and he follows a strict diet of unhealthy junk food.

Mark Lerner, now the team's principal owner, who also is a big donor to Democratic candidates, was diplomatic about the president's potential visit to the Nationals-Astros World Series game.

"Well, he has every right to come," Lerner told the Washington Post on Friday night. "He's the president of the United States whether you like him or not. It's a special event. He should be at it."

But Lerner disputed Commissioner Manfred's chronology of events, insisting that he had already picked someone else to throw out the first ball before game five before Trump told Manfred that he wasn't interested.

"The first pitches are our call, and we felt there are many other candidates that should be considered before [Trump]," Lerner told the Post.

Lerner said that he had already invited chef  and humanitarian José Andrés, who is admired around the world for founding World Central Kitchen, a nonprofit that serves meals to victims of natural disasters, to perform the task. Andrés has had a long-running feud with Trump.  In 2016, he withdrew from plans to open a restaurant in Trump International Hotel in Washington, after then-candidate Trump's racist comments about Mexican immigrants. Later that year he spoke at a "get out the vote" rally for Hillary Clinton rally in Tampa, Florida. After Trump took office,  Andrés criticized his policies on immigration and his response to Hurricane Maria in Puerto Rico. Earlier this year, he opened a World Central Kitchen on Pennsylvania Avenue, not far from the White House, to feed federal workers who were furloughed during the government shutdown.

Lerner also said that once Trump arrives at Nationals Park, he'll sit with league officials rather than with him and other Nationals executives.

Mark Lerner took over control of the Nationals from his father Ted, who owned the team from 2006 until last year.  Ted Lerner is a wealthy real estate developer who, like his son, donates to Democrats. Unlike the president, the older Lerner didn't inherit his business empire. In 2015, accepting an award from the Urban Land Institute, Ted Lerner recalled that as a teenager, he worked as an usher at Griffith Stadium, home of the Washington Senators, the Nationals' predecessor.

"I never could've dreamed of owning a baseball team. And I never could've imagined over my life that I would build over 200 million square feet of commercial and residential space and that very few people would know my name. I guess I have a different approach to real-estate development than Donald Trump."

In Madam Secretary, as President McCord starts walking onto the infield at Citi Field, she's greeted with a smattering of boos, but reminds her nervous husband that "They're just exercising their First Amendment rights." When she gets to the mound, the Mets catcher is standing a few yards in front of home plate in order to make it easier for the president, but McCord—who had been practicing throwing a baseball in a White House hallway—insists that he get behind home plate, then throws a strike into his catcher's mitt, and the crowd erupts in enthusiastic applause.

Through practice and perseverance, the fictional president turned her nightmare into a better reality. But our real president, too afraid to take the mound and face the fans, has turned our dreams into a nightmare.