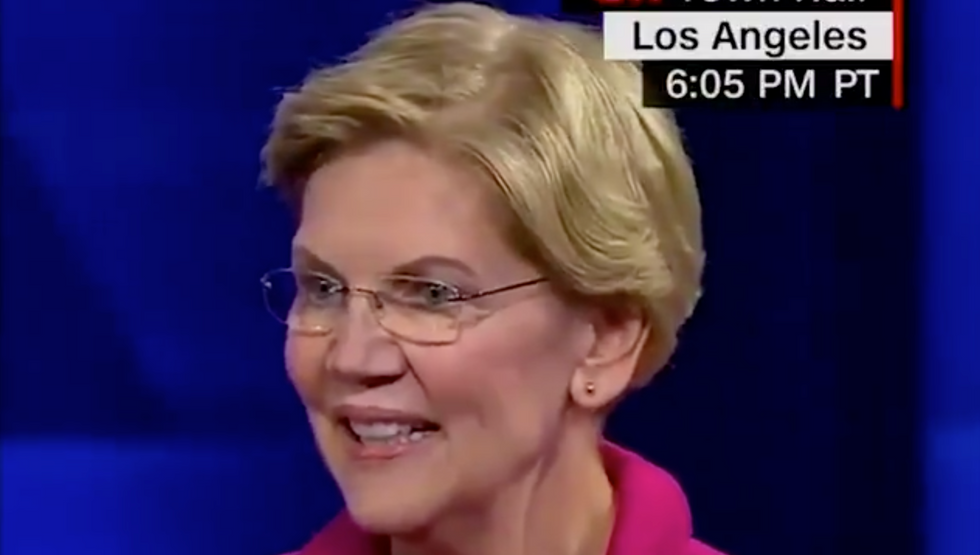 In a groundbreaking move, CNN and the Human Rights Campaign hosted a Democratic primary town hall discussion Friday night centered on issues affecting the LGBTQ community. It was a remarkable event, especially given the fact that some gay people themselves — Mayor Pete Buttigieg, Anderson Cooper, and Don Lemon — were featured in the discussion.

But two moments of the town hall, in particular, jumped out at me — in part because they each caused a stir online.

At different points in the night, both Beto O'Rourke and Sen. Elizabeth Warren (D-MA) made comments that were guaranteed to infuriate religious conservatives. But while Warren's comments were defensible and likely even tactically wise, O'Rourke's remarks should, in my view, be considered a serious misstep in his struggling campaign.

Here's Warren's moment, which has garnered a lot of attention (her campaign clearly recognized that it played well for her):

How would I respond to someone who says marriage is between one man and one woman? #EqualityTownHall https://t.co/8uNXqXI5n7
— Elizabeth Warren (@Elizabeth Warren) 1570760831.0

Asked how she would respond to a hypothetical person who says marriage is between one man and one woman — in contrast to her views on marriage equality and the ruling precedent of the Supreme Court — Warren gave a quippy response. She said, assuming she was talking to a man, "And I'm gonna say: Just marry one woman! I'm cool with that."

Then she added, with not a little bit of snark: "Assuming you can find one!"

After a substantial amount of laughter from the audience, she went on to explain how her views about equality are rooted in the faith tradition she grew up in.

Ziegler is certainly far too confident in this prediction, and his claim isn't well supported by polling. Polls consistently show that approval of same-sex marriage is above 60 percent nationwide. And a 2017 survey from PRRI found that, in swing states like Pennsylvania and Florida, opinion matches the national averages. Sixty-one percent of Florida residents approved of same-sex marriage in that survey, and approval was up to 64 percent in Pennsylvania. So Warren's comic rebuttal isn't likely to make a big dent in either state; indeed, same-sex marriage hardly seems likely to be a flashpoint in the election at all. And showing a more jovial and personable side of her personality may even help Warren, especially in the primary.

Of course, whether the remark hurts her is different from whether it was appropriate. Was Warren being smug and too dismissive of conservative religious believers? There's a case to be made that presidents or candidates shouldn't ever say anything even somewhat critical about a even a hypothetical constituent, so the "Assuming you can find one" jab was perhaps tougher than was needed. But her basic response is warranted. She appropriately and succinctly made the point that personal objections to same-sex marriage are not relevant to public policy. And had she given the question more consideration and credence than it was due, she would have been elevating the idea that discriminatory beliefs should have a say in decent policy. By just rejecting the suggestion outright — after the country has been through a years-long battle over the issue, resulting in a major Supreme Court case — she stands firmly beside her LGBTQ constituents and their rights, as she should. There's not really a middle ground for her to stand on. We should similarly expect that she wouldn't take a suggestion that interracial marriage is inappropriate seriously, either.

O'Rourke's moment, however, showed much less wisdom in a different moment:

Beto O’Rourke on religious institutions losing tax-exempt status for opposing same-sex marriage: "There can be no r… https://t.co/AnKGssdrDB
— CNN (@CNN) 1570761327.0

O'Rourke argued that religious institutions — even churches — should lose their tax-exempt status if they oppose same-sex marriage. While some progressive cheered this argument, it is deeply misguided.

Most importantly, it is almost certainly unconstitutional. The First Amendment has been consistently interpreted to mean that the government can't distribute benefits — such as tax-exemption — in a way that discriminates against organizations and people based on their religious beliefs. That's exactly what O'Rourke's idea does.

Michael Wear, a veteran of President Barack Obama’s re-election campaign who focused on faith issues, was fiercely critical of the position, as NBC News reported.

“If that isn’t a religious freedom violation, I don’t know what is,” he said. “It’s so facially unconstitutional that it’s hard for people to believe there isn’t ill will involved in even suggesting it.”

Now, there are separate arguments about whether religious institutions should, as a matter of policy, get tax-exempt status just because they're religious institutions. That's an important subject of debate. But O'Rourke isn't addressing that — he's simply saying that a religious group should be punished by not receiving benefits that others receive for holding a specific viewpoint.

O'Rourke's view is also distinct from a much more complex matter of anti-discrimination laws and regulations as applied to religiously-affiliated businesses, corporations and organizations. Should, for example, religious universities that discriminate against LGBT students and staff get tax benefits or other forms of government funding? I would argue they shouldn't, just as they shouldn't receive government benefits if they have discriminatory policies toward women or people of color. And if a business or institution violates anti-discrimination law, it can't use its religious beliefs as an excuse for this violation.

But that's different from saying churches or religious organizations themselves should be punished just for having particular sets of beliefs. They shouldn't — whether those beliefs are racist, homophobic, transphobic, or sexist — or, for that matter, if those beliefs are in line with progressive views.

That principle has long recognized as been a key tenet of American law, even if it is often tested. O'Rourke makes a big mistake by proposing it should be undermined — one that could easily backfire.