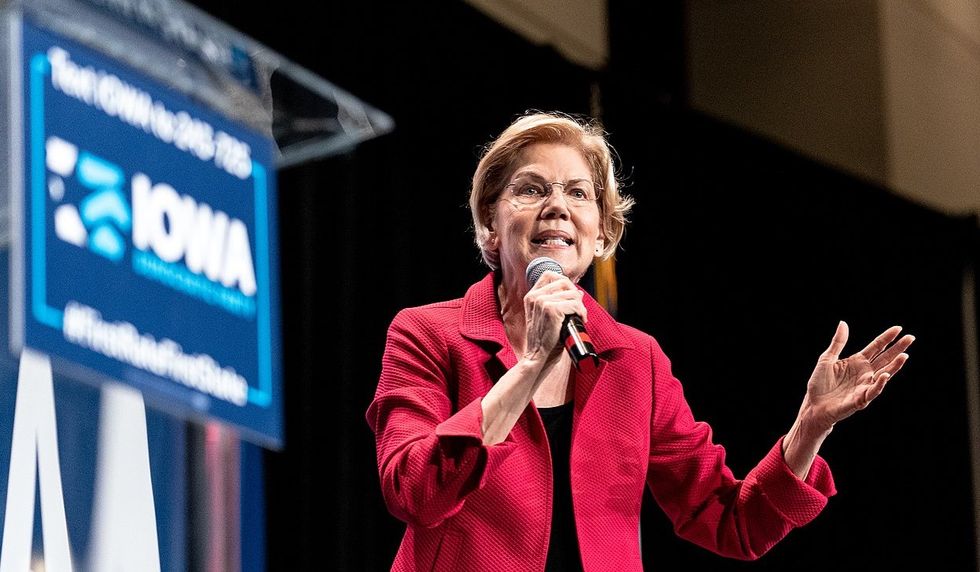 Sen. Elizabeth Warren has risen impressively in the Democratic presidential primary polls recently, so even as President Donald Trump continues to press his bogus and hypocritical smear about former Vice President Joe Biden in Ukraine, some branches of the right wing are setting their sights on the Massachusetts lawmaker.

Of course, there's been long-simmering questions about the fact that she previously identified as Native American, citing family lore, though she has admitted that was a mistake and has apologized. But it's not clear that scandal has or will damage her enough for conservatives' likings, so they needed to find something else. First, fraudster Jacob Wohl launched a bizarre and obviously fake attack on Warren that was regarded as a joke from start to finish.

But on Monday, the conservative site Washington Free Beacon launched a new attack that is more likely to have staying power, even though it is, at least for the moment, completely baseless.

The Riverdale Board of Education approved a second-year teaching contract for a young Elizabeth Warren, documents show, contradicting the Democratic presidential candidate’s repeated claims that she was asked not to return to teaching after a single year because she was "visibly pregnant."

The only problem with the story is that the documents Anderson provided show no such thing.

He reported that the board approved Warren for a second-year contract on April 21, 1971. Then on June 16, two months later, the documents show that the board accepted her resignation "with regret."

Never once in the article does Anderson actually explain how these findings contradict Warren's story. Which make sense, because they don't. The only mystery that remains is why an editor, even at a conservative publication, would let the story have a headline and a lead paragraph that are unsupported by the story itself.

As Ryan Grim, D.C. bureau chief for the Intercept observed: "I used to be a substitute teacher and I never went before the board of education. I'm sure they just submitted my name and it was approved. At that level, the boards just rubber-stamp principals' decisions. And principals don't tend to write 'fired for pregnant' on the forms."

There's no reason to think the principal in question couldn't have discovered Warren was pregnant after her second-year contract was approved and then pressured her to resign. That is completely consistent with the Beacon's findings, yet the story confidently declares that its records contradict her claims. They just don't. It's true that the records don't say she was asked not to return because she was having a baby, but no one should have expected that they would.

As Anderson himself explained, this attack on Warren's past actually first came from the left wing, not the right. Journalist Meagan Day from Jacobin magazine claimed that Warren's story of why she left teaching was different when the then-law professor recounted it in a 2007 interview. Warren explained at the time:

I was married at nineteen and graduated from college after I'd married, and my first year post-graduation I worked in a public school system with the children with disabilities. I did that for a year, and then that summer I didn't have the education courses, so I was on an "emergency certificate," it was called. I went back to graduate school and took a couple of courses in education and said, "I don't think this is going to work out for me." I was pregnant with my first baby, so I had a baby and stayed home for a couple of years, and I was really casting about, thinking, "What am I going to do?" My husband's view of it was, "Stay home. We have children, we'll have more children, you'll love this." And I was very restless about it.

But again, this story isn't inconsistent with her story of being dismissed for being pregnant. Perhaps you might find it odd that she didn't mention that fact in this interview, but people emphasize different parts of stories in different settings and for different reasons.

Conservatives are clearly read to run with the smear against Warren. White House counselor and chief Trump battering ram picked up the narrative quickly, apparently without any scrutiny or interest in accuracy:

Now, it's certainly possible Warren lied about her past. I don't have evidence that supports her story. And one of the problems with smears is that, even by addressing them, you leave readers with some questions in their minds about whether the smear might be true.

But I can say this confidently: The Washington Free Beacon, despite its bold claims of finding contradictory evidence to Warren's story, found nothing of the sort. It found some records, and simply asserted that they were at odds with her narrative, when in fact they are entirely compatible. On its face, this supposed news story is a contemptible and deceptive hit job.