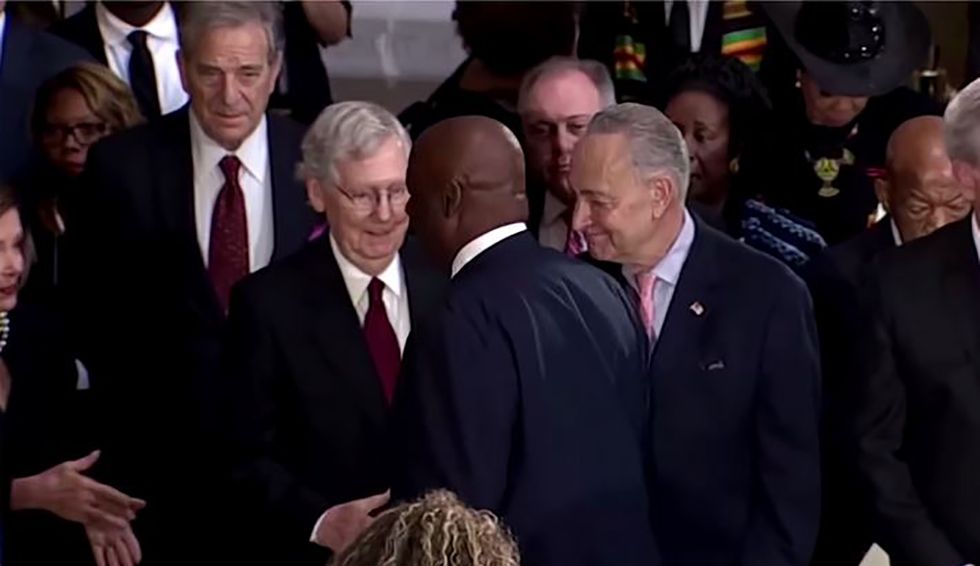 Video of a man snubbing Senate Majority Leader Mitch McConnell at a memorial for the late Rep. Elijah E. Cummings has gone viral. And according to a report by Allyson Chiu for the Washington Post, the man — 64-year-old Bobby Rankin — had personal reasons for refusing to shake McConnell’s hand.

Although McConnell was ready to shake Rankin’s hand, Rankin (a close friend of Cummings) walked right past him. Many who saw the video assumed that it was simply a matter of partisan politics: Republican McConnell has been a bitter partisan, and Democrat Cummings (who chaired the House Oversight Committee and died on October 17 at the age of 68) was among the leaders of the impeachment inquiry against President Donald Trump. But Chiu, in her report, stresses that Rankin’s disdain for McConnell is “much more personal” than the usual partisan politics in Washington, D.C.

Rankin’s brother, Jerry Rankin, died from cancer in October 2018 after being exposed to contaminated drinking water while serving in the U.S. Martine Corps. And according Chiu, Jerry Rankin never received the veterans benefits he was owed before he died and partly blamed McConnell for it.

“Elijah Cummings reached across party lines trying to help my brother get his military benefits, and Mitch McConnell was one of the persons he reached out to,” Bobby Rankin told the Washington Post.

After leaving the Marines more than a decade ago, Chiu explains, Jerry Rankin was diagnosed with multiple myeloma — which is a form of cancer and is among the many health problems that has been linked to the contaminated water at Camp Lejeune (where he was stationed). Problems with the water at Camp Lejeune, according to the U.S. Department of Veterans Affairs, go back to the 1950s.

Friday, October 25 marked the first anniversary of Jerry Rankin’s death. And it was also the day of Cummings’ funeral, which was held in Baltimore (the late congressman’s home town) and was attended by thousands of people — including two former presidents: Barack Obama and Bill Clinton.

Bobby Rankin told the Washington Post, “I could not put my hands in the man’s hand who refused to help somebody who served his country…. I couldn’t do it, because I was thinking about my brother.”