The job of being a Christian isn’t just being kind and forgiving. It’s making trouble for those who abuse their power 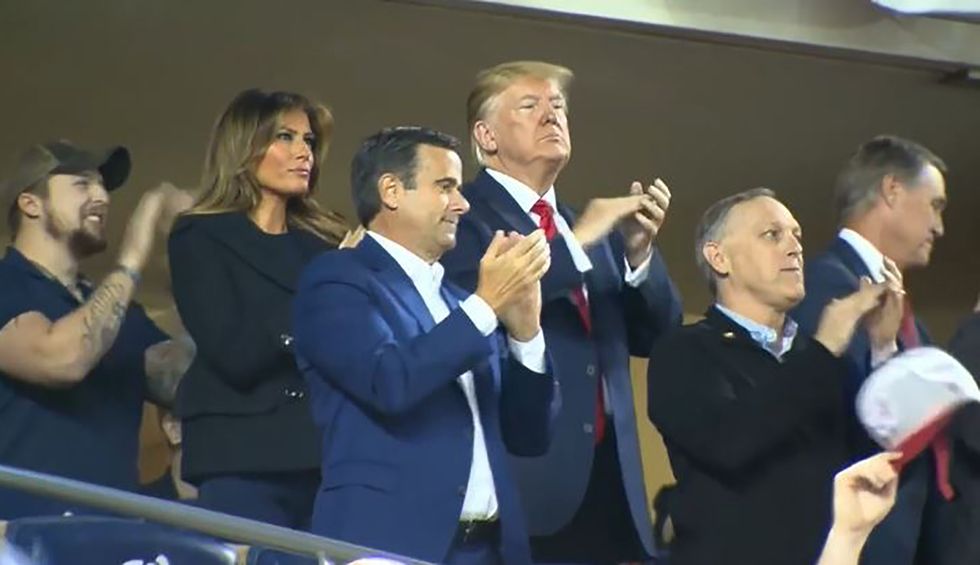 I don’t really know, if Jesus walked among today, his bucket list would include “Boo the president of the United States at a ball game” or “Kick Sarah Huckabee Sanders out of his restaurant” or “Take a pass on shaking Mitch McConnell’s hand.” But there’s definitely enough room in my Christian heart to believe it would be a totally viable option.

When Donald Trump and his handpicked phalanx of lickspittles appeared on the Jumbotron at Nationals Park Sunday evening, he surely did not imagine that he would be greeted with a loud chorus of boos and chants of “Lock him up!” from the all-American baseball loving fans in the stands. I know schadenfreude isn’t a virtue, but I confess to the sin of savoring that baffled look on his face like it was an ice cream sundae. Such an overwhelming public display of disgust. Such a satisfying use of his own rhetoric. For about a minute.

Then the inevitable scoldings arrived, right on time, focusing on the general theme of, “Aren’t we better than this?” I can’t speak to anyone else’s moral compass. But I do find it interesting how much of the tsk tsk-ing seemed to come from publicly identified Christians.

Self-identified Baptist Joe Scarborough took to social media to reproach the “hypocritical clowns” who jeered. His cohost Mika Brzezinski — who has in the past advocated for “the good and kind Catholic Church that I love so dearly” — took a similar stance, tweeting that “I understand the chanting at the game-But, I worry it is dangerous when it happens-On both sides.” As if "both sides" have equal power or values or even science.

Washington Post columnist Megan McCardle, who definitely has a lot to say about what Christians should care about — lamented that “America is increasingly unable to establish even minor basic standards that everyone agrees should apply across parties.” And Democratic senator Chris Coons was swift to express his disapproval as well, telling CNN, “I frankly think the office of the President deserves respect, even when the actions of our President at times don’t.” As a graduate of  Yale Divinity School and a co-chair of the National Prayer Breakfast, Coons no doubt aspires to a spirit of tolerance and love your neighbor-ness he learned in church.

Look, I get it; Jesus was a classy guy. I get that a good many prayerful people aspire not to mirror the behavior of their enemies. But I also remember that Jesus was a stone cold hellraiser. Contrary to what the picture in your grandmother’s living room would suggest, the Jesus of the New Testament was not a lamb-clutching white dude who looked like Jared Leto. He was a troublemaker and a pain in the butt.

Remember the guy who went ballistic when he found moneychangers in the temple? “He made a whip out of cords, and drove all from the temple courts, both sheep and cattle; he scattered the coins of the money changers and overturned their tables.”  Jesus did not play around. He healed on the sabbath, teaching that it’s more important to do the right thing than blindly stick to the rules. He called out the greedy and hypocritical all the time. Would not shut up about it, in fact. Guys, he was literally executed by the authorities, on a trumped-up charge, because he was such a mouthy instigator. It’s a pretty big part of the story!

And when he was on trial, Jesus said that he “came into the world to testify to the truth.” He didn’t add, “But I totally have respect for your office.” Then guess what? His followers were killed left and right for spreading his message, which was already an onerous task before wifi. That's what  we sign up for, Christians.

It seems to me that the job of being a Christian isn’t just being kind and forgiving. It’s making trouble for those who abuse their power. It means not smiling and looking away, or “agreeing to disagree” when confronted with lies, corruption and human rights abuses. I’m not talking about being threatening or violent. I’m talking about just saying, yeah, it’s not my job to make you comfortable in your wickedness. It's not my job to toast you at a party. Jesus commands us to love our neighbors; he doesn’t demand we applaud them. I’m not often a great Christian, but I can say that I try. And when faced with the moral imperative of silence or speaking out, I guess I ask myself, what would Jesus boo?