That waitress who thinks she can write: Waiting tables and crafting a novel in the infamous MFA town 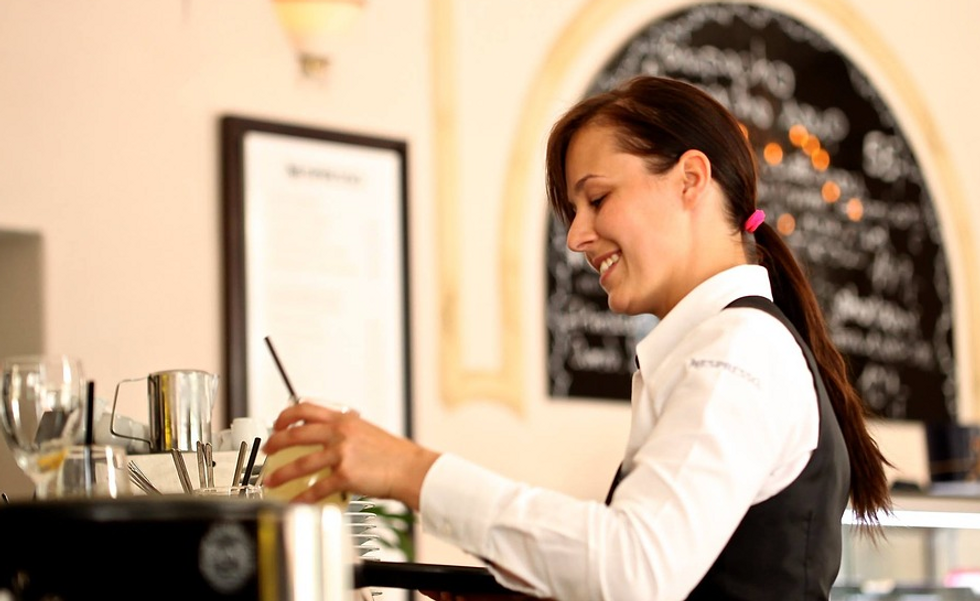 The summer I moved to Iowa City was so hot and wet the gnats multiplied out of control. Locals farmers woke to find their poultry dead, baby chicks smothered by clouds of insects that filled their nostrils and mouths.

I walked downtown to a diner that specialized in turning Cisco canned goods into quirky, inventively named dishes with ridiculous prices. I moved through air that felt like blood or some other bodily liquid. I didn’t even think the Midwest had humidity like this. But what did I know? I had also thought that I would never again find myself in this position: walking to a diner to be trained by a girl more than ten years younger than me. I’d graduated Summa Cum Laude, published half a dozen short stories and written the first third of a novel; but here I was living in the town most famous for its writing program, and I was waiting tables.

When I was younger, customer service jobs hadn’t bothered me. I moved from hostessing to waitressing and then on to more lucrative gigs as a phone sex operator, exotic dancer and fine arts model. The way I made money was always secondary. What was primary was traveling and writing. Seven years before moving to Iowa City, I took a job at a strip club in Asheville, North Carolina with the idea of having my days free to write. I’d realized though that while I had the inspiration, I didn’t have any concrete skills. At the club the other girls talked about college classes, so I’d decided to audit one taught by novelist Katherine Min.

Min stood at the front of the classroom exuding stardom. Her first novel had just come out from Knopf. She was everything I dreamt of being. “Almost certainly, none of you will become authors,” she said. “Not because you lack talent. Talent is only one tiny part, the rest is stubborn pursuit and an ability to overcome rejection.”

By the end of the semester Katherine Min had convinced me to enroll full-time. “You’ve got some talent,” she said, “but that won’t do it. You need to learn discipline.” With her voice at my back I completed my four years and applied to M.F.A. programs.

Some rejections came but that was OK. My partner, who was also a writer, got some rejections too, and then the University of Iowa Nonfiction Writing Program called him. We celebrated. The excitement settled down though, and I was still waiting. And waiting.

And then I was arguing with the owner of a diner in Iowa City who owed me payment for training days.

“Did you clock the hours in?”

“You told me to just write them down.”

“Oh, what do I owe you, like fifty bucks?” He pulled out a thick wad of cash.

“What? I can’t give you that much right now.”

He raised his eyebrows. “You’re tough.” He laughed. “I usually just put the girls off until they get tired of asking.”

I had tried to find a job that had something to do with my degree. The closest I got was a front-of-house theatre position that paid so little I wouldn’t have been able to make rent. My partner and I lived out by Walmart and Dairy Queen. Apartments were cheaper, and I liked the separation. It made me feel less sad about not being a part of the university.

Mostly I felt stupid for having thought that my hard work at a small Southern state school could have gotten me into an M.F.A. program. At Iowa, in the fiction and poetry programs at least, nearly every single student had attended an Ivy League school. I felt nauseatingly naive for not having considered how wealth and privilege would play into my application process.

At a party one night a man asked me where I was from.

“I grew up in West Virginia.”

“Oh, wow,” he said. “My dad told me that his family had a maid who was from Appalachia. Sometimes she would go out back of the house and grab handfuls of clay and start eating it. My grandmother told him not to stare. She said it was an Appalachian thing.”

I let the noise of the party rise up between me and this man and then I turned and went outside for a cigarette.

I had never before felt ashamed of working as a waitress, or even as a stripper. In Iowa though, I dreaded being thought of as “that waitress who thinks she can be a writer” and so I talked to almost no one about my book and the writing world in general.

Still, it was in my face all the time. Downtown Diner was a few blocks from the Workshop. Gaggles of students came in after workshop and stuffed themselves into the booths, sometimes morose to the point of gaudiness and sometimes gleaming with that kind of elation that only comes from having your work praised in a public setting. Either way they wanted beer and fried food.

To say that I was jealous is not quite right. It was more that in comparison my life looked to me like a fun house mirror, some distorted and smeared version of what I thought I’d been heading towards for years. I didn’t begrudge them their excitement. What I begrudged was the certainty they exuded that they would succeed. My own fears crowded my brain like clouds of gnats.

One evening a Workshop student set aside his papers and smiled at me.

“It must be nice to wait tables,” he said. “You don’t have to think. Maybe when I’m done with school I’ll try waiting tables for a while. Seems like a fun experience.”

I turned away and said nothing.

Though I couldn’t talk about writing that year, the truth was, I also couldn’t not write. This one character, Jodi McCarty, kept haunting me, forming sentences about herself in my head as I carried plates of potatoes and eggs. After work I would walk to a study room at the public library, close the door and slip into my novel.

Jodi McCarty took over my brain and it was exhilarating. This was the part of writing that had nothing to do with Ivy League degrees and fancy M.F.As. Eventually I would also enroll in a grad program at another small unknown Southern school which I attended long distance, correspondence style. But the best advice my teachers gave me was to keep doing what I was doing, keep riding the writing wave.

In the spring of 2015, after finishing some extra diner shifts, I rented a cheap hotel room. I holed up there for several days and on March 13 at 2:13 a.m. I finished my novel. I went out to the hotel swimming pool, dove under and swam until my lungs ached.

A month later, I reached out for agent advice from a former teacher, Lauren Groff. I feared she might have come to her senses since I had last seen her and realized that it wasn’t cool to help out a struggling waitress/writer who had zero pedigrees. But, two weeks later she told me she had shared the manuscript with her agent. Four days later I got a phone call.

Bill Clegg had read it on his flight to the London Book Fair and called me as soon as he landed. I managed to keep my cool, but when he hung up I fell on the floor in a fit of laughter and tears. I smoked all of my housemate’s cigarettes. I couldn’t sleep. This seemed like just as much of a fun house mirror as everything before.

Bill sent the manuscript to 22 editors. I waited and tried not to think about it. My partner and I had decided to move to my family’s farm in West Virginia and I distracted myself with that. And then, on June 18, 2015, my novel, "Sugar Run," sold to Kathy Pories at Algonquin Books. I cried. I went for a swim in the river. I got wasted on whiskey and PBRs. I vomited. I slept for a long, long time.

As the summer progressed, Iowa City and all the class distinctions there, those gatekeepers and all my insecurities began to fade. In September I took a Greyhound bus to New Hampshire for a fellowship at the MacDowell Colony. On my first night, I entered the dining room and saw a vaguely familiar face. It took me a few minutes before I remembered: soft poached egg and dry english muffin. I had waited on her so many times at Downtown Diner that I knew her regular breakfast better than I knew her name. She was faculty at the Workshop. I took a seat at the other end of the table. I was overwhelmed with insecurity. Somebody was going to find out that I didn’t belong here.

After dinner I called my partner. He asked if she had recognized me. Of course not, I said. I’d just been the hands that brought her eggs. He said that I should tell her. But I felt deeply embarrassed by the fact that instead of having three Harvard degrees, I had an intimate knowledge of her favorite breakfast food. Being a waitress is not something to be embarrassed of, my partner said. I knew he was right but still I worried that all the gatekeepers of the world would round me up and put me back behind the counter without a book deal.

As the residency progressed I interacted only minimally with the faculty member and almost forgot my fears. I was probably exaggerating all those class distinctions, I told myself. And then one evening I came to dinner late and the only open seat was beside her. I felt a spike of fear but I swallowed it. She was talking about a Skype conversation she’d had that afternoon with her elementary school-aged daughter.

“So, my daughter tells me that they had a ‘what do you want to be when you grow up?’ day at her school. My daughter can’t decide if she wants to be a surgeon or a composer.” She looked around the table, smiling. “But you know what was really surprising to me? Apparently, my daughter said that many of the girls in her class wanted to be waitresses!” She laughed. “And this is a private school, you know. I was so shocked! Waitresses!”