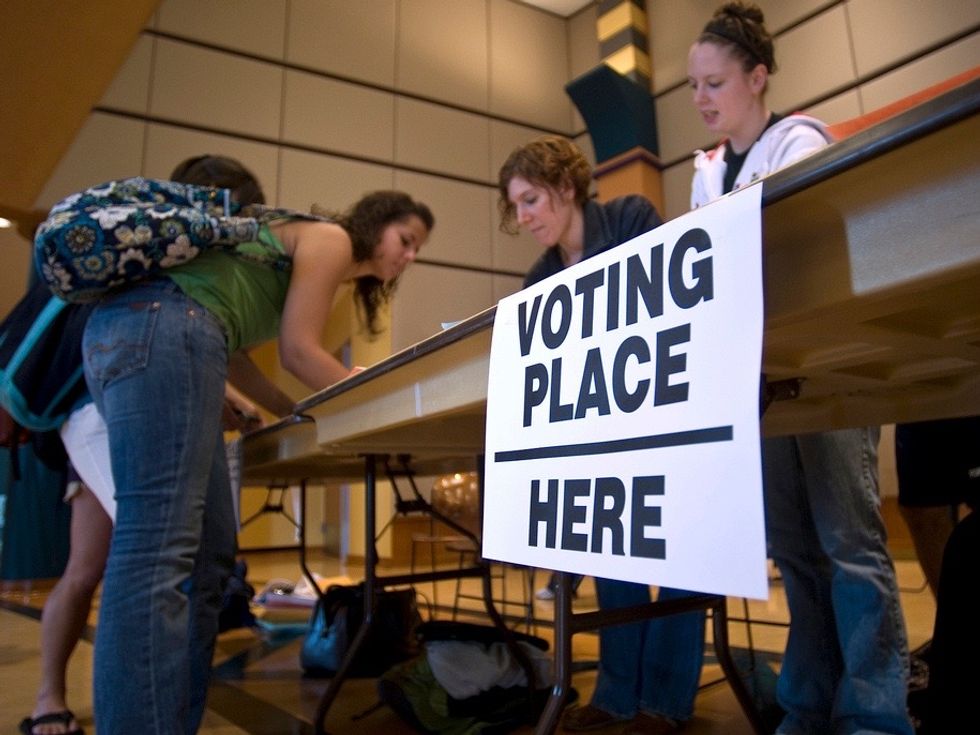 A steady stream of students arrived to vote. Election officials said some were lined up at 6:50 a.m. waiting for the polling place doors to open.
Laura Clawson
and
Daily Kos
October 25, 2019

Republicans are always looking for ways to find people likely to vote for Democrats and keep them from voting, and that’s putting a big voter-suppression target on college campuses, where one poll has found 45% of students to be Democrats and just 24% Republicans. This is where Republican creativity truly flowers—not in the arts or music, but in finding ways to keep students from voting.

Voter ID laws are always fruitful, with state after state passing laws making it anywhere from confusing to completely impossible to use a college ID to vote. That’s the case in Wisconsin and North Carolina and Texas and Tennessee. In New Hampshire, legislators jumped over that and required out-of-state college students to get New Hampshire drivers licenses and auto registrations, effectively a poll tax. This stuff can make a big difference, reports The New York Times: “Nationwide, student turnout in the 2016 presidential election exceeded that of the 2012 presidential vote — but according to the Tufts institute, it fell sharply in Wisconsin, where the state’s voter ID law first applied to students that year.” Donald Trump prevailed in Wisconsin by fewer than 23,000 votes, and there are more than 170,000 students in just the University of Wisconsin system.

In Texas, in case a punitive voter ID law wasn’t enough, Republicans passed a law against polling places that are only open for part of the state’s 12-day early-voting period. That affects a significant number of college campus polling places. Florida Republicans, too, took aim at early-voting places on college campuses, and when their first effort was struck down by the courts, they found a backdoor way to revive it.

Students can also run into trouble knowing at what address to register to vote, with some campuses spread across multiple precincts and elections officials not always sympathetic to helping them figure it out.

Wouldn’t it be nice if Tom Steyer was investing the tens of millions of dollars he’s currently spending on ads for his own presidential campaign in helping make sure students are able to vote?