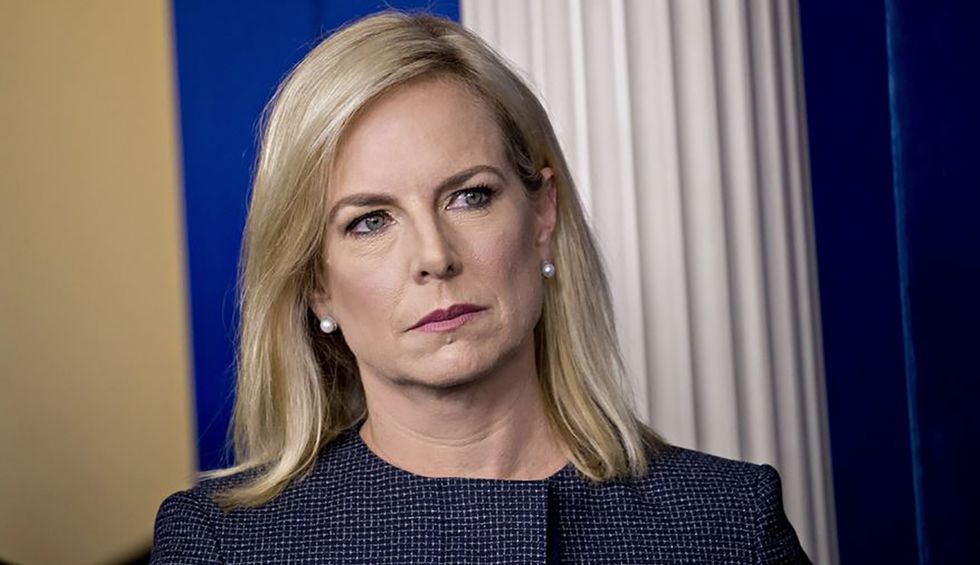 Organizers of Fortune magazine’s Most Powerful Women Summit, taking place in Washington, D.C., on Tuesday, refused to drop former Department of Homeland Security Secretary Kirstjen Nielsen from their event, but activists were still determined to hold them accountable for giving a platform to a disgraced former official who helped implement a crime against humanity at the U.S. southern border.

In a tweet from the organization CREDO Mobile, a billboard truck emblazoned with Nielsen’s image is seen circling around the event’s location at the Mandarin Oriental hotel, along with an undeniable message: “Powerful women don't put kids in cages. Fortune: Stop normalizing hate.” Protestors also stood outside the venue holding signs that read, “Hate is not normal” and “Rehabilitation in progress.”

According to a press release from CREDO Mobile, activists also attempted to greet attendees with information about why Nielsen should have had no part in this event, and encouraged them to stand in solidarity with immigrant communities attacked under the Trump administration’s inhumane policies. However, “greeters were removed from hotel property by security,” the release continued.

Fortune refused to drop Nielsen from the event’s agenda despite pressure from activists and groups including CREDO, Define American, Bend the Arc, and Families Belong Together; high-profile cancellations from former Secretary of State Hillary Clinton, filmmaker and activist dream hampton, and performer Brandi Carlile; and more than 53,000 petition signatures.

“The atrocity of family separation at our Southern border needs to go down in history as one of the United States of America’s most merciless acts,” Carlile said in her statement this week about dropping out of the event. “Respectfully, I absolutely cannot support Kirstjen Nielsen having a voice among the most powerful and inspiring women in America. Her access to power is righteously over.”

The campaign Sleeping Giants said that Fortune CEO Alan Murray liked a tweet that was critical of the cancellations and said the speakers should have instead stayed for a chance to debate Nielsen. But there is no debate to be had over the state-sanctioned kidnapping of children. It’s a humanitarian crisis that continues, with advocates saying that officials have separated more than 1,000 additional families since a federal judge’s 2018 order supposedly stopping separations.

“Kirstjen Nielsen caused an immeasurable amount of trauma to thousands of immigrant families and children separated at the border by her order,” said CREDO Action campaign manager Jelani Drew-Davi. “Fortune did serious harm to its own reputation by inviting her to speak unfettered on their stage and Powerful Women Summit attendees should be outraged that Fortune has made them complicit in Nielsen’s rehabilitation tour.”

“No Trump accomplice should be given a platform to rehabilitate their image and sanitize their cruel history,” Drew-Davi continued. “They should be treated as the toxic waste they are, not elevated as keynote speakers, given star interviews or book deals, or taught to samba.”