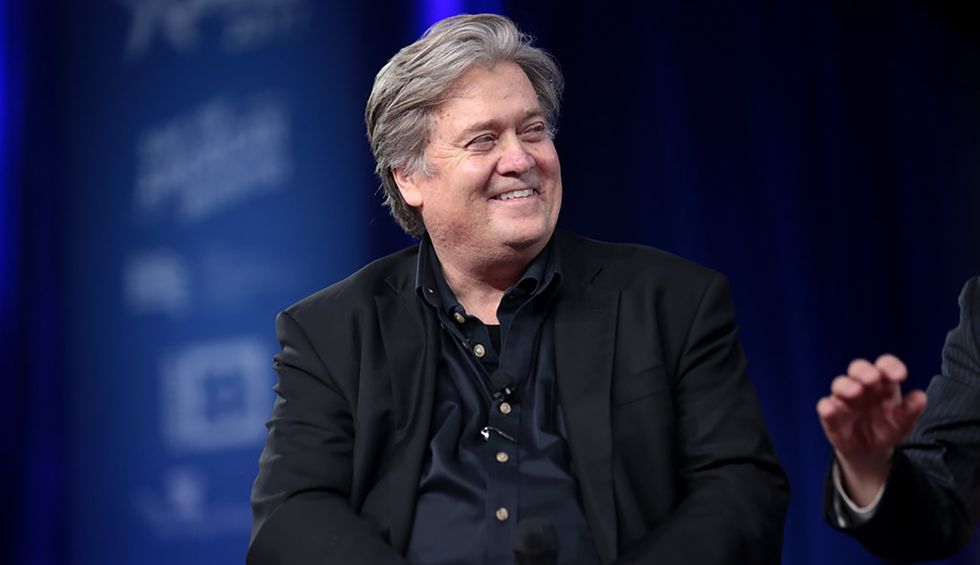 Steve Bannon still strongly supports Donald Trump, wants him in the White House … and very clearly believes he’s an f’ing idiot. Watching the impeachment inquiry, and Trump’s response, from outside Trump’s inner circle, the former White House chief adviser’s started a radio show to defend Trump and desperately try to give the inner circle advice on a more effective defense.

Bannon’s advice? Basically the opposite of what Trump’s been doing. Former Breitbart editor Raheem Kassam, one of Bannon’s co-hosts, says, “There’s a very serious failure to take this whole process seriously from the Republican side.” Their War Room show is about telling Republicans to take it very seriously, starting with the name: Trump has refused to have an impeachment defense war room in the White House.

You can basically go down the list of Trump fall-back positions on defense, and Bannon thinks they’re a bad idea. Don’t say it’s a “witch hunt.” Don’t call the pro-impeachment polls “fake news.” Don’t try to slam everyone who testifies against Trump. And FFS, “We can’t do the Rudy thing anymore.”

The first three strategies—“witch hunt,” “fake news,” and smearing everyone who testifies—lead Republicans to think impeachment will never amount to anything, and get complacent, Bannon and crew argue. And Rudy Giuliani’s muddled rants contribute to a bigger problem, in their view. “Here’s our fundamental problem: We don’t have an elevator pitch to easily describe this to the right,” says Bannon’s other co-host, 2016 Trump campaign communications director Jason Miller.

There is, of course, a more fundamental problem: Trump is guilty of massive abuses of power, obstruction of justice, and more. That may be one of the things making it tough to arrive at an elevator pitch here. Bannon is even possibly smart enough to know that. It just doesn’t matter to him, any more than it matters to any other Republicans.