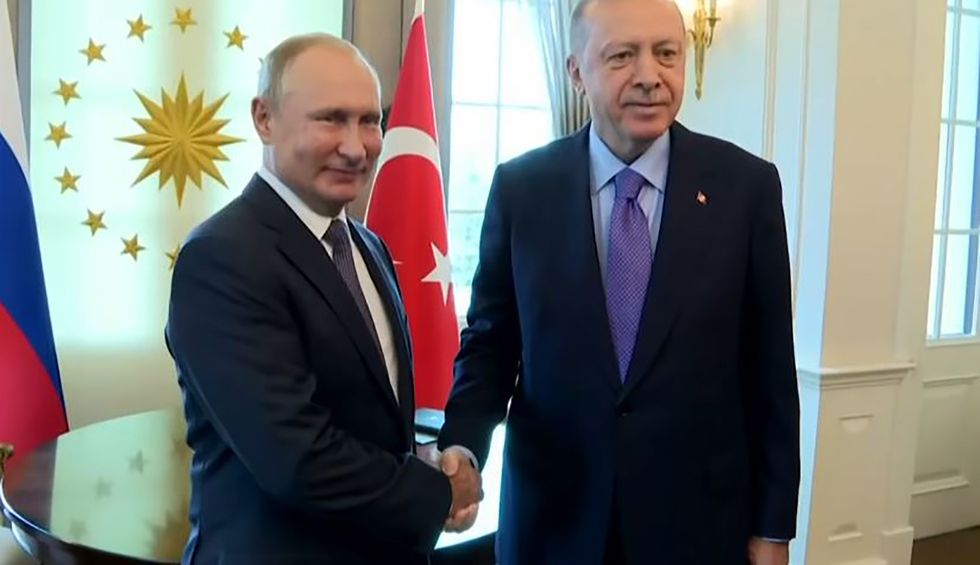 As the White House impeachment inquiry trundles forward, Donald Trump's sellout of Syrian Kurds continues to roil the region. Trump himself is now framing his policy as one of neutrality between the U.S.-allied Kurds and their enemies, even while the United States focuses on guarding and exploiting Syrian oilfields.

"We've secured the oil and, therefore, a small number of US Troops will remain in the area. Where they have the oil. And we're going to be protecting it, and we'll be deciding what we're going to do with it in the future," he told the press on Wednesday.

This follows Sen. Lindsey Graham praising Trump for "thinking outside the box" about Syrian oil, suggesting that displaced Kurds and the United States would operate a "joint venture" to profit from the oil.

In the real world, the situation continues to devolve. Joint Kurdish-U.S. military operations against ISIS have now ended; The New York Times reports both that experts see ISIS as "one of the big winners" from Trump's withdrawal and that "news of the American withdrawal set off jubilation among Islamic State supporters on social media and encrypted chat networks."

Trump's supposed plan to move U.S. troops once stationed in northern Syria to conduct anti-ISIS operations and stabilize the Turkish-Syrian border by moving them to Iraq also looks to be non-operational, after the Iraqi government made a statement denying permission for those forces to remain in Iraq for longer than four weeks. Back in Syria, Russian military police have now begun patrolling Kurdish regions abandoned by those U.S. forces.

While Trump declares an end to "endless wars," the United States continues to have about 200,000 troops deployed overseas, including in South Korea, Afghanistan, and Iraq. Trump has long chafed at the large U.S. presence in South Korea. It is not out of the question that Trump could order a similar full retreat in that nation, expanding on his efforts to gain favor with North Korean dictator Kim Jong Un by reducing joint U.S.-South Korean military exercises designed to maintain force readiness if North Korea were to mount new attacks.

In Syria, however, the damage is already done.

Anti-ISIS efforts have ended, militant prisoners have been freed, and the terrorist group is poised for new gains. Trump's inexplicable plan to guard Syrian oilfields with approximately 200 remaining soldiers so that they can be exploited in a "joint venture" with betrayed Kurds is opposed, of course, both by the Syrian government and by the supportive Russia. And Trump himself seems to be drifting farther and farther from both coherence and reality in each of his new "decisions."