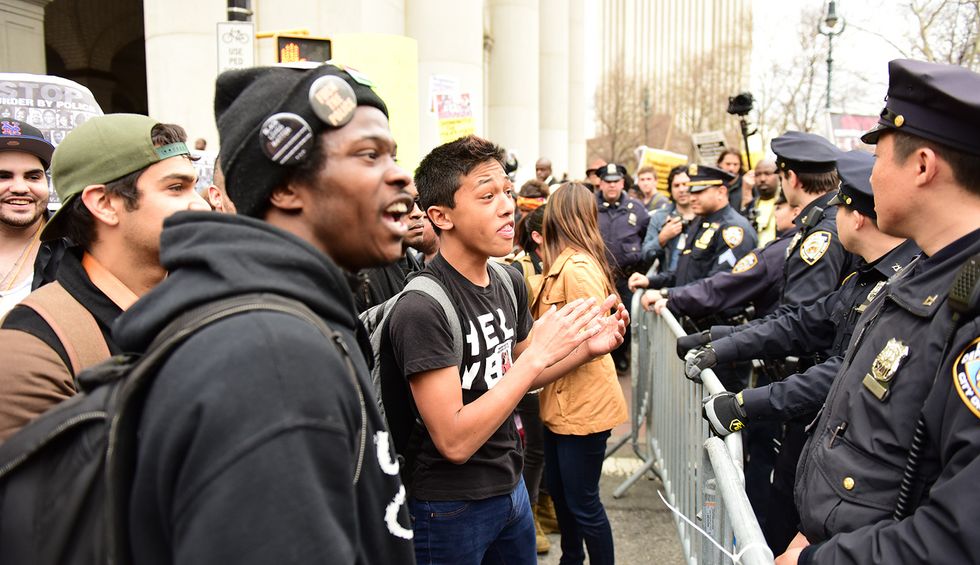 The current struggle for the political soul of America turns on the stories we tell ourselves about our own history.  President Trump has spun a tale of contagious fear, inviting attacks on our imagined enemies.  When we have allowed ourselves to be governed by fear in the past, it has legitimized assaults on Catholics, race riots, and mass incarcerations.

But Americans worried about physical safety and uncertain about their political future have been known to exercise remarkable constraint in a poisonous political environment.  This was the case most notably in the early days of the American Revolution.  It’s not that violence had no attraction for the revolutionaries.  Anxiety generated plenty of anger and hate.  But they did not surrender to their worst instincts.  They upheld the rule of law and decided that patriotism could best be expressed by preserving the fundamental principles of habeas corpus and due process.

During the fall of 1776 revolutionaries in the state of New York faced an existential crisis.  British forces threatened communities on the Hudson River from two directions: the recently conquered New York City in the south and the far north.  Members of an emergency revolutionary committee decided they had to do something to control the large numbers of people in the Hudson Valley who either claimed neutrality or actively supported the British.

The danger was extreme.  Violence stalked every farmstead.  The state legislature had given committees charged with enforcing allegiance to the cause extraordinary power “to defeat the barbarous machinations of their domestic, as well as external enemies.”  The committees were authorized to do whatever they deemed “necessary for suppressing insurrections; to apprehend, secure or remove such persons whom they shall judge dangerous to the safety of the State.”

In New York, the revolutionary committees gathered the names of suspects—some genuine British agents, others farmers who worried that open political commitment to the American cause would expose them to retaliation and a few Quakers.  Authorities compiled lists of “notoriously disaffected persons,” while the revolutionaries urged “every virtuous citizen” to help expose their dangerous neighbors.

The campaign sparked many arrests—so many, in fact, that the local jails were soon filled to capacity.  Desperate to secure the region from possible enemies and eager to focus their attentions on the British, the committees decided to send some two hundred suspects to Exeter, New Hampshire.  The revolutionary government of New Hampshire agreed to take the prisoners, and even though these men had not been formally processed—there were no records of why the names of specific individuals appeared on the New York lists—they were dispatched on a journey to what was in fact an internment camp.  The plan exposed the prisoners to attack.  “We were told that the people of Exeter would deal with us according to our deserts,” one man noted, “by close confinement, if not by hanging.”

Some two hundred New Yorkers were forced to walk to New Hampshire.  Those thought to be most dangerous were housed in a jail, while others had to find their own lodging in nearby villages.  The Quakers were allowed to live with any Quaker families who would agree to take them in.

New Hampshire authorities resolved that “none of the Prisoners sent into this State from the State of New York have leave to write or send Letters to any person or persons whatever or wherever with the same being inspected.”  The suspects were prohibited from having political conversations with local residents. They could not use “words or arguments to people they may converse with tending to hurt the Interests of the States of America, or in opposition to the present contest with Great Britain.”

These rules failed utterly to silence the prisoners most of whom thought they had been incarcerated for no clear reason.  When they asked local committee members to justify their arrest, the New Hampshire authorities weakly explained that they had no answers. No one in New York had submitted the proper documentation.

In conversations in kitchens and on village streets, the prisoners complained that they had been denied the basic legal rights that every American took for granted.  They had not received due process.  No one in New York had bothered with habeas corpus, a right assumed by all British subjects that protected them from unlawful arrest.  The people of New Hampshire listened to these complaints.

“Great uneasiness prevails among them & their clamors of being sent here without an examination at home,” a revolutionary committee in New Hampshire reported, “and conscious of their innocence which they assert, has had considerable influence among the People in these parts in their behalf.”  New Hampshire authorities begged New York for help. “We wish an Impartial Enquiry might be made into their characters,” they wrote, “and if any appear innocent who was taken up and sent from their homes in Confusion and unavoidable hurry that you was involved in at that time, that an order may be sent for their discharge.”

Sensing that they had found a sympathetic audience, the prisoners did what so many other prisoners have done in similar situations. They submitted petitions for their immediate release.  Soon the New Hampshire legislature received a flood of petitions.  Again, the Exeter authorities urged the New York committee to provide instructions: “We earnestly desire some further direction relative to them, and if you think fit for them to be longer detained that you would send some particular charge of their crimes.”

By March 1777 the entire internment camp had collapsed.  The military crisis in the Hudson Valley seemed less pressing, and New York ordered the return of the remaining prisoners. Many had already escaped.  Most seem to have been reabsorbed into society. The great fear that had disrupted the lives of so many people was soon no more than a minor footnote in the history of American independence.

For us, the point is not that desperate authorities in New York ignored the rule of law when they succumbed to fear, always a corrosive force in civil society.  They were not alone in doing so.  Other revolutionaries allowed fear to justify violence against Native Americans and African American slaves.  But these events should not cause us to loose sight of another story, one of restraint and compassion.

Ordinary men and women of Exeter made moral choices. Under extremely trying circumstances these citizens listened sympathetically to their political prisoners who appealed for justice when the success of the revolution hung in the balance. They established a standard for patriotic behavior that is as relevant today as it was in 1776.  To do less—to turn our backs on caged children or remain silent when confronted by attacks on minorities—represents a denial of our own revolutionary heritage.

T.H. Breen is the author of “The Will of the People: The Revolutionary Birth of America” (2019).