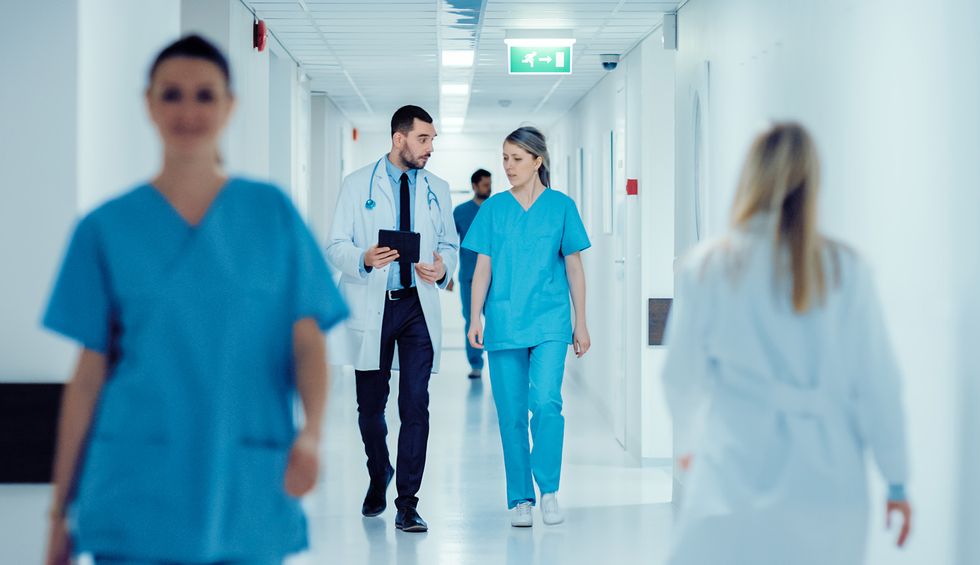 The Institute for Policy Studies on Thursday shared the results of extensive research into how the $750 billion U.S. military budget could be significantly slashed, freeing up annual funding to cover the cost of Medicare for All—calling into question the notion that the program needs to create any tax burden whatsoever for working families.

Lindsay Koshgarian, director of the National Priorities Project at the Institute for Policy Studies (IPS), took aim in a New York Times op-ed at a "chorus of scolds" from both sides of the aisle who say that raising middle class taxes is the only way to pay for Medicare for All. The pervasive claim was a primary focus of Tuesday night's debate, while Medicare for All proponents Sens. Bernie Sanders (I-Vt.) and Elizabeth Warren (D-Mass.) attempted to focus on the dire need for a universal healthcare program.

At the Democratic presidential primary debate on CNN Tuesday night, Sen. Elizabeth Warren (D-Mass.) was criticized by some opponents for saying that "costs will go down for hardworking, middle-class families" under Medicare for All, without using the word "taxes." Sen. Bernie Sanders (I-Vt.), on the other hand, clearly stated that taxes may go up for some middle class families but pointed out that the increase would be more than offset by the fact that they'll no longer have to pay monthly premiums, deductibles, and other medical costs.

"All these ambitious policies of course will come with a hefty price tag," wrote Koshgarian. "Proposals to fund Medicare for All have focused on raising taxes. But what if we could imagine another way entirely?"

"Over 18 years, the United States has spent $4.9 trillion on wars, with only more intractable violence in the Middle East and beyond to show for it," she added. "That's nearly the $300 billion per year over the current system that is estimated to cover Medicare for All (though estimates vary)."

"While we can't un-spend that $4.9 trillion," Koshgarian continued, "imagine if we could make different choices for the next 20 years."

Koshgarian outlined a multitude of areas in which the U.S. government could shift more than $300 billion per year, currently used for military spending, to pay for a government-run healthcare program. Closing just half of U.S. military bases, for example, would immediately free up $90 billion.

"What are we doing with that base in Aruba, anyway?" Koshgarian asked.

Other areas where IPS identified savings include:

"This item takes us well past our goal of saving $300 billion," Koshgarian wrote of the last item.

As Koshgarian published her op-ed in the Times, progressive think tank Data for Progress released its own report showing that a majority of Americans support a "progressive foreign policy" far less focused on decades-long on-the-ground wars, establishing military bases around the world, drone strikes, and arms sales.

"The public rejects the predominant, fear-based framing and policies; instead, they want to see a revamped, demilitarized American foreign policy focused on international cooperation, human rights, and peacebuilding," wrote Data for Progress.

"Voters want to see U.S. funding go to domestic needs such as healthcare, or to other national security tools like diplomacy, instead of to the Pentagon and more endless war," according to the report.

Polling more than 1,000 ppl with YouGov, Data for Progress found that 73 percent of Democratic primary voters ranked numerous issues—including economic challenges and the climate—as more important to them than national security and military funding.

"There is a clear appetite for progressive reforms to U.S. foreign policy," wrote Data for Progress.

In her op-ed, Koshgarian acknowledged that remaking the U.S. military as a truly "defense-based institution, rather than a war machine and A.T.M. for private contractors, will require major changes."

But, she wrote, "that's no excuse for continuing to spend hundreds of billions in ways that make our world more dangerous and deny us the ability to seriously invest in things like jobs, healthcare, education, and all that makes our lives better."