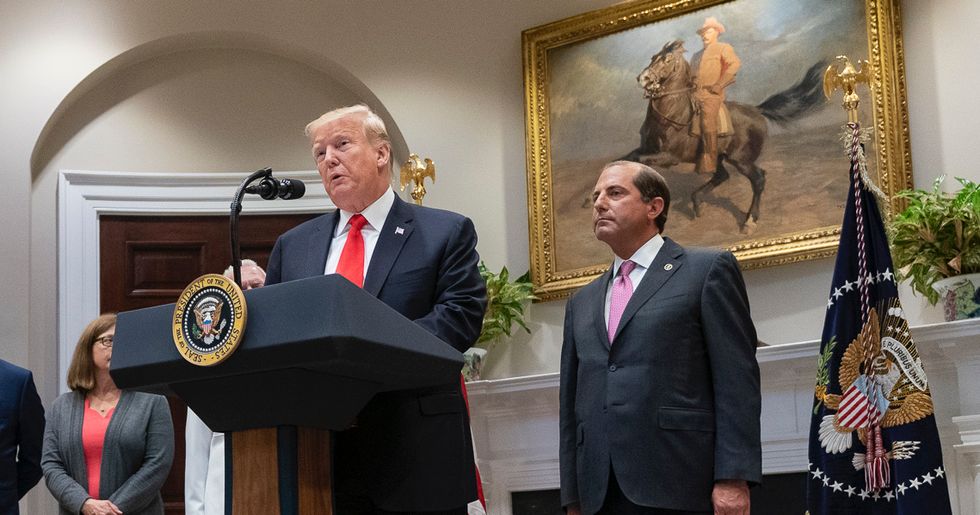 Donald Trump continues to push the ridiculous fiction that he'll have a fabulous health plan that takes care of all the people with pre-existing conditions and that he'll get it done if he's just reelected in 2020. And it's not convincing anyone. Well, except the shrunken base of shrunken-head Republicans.

Drew Altman, president and chief executive officer of the Henry J. Kaiser Family Foundation, previews KFF's newest health tracking poll at Axios. It "will show that most Republicans are sticking with Trump, but few other voters are buying his repeated promises about delivering a 'phenomenal health plan.'" A seriously depressing 81% of Republicans are so deluded that they're "somewhat or very confident" that Trump will deliver on all his promises. That's compared to 95% of Democrats and 61% of independents who exist in reality and say it won't happen.

He's also not winning over converts among seniors when he says he'll protect their Medicare. Only 33% say they trust Republicans, while 49% say they "trust Democrats to do a better job making sure seniors on Medicare are able to get the health care they need."

There's real jeopardy for Republicans here. Because by Election Day 2020, the federal courts may very well strike down the Affordable Care Act, just as the Trump administration has asked them to do. That's going to upend everything, and it won't be in Trump's and the Republicans' favor.