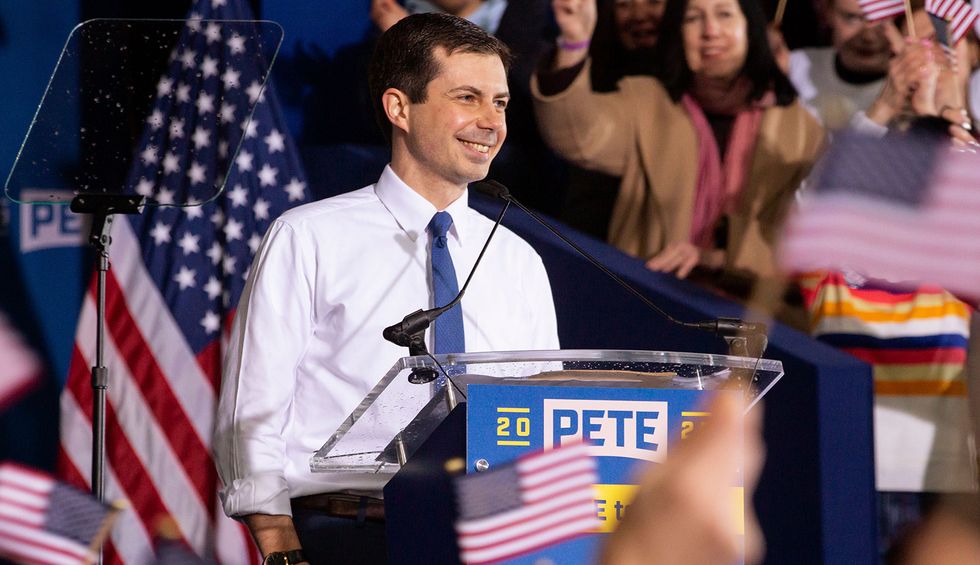 Pete Buttigieg burst on the national scene early this year as a new sort of presidential candidate. But it turns out he’s a very old kind—a glib ally of corporate America posing as an advocate for working people and their families. That has become apparent this fall as Buttigieg escalates his offensive against Medicare for All.

A not-funny thing has happened to Buttigieg on the campaign trail. As he kept collecting big checks from corporate executives and wealthy donors, he went from being “all for” a single-payer Medicare for All system in January to trashing it in the debate last week as a plan that would kick “150 million Americans off of their insurance in four short years.” The demagoguery won praise from corporate media outlets.

Those outlets have often lauded Buttigieg for his fundraising totals this year without scrutiny of the funding sources. They skew toward the wealthy—and toward donors with a vested interest in protecting the status quo.

“Of course, from a voter’s point of view, what really matters is not how much financial support a candidate is getting, but who they’re getting it from—because those supporters may not have the same interests as the voter,” Jim Naureckas at the media watchdog FAIR pointed out this summer. “In the case of Buttigieg, the two main sources of funds seem to be the tech industry . . . and the financial industry, that traditional source of funds for corporate-oriented Democrats.”

So far this year, Buttigieg has reported $27 million in contributions of $200 and above—accounting for 52.5 percent of his total dollars raised. Compare that to Elizabeth Warren at 29.6 percent and Bernie Sanders at 24.9 percent.

And major sources of Buttigieg’s funding are in harmony with his recent hostility toward Medicare for All. “Pharmaceutical, health insurance, and hospital industry donors have flocked to Mayor Pete all year,” journalist Alex Kotch reported last week. “As of mid-2019, he was second only to Donald Trump in overall campaign cash from donors in the health sector. Among Democratic candidates, he was second to former Vice President Joe Biden in terms of pharmaceutical and health insurance donations.”

Reporting for the investigative website Sludge, Kotch wrote: “Over 100 individuals in leadership, legal, consulting, or financing roles in health sector donated $200 or more to Pete for America between July and September. These donors include pharmaceutical industry leaders such as the chief corporate affairs officer at drugmaker Pfizer, the president of Astex Pharmaceuticals, a state lobbyist for Biogen, a vice president of public policy at Novartis, and the deputy vice president at the nation’s largest pharmaceutical trade association, PhRMA, as well as attorneys for AbbVie, Johnson & Johnson, and Merck.”

Buttigieg’s reversal of avowed support for Medicare for All is classic opportunism. In early 2018, he was unequivocal via Twitter: “I, Pete Buttigieg, politician, do henceforth and forthwith declare, most affirmatively and indubitably, unto the ages, that I do favor Medicare for All.”

Eight months ago, as The Hill noted, “Buttigieg also appeared to defend single-payer [Medicare for All] health insurance in a February 2019 interview on MSNBC's ‘Morning Joe.’” But now, on its website, the Buttigieg campaign is engaged in a herculean pretzel effort at doubletalk, declaring that his “affordable public plan will incentivize private insurers to compete on price and bring down costs. If private insurers are not able to offer something dramatically better, this public plan will create a natural glide-path to Medicare for All.”

Left unexplained is how Buttigieg is providing any sort of “glide-path” to Medicare for All by now deploying insurance-industry talking points to denounce Medicare for All. Buttigieg is trying to poison the well by conjuring up an effort to precipitously dump people off of health coverage and deprive them of “choice”—deliberately confusing the current “choice” of predatory for-profit insurance plans with the genuine full choice of healthcare providers that enhanced Medicare for everyone would provide.

“The efficiencies of a single-payer system would make universal coverage affordable and give everyone in the United States their free choice of doctors and hospitals,” David Himmelstein and Steffie Woolhandler wrote this month in The Nation. “But that goal will remain out of reach if private insurers are allowed to continue gaming the system.”

Himmelstein and Woolhandler, who are professors of public health and cofounders of Physicians for a National Health Program, assessed the healthcare scenarios being touted by the two most prominent candidates now attacking Warren and Sanders: “Some proposals, including those by Joe Biden and Pete Buttigieg, would offer a Medicare-like public plan for sale alongside private plans on the insurance exchanges now available under the Affordable Care Act. These buy-in reforms would minimize the need for new taxes, since most enrollees would be charged premiums. But tens of millions would remain uninsured or with coverage so skimpy, they still couldn’t afford care.”

Buttigieg is not the only Democratic presidential candidate who has switched positions on supporting Medicare for All, or is just generally using the public and political confusion around the issue to undermine real efforts to move to a universal system. Kamala Harris, who co-sponsored Bernie Sanders’ Senate bill, has consistently waffled, and has settled on a plan that continues to let private insurers play a role. But Buttigieg is the only candidate who is now making opposition to the Sanders- and Warren-backed Medicare for All a central focus of his campaign.

With the mutual alignment of Buttigieg and his corporate healthcare-industry donors, Mayor Pete’s approach seems to be a case of a flimflamming candidate who poses as a forthright leader. For the general public, instead of “Mayor Pete,” a more apt nickname might be “Mayor Elite.”

As for Buttigieg’s slippery slogan of “Medicare for all who want it,” Rep. Ro Khanna pointed out that such a setup “won't bring the administrative costs down of private insurers or maximize negotiation with Big Pharma and hospitals.” And: “This means higher premiums, higher drug costs, higher deductibles, and more denied claims for the middle class.”

Yet Buttigieg has joined with Joe Biden to open up a well-funded, double-barreled assault on Medicare for All.

“I am tired of seeing Democrats defend a dysfunctional healthcare system where 87 million people are uninsured or underinsured and 30,000 people die every year because they lack adequate coverage,” Bernie Sanders wrote last Friday in an email to supporters. “So I was disappointed this week to see that Joe Biden used the talking points of the health insurance industry to attack Medicare for All and our campaign.”

While Buttigieg is not strong in national polls right now, he’s polling notably well in Iowa, where the first voting for the Democratic presidential nomination will occur in early-February caucuses. And with $23.4 million in the bank, he’s got much more money in hand than Biden ($9 million). The only rivals with more money than Buttigieg are the two he’s assailing for their resolute support of Medicare for All—Sanders ($33.7 million) and Warren ($25.7 million).

While I personally support Sanders, I’m equally appalled by Buttigieg’s attacks on Warren. As part of a campaign strategy that aims to undermine both of his progressive opponents, the mayor continues to falsely characterize Medicare for All—no matter how much confusion and disinformation he creates along the way.

Whether or not Pete Buttigieg can win the nomination, he has certainly emerged as a sharp corporate tool.