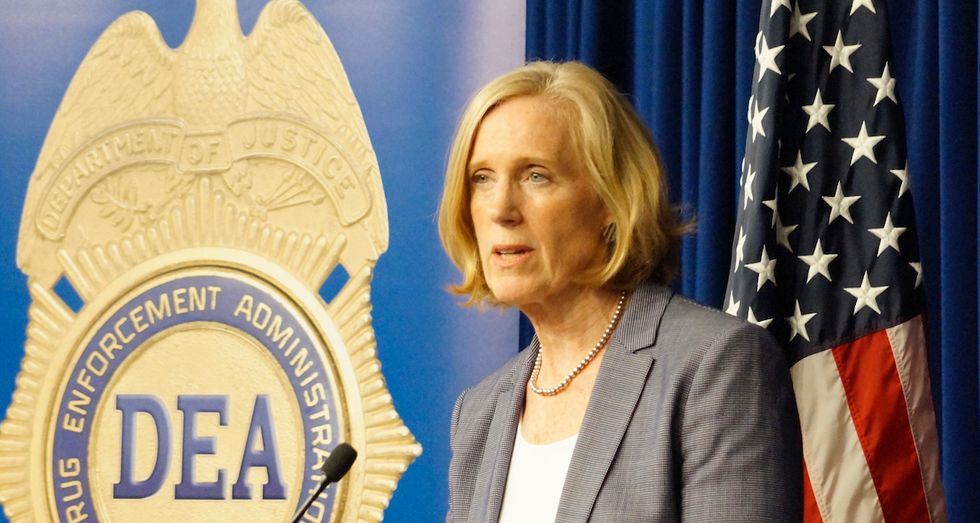 Photo of Bridget Brennan via the Office of the Special Narcotics Prosecutor for the City of New York.
Filter
October 01, 2019

In a recent article in the New York Daily News, prosecutors from all over the Empire State gripe about reforms in the state making their jobs more difficult.

The changes that so concern them include a new “discovery” law to compel prosecutors to reveal the evidence they hold to defenders in advance of a criminal trial, allowing the defense to prepare properly—which merely brings the New York system into line with that bastion of civil rights, Texas—as well as reforms to the bail system.

New York’s new bail law means judges are required to release people who are charged with misdemeanors, or certain felonies.

Bridget Brennan is quoted as opposing this change. “There are some homicide offenses where [now] you can’t even ask for bail,” she complains to the Daily News. “Criminally negligent homicide is not bail qualified. Certain robbery charges are not, as well as certain burglary charges.”

Brennan has previously been criticized for using her role to fearmonger—allegations she denied in salty fashion.

Except the platform that allows her to be quoted in such noble causes isn’t even the role of a district attorney. Instead, she is a glorified special assistant district attorney, who doesn’t even go near homicide cases, let alone robberies.

An office that only exists due to the pugilistic, blinkered thinking of a bygone era.

Brennan is the chief of the Office of the Special Narcotics Prosecutor for the City of New York⁠—an office that only exists due to the pugilistic, blinkered thinking of a bygone era. Nothing like it exists anywhere else in the country.

Former Governor Nelson Rockefeller⁠—who lent his name to the vastly damaging and racist so-called  “toughest drug law in the nation”⁠—created the role now occupied by Brennan as a part of an “emergency narcotics plan” in 1971. That was the same year he proclaimed that “drug addiction represents a threat akin to war in its capacity to kill, enslave, and imperil the nation’s future.”

The Special Narcotics Prosecutor exclusively handles large-scale drug cases, in collaboration with other state and federal agencies that would otherwise do this.

The question of who heads the office is determined by a unique joint decision of New York City’s five district attorneys, who represent the five city boroughs. These decisions rarely get made. Incumbents seem to be able to hold onto the job for as long as they like, and there have been only four Special Narcotics Prosecutors over the last 40 years. More often than not, changes are triggered by the incumbent Special Narcotics Prosecutor leaving for a more attractive job, such as federal judicial service or city commissioner.

When Bridget Brennan was appointed in 1998, the DAs’ offices were led by people who are now deceased, but live on as the stuff of “tough-on-crime” legend. Charlie Hynes was still the Brooklyn DA, and Robert Morgenthau was the Manhattan DA. Richard A. Brown, the Queens DA, was still holding changes to the draconian Rockefeller drug laws at bay. (Brown’s resistance to fairer drug sentencing laws was finally defeated in 2001.)

The reforms that some of the current occupants of these five DA seats stand for would have been deemed outrageous by their predecessors. Hynes and Morgenthau both failed to support recreational marijuana decriminalization, though the latter was comfortable with medical marijuana. They have been replaced by DAs Eric Gonzalez and Cy Vance, who both support the legal creation of safe consumption sites (SCS) for people who use opioids like heroin and fentanyl.

Brennan herself has said that the SCS intervention “over-emphasizes harm reduction at the expense of public safety.”

As if that were not enough, Brennan wants even more money for these “public education” efforts.

Brennan’s office borrows assistant prosecutors from the five DAs, and Brennan herself is its sole full-time employee. Even so, her office gets nearly a million dollars a year to do things like testify in front of the Congress that China and Mexico are to blame for the overdose crisis.

Brennan also has spent her office’s money on a scare video about fentanyl that spread unscientific myths about overdosing via airborne fentanyl. When asked to justify it, she expressed frustration that the city Health Department was focusing its public education on naloxone, which she called “a Band-Aid.”

As if that were not enough, Brennan wants even more money for these “public education” efforts—despite her office already getting many more millions through DOJ asset forfeiture sharing (money that she misused, according to a federal audit).

Despite not being an elected official, Brennan ingratiates herself to influential institutions as well as any successful politician. In a recent blurb at her law school alma mater’s website, she talks up how, as a Manhattan line prosecutor, she helped pave the way for charging police with negligent homicide after people die in their custody. A decade prior, University of Wisconsin School of Law brought her in as a Convocation Speaker for new law graduates in 2004.

Brennan’s office touts its uniqueness. But in criminal law, singularity can often be a sign that something is wrong. For example, Oregonians might well be embarrassed that theirs is the last state to keep unanimous felony jury verdicts⁠—which were enacted to help ensure that jurors of color could not thwart racially-motivated prosecutions⁠—being beat out by Louisiana in the race to end the practice.

Perhaps no one and nothing else in New York City better represents the worst history of the War on Drugs than Bridget Brennan and the Office of the Special Narcotics Prosecutor.

In a city where conversations around sweeping criminal justice reform are revving up at unprecedented speeds, the selection process of the Special Narcotics Prosecutor—but also the very existence of the unwelcome relic that is her role—should be up for urgent debate.