Nobel Laureate Paul Krugman: Trump is 'unusually blatant and gaudily corrupt' ⁠— but he 'isn’t an aberration' in the Republican Party 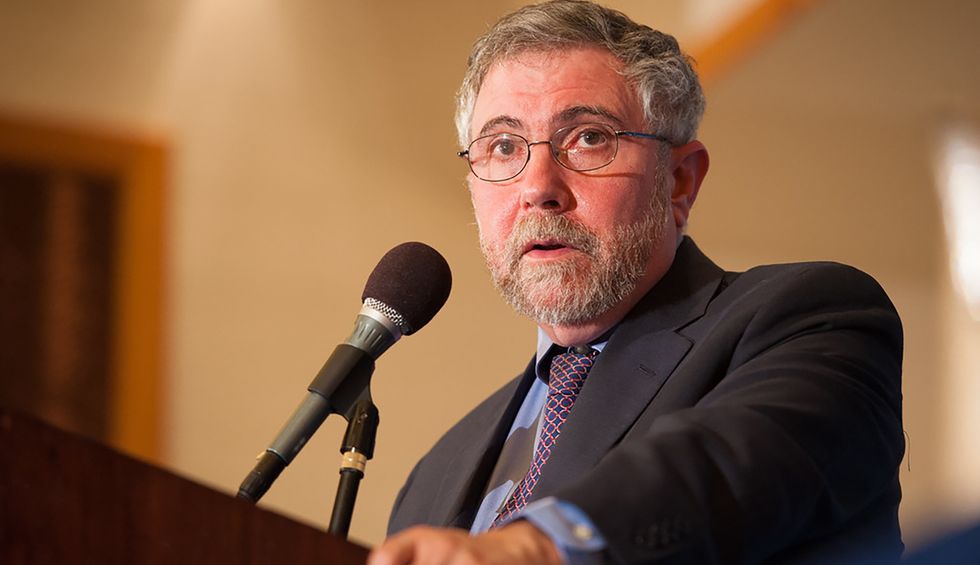 After Democrats lost all three presidential elections in the 1980s, much of the Democratic Party leadership decided that centrism rather than liberalism was the way to go — and there are still plenty of Democrats who liberal economist and veteran New York Times columnist Paul Krugman considers “fanatical centrists.” But with the Ukraine scandal, Krugman asserts in his October 7 column, even the “fanatical centrists” in the Democratic Party are being forced to acknowledge that today’s GOP is a party of extremists who don’t respect “democratic norms.”

“My sense, although it’s impossible to quantify, is that the events of the past several weeks have finally broken through the wall of centrist denial,” Krugman writes.

Those events include House Speaker Nancy Pelosi finally coming out in favor of an impeachment inquiry against President Donald Trump after learning that during a July 25 phone conservation, Trump tried to pressure Ukrainian President Volodymyr Zelensky into investigating former Vice President Joe Biden and his son Hunter Biden.

Centrist Democrats like Joe Biden, Krugman writes, were typical of “people who may have been willing to concede that Trump was a bad guy, but otherwise maintained — in the teeth of the evidence — that our two major parties were basically equivalent: each party had its extremists, but each also had its moderates. And everything would be fine if these moderates could work together.”

But with most Republicans adamantly rallying around Trump despite the Ukraine scandal, Krugman observes, “fanatical centrists” have a hard time denying that extremists now dominate the GOP.

“Things that previously were merely obvious have become undeniable,” Krugman stresses. “Yes, Trump has invited foreign powers to intervene in U.S. politics on his behalf; he’s even done it on camera. Yes, he has claimed that his domestic political opponents are committing treason by exercising their constitutional rights of oversight, and he is clearly itching to use the justice system to criminalize criticism.”

Krugman himself has never claimed to be a centrist. One of the great things about his column is the fact that he is an unapologetic cheerleader for liberalism and skillfully uses political, historic and economic facts to make his case. And the 66-year-old Krugman recalls that even back in 2003, he was arguing that “today’s Republican Party is a radical force increasingly opposed to democracy.”

“For a long time, however, making that case — pointing out that Republicans were sounding ever more authoritarian and violating more and more democratic norms — got you dismissed as shrill, if not deranged,” Krugman explains. But extremism, Krugman adds, was a feature of the Republican Party long before Trump ran for president.

“It’s important to understand that the GOP hasn’t suddenly changed, that Trump hasn’t somehow managed to corrupt a party that was basically OK until he came along,” Krugman emphasizes. “Anyone startled by Republican embrace of wild conspiracy theories about the deep state must have slept through the Clinton years and wasn’t paying attention when most of the GOP decided that climate change was a hoax perpetrated by a vast global scientific cabal.”

Krugman concludes his column on a somber note, stressing that Trumpism isn’t merely an indictment of Donald Trump, but of the Republican Party in general.

“Trump isn’t an aberration,” Krugman asserts. “He’s unusually blatant and gaudily corrupt, but at a basic level, he’s the culmination of where his party has been going for decades. And U.S. political life won’t begin to recover until centrists face up to that uncomfortable reality.”