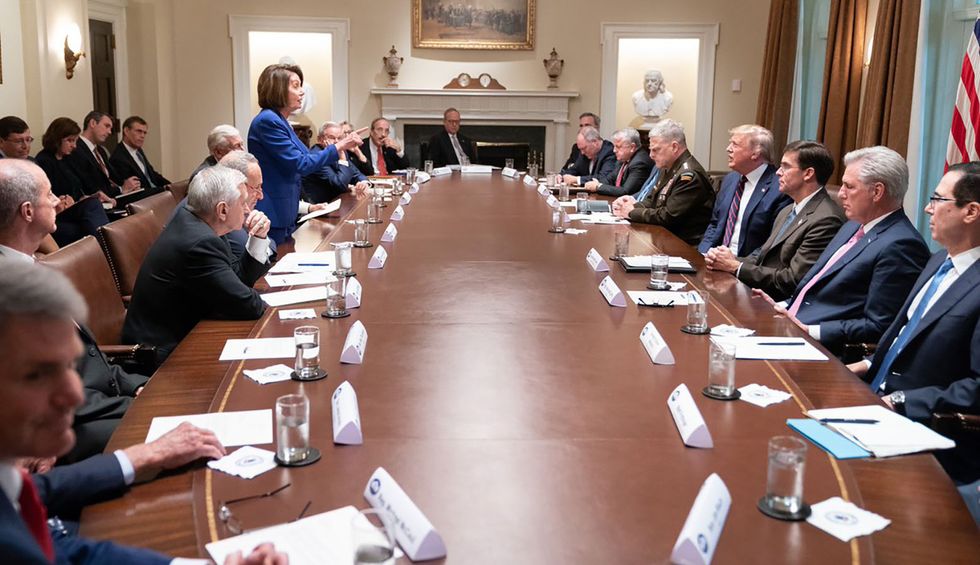 We’ve reached the season where faithful viewers are forced to quit the series. If this were a Tom Clancy novel, it wouldn’t be believable. Day 1,000 of the Trump presidency has jumped the shark.

“I think now we have to pray,” House Speaker Nancy Pelosi told reporters upon returning to Capitol Hill from the White House late Wednesday. Along with other Democratic leaders from Congress, Pelosi had earlier walked out of a White House meeting after what she described as "a very serious meltdown on the part of the president.”

Donald Trump spent much of the first two years of his presidency without facing a major international crisis after his predecessor, Barack Obama, had to deal with one nearly every six months for his both of his terms. Considering all the traditional externalities, Trump was playing president on easy mode. A growing economy topped it off.

While we've seen Trump step on his successes time after time, displacing the attention meant for a carefully planned White House event with ludicrous statements, he has never appeared as unhinged in his words and deeds than he has this month. The events of his 1,000th day go a long way to illustrate the decline.

Wednesday marked the eighth day of heavy fighting between Kurdish and Turkish forces after Trump abruptly announced that U.S. forces would pull out of northern Syria. Each day since then has made clear that whatever stability the U.S. military helped create and sustain in the region is gone. But on Wednesday Trump downplayed the escalating tensions, telling reporters in the Oval Office, "It's not our border," and arguing that Kurdish forces, longtime U.S. allies, are "no angels."

As part of its "deliberate withdrawal," the U.S. military carried out airstrikes on Wednesday to destroy the headquarters for its counter-ISIS campaign after Turkish backed forces closed in on the base.

Trump went on to say his unilateral decision was "strategically brilliant," but his former ISIS adviser, veteran national security official Brett McGurk, quickly took to Twitter to say that “Trump has no idea what’s happening.”

Both Vice President Mike Pence and Secretary of State Mike Pompeo traveled to Ankara overnight to meet with Turkish President Recep Tayyip Erdogan. A top concern is that 50 nuclear bombs are stored in a U.S.-manned air force base in Turkey with no guarantees from Erdogan.

So this latest Trump tantrum looks to be the beginning of an active cover-up of whatever he allows to happen in Syria. The White House is trying to prevent Congress from learning what’s going on there, according to Pelosi. She said the White House canceled a classified briefing scheduled for Thursday with House members about “the dangerous situation caused by Mr. Trump’s withdrawal of troops in the region."

“I hate ISIS more than you do,” Trump reportedly told Pelosi., calling her "a third-rate politician." He then shrugged off the fewer than 100 ISIS prisoners who had escaped since his decision, saying they were “the least dangerous” ones.

Trump is lashing out at anyone and everyone, in other words, instead of admitting he made a terrible mistake.

A few hours before Wednesday’s disastrous meeting, the House voted overwhelmingly to rebuke Trump's decision to remove U.S. troops from regions in Syria where they had fought ISIS alongside Kurdish forces. In what is now a slightly more frequent occurrence, Democrats and Republicans banded together in bipartisan approval of a non-binding resolution condemning Trump. All Democrats present voted for it; so did 129 Republicans. As with recent votes on aiding Saudi Arabia and redirecting military funds to his border wall, Trump again finds himself standing against his own party on the record. These are the first real signs of serious GOP splintering.

Pelosi told reporters that Democrats "couldn't continue in the meeting" at the White House on Wednesday because Trump "was just not relating to the reality of it."

Perhaps what startles Trump so much is the reality that he might not have the unquestioned loyalty that he’s always assumed. As that has becomes clear, his behavior has grown increasingly erratic for months. On his 1,000th day, the Speaker of the House said as much.

She held her tongue during Trump’s editing of hurricane maps with Sharpies and his fantastical endeavor to purchase Greenland, but now Pelosi is openly questioning the president's mental fitness. It may be time for some within his administration to sound the alarm.

Of course, White House press secretary Stephanie Grisham made the laughable claim that Trump was "measured, factual and decisive.” The president immediately took to Twitter to prove her wrong, projecting Pelosi's concern about his mental health back on the speaker in a transparent effort to hide his humiliation.