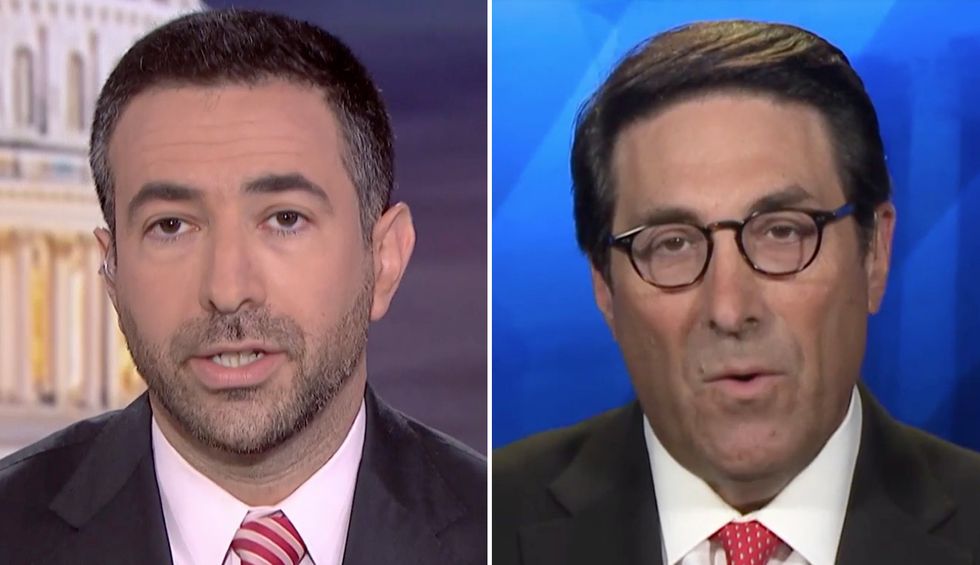 Jay Sekulow, one of Donald Trump’s paid liars attorneys, went on MSNBC with host Ari Melber to discuss how up is down and black is white and everything you see is not what you see. Gaslighting like it was going out of style, Sekulow told Melber that nothing Donald Trump has done is impeachable, and that he didn’t say the things that are in the whistleblower report, or in the carefully created “transcript”—that’s not a transcript—of Trump’s conversation with Ukrainian president Volodymyr Zelensky.

JAY SEKULOW: I don't think it's impeachable. I don't see where it's a high crime or misdemeanor. Tell me what rule, law, or statute has been violated by the president as commander in chief and as the chief executive under Article Two of the constitution violated any rule. You may not like the politics of it. You may not like the statement but where does it violate a law? Where does this rise to the level of a high crime or misdemeanor. I know you'll say get to the whistleblower—

ARI MELBER:--We are going to get to the whistleblower. We are. Because we're not there yet.

SEKULOW: Go ahead. All right.

MELBER: You’re asking about whether there is a statutory violation. As you know, what the founders did was write in the idea that you could have high crimes and misdemeanors. You want to point to statutes, that's not required, but—hold on, and I'll let you respond, sir. It is unlawful to “solicit” or “receive” any foreign help which includes “things of value.” So, if you want a statute, I've got it up on the screen. That's not even required. The other thing I want to ask you—

It’s important to note here that what Sekulow and the Republican party are attempting to do these days is to change the burdens of proof, and the laws put in place, to check the powers of the Executive Branch. As Sen. Lindsey Graham once explained “A president doesn’t even have to be convicted of a crime to be impeached. Impeachment is about restoring honor and integrity to the office.” One of the reasons for that is because the head of the Executive Branch of government, when abusing their power, can hamper how the laws of the land are implemented.

Sekulow begins to try and cut Melber off here to go into a hypothetical tangential argument that will not even remotely acknowledge the facts being made. Melber asks Sekulow that if everything is as Sekulow insists it is, why has Trump et al. acted the way they have, and continue to act that way.

SEKULOW: Do you really, Ari, in all honesty --

MELBER:--I want to ask you and I'll give you time. If Donald Trump didn't do anything wrong in this Ukraine plot why did he deny it and keep shifting the defense?

Sekulow goes into a gaslighting about how Trump never denied it and he released the “transcript” and then it’s the Democratic Party that has shifted everything and covered everything up. Melber shows Sekulow clips of Trump denying it to which Sekulow responds that Trump didn’t deny it. Yes. Even when faced with the video evidence.

Melber then finished off by asking Sekulow to explain how, if Trump and others believe that the “evidence” as they see it exonerates the president, why oh why is the White House stonewalling every attempt at providing the evidence.