Pompeo lashed out at a local Kansas reporter who asked about Trump abandoning Kurdish allies in Syria: ‘The whole predicate of your question is insane’ 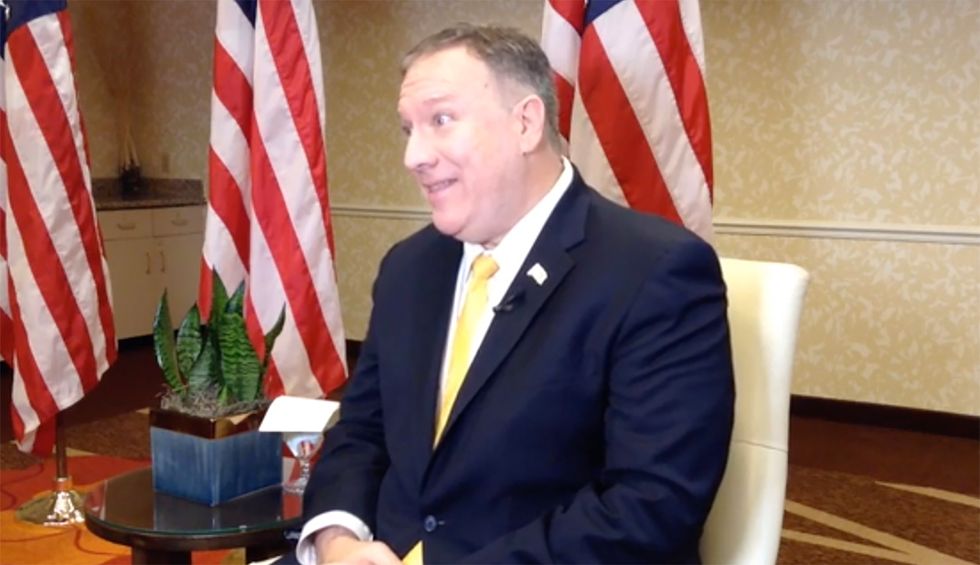 Two members of the Trump Administration, Secretary of State Mike Pompeo and White House Senior Adviser Ivanka Trump, visited Wichita, Kansas this week to speak at a Wichita State University event dealing with employment in the 21st Century. During the visit, the 55-year-old Pompeo was interviewed by the Wichita Eagle — and things grew testy when he was asked about Trump’s widely criticized decision to withdraw U.S. troops from northeastern Syria and abandon the United States’ Kurdish allies.

The Eagle’s Jonathan Shorman wrote up the interview as a Q&A article, and video of the interview was included with it online. In the video, Pompeo is seen answering questions about whether or not he plans to run for the U.S. Senate in Kansas and House Democrat’ impeachment inquiry against President Donald Trump.

Pompeo, during the interview, expressed no interest in running for the U.S. Senate seat that Sen. Pat Roberts will be vacating — although he didn’t really rule out the possibility either. And Pompeo grew defensive when asked about the Ukraine scandal and House Democrats’ impeachment inquiry.

If Pompeo was hoping for softball questions from the Eagle, he didn’t get them. And the secretary of state obviously had no desire to be grilled about Trump’s Syria policy. The Eagle asked, “what good really is the word of the U.S. in light of the president’s treatment of the Kurds? Has that undercut U.S. credibility?”

Pompeo angrily responded, “The whole predicate of your question is insane. The word the United States — I’ll give you a good example — the word of the United States is much more respected today than it was just two and a half years ago. The previous administration in Syria, where you asked the question earlier, the previous administration said, ‘boy, if you use chemical weapons that’s going to be bad.’ And the president drew a red line — President Obama drew a red line. He then duly ignored it.”

Pompeo, who grew up in Southern California, is not a Kansas native but moved to Wichita in 1998. Some GOP strategists are urging Pompeo to run for the U.S. Senate in that state in 2020, as they fear that Tea Party extremist Kris Kobach would lose to a Democratic candidate if he received the nomination.