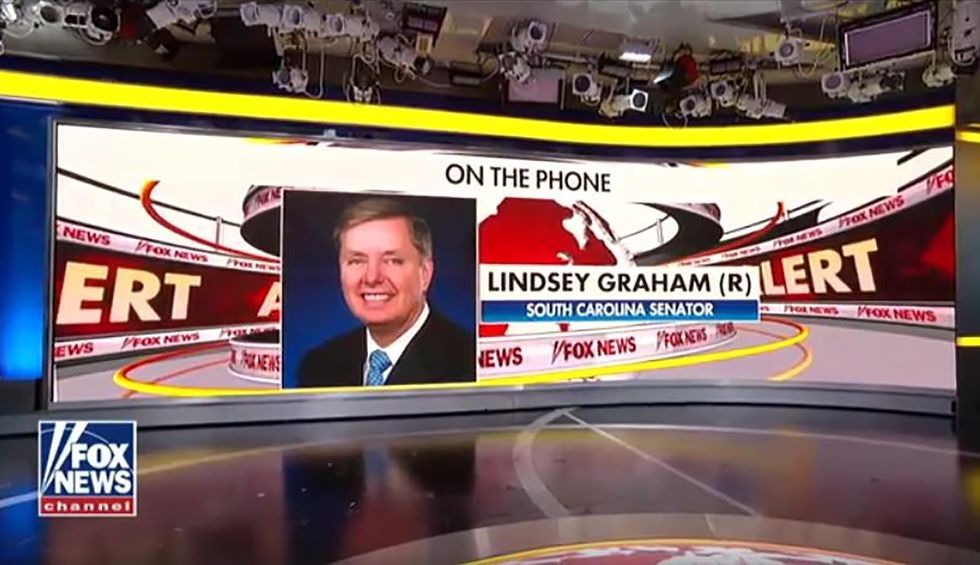 Sen. Lindsey Graham, R-S.C., called in to “Fox & Friends” to rebuke President Donald Trump's decision to withdraw U.S. forces from Syria, marking a rare moment in which one of the commander-in-chief’s most loyal allies pushed back against him on his favorite morning show.

“This impulsive decision by the president has undone all the gains we’ve made — thrown the region into further chaos,” Graham told the cast of “Fox & Friends” during his appearance. “Iran is licking their chops. And if I’m an ISIS fighter, I’ve got a second lease on life. So to those who think ISIS has been defeated, you will soon see.”

“And to Turkey: You’ve destroyed the relationship — what little you had — with the U.S. Congress, and I will do everything I can to sanction Turkey’s military and their economy if they step one foot into Syria,” the Trump ally continued. “I hope I’m making myself clear how shortsighted and irresponsible this decision is, in my view.”

Graham’s views were echoed by Brian Kilmeade, a co-host of “Fox & Friends” who has called out Trump in the past. Earlier in the program, Killed said that the president's withdrawal from Syria constituted a betrayal of the Kurds, who had allied themselves with the U.S. government.

“The reason why our casualties were so low is because the Kurds did all the fighting,” Kilmeade said. “Now we’re saying, ‘OK, Turks, go wipe them out or force them out.’ What kind of message is that to the next ally that wants to side with us?”

Brian Kilmeade fights with his co-hosts over Trump throwing Syrian Kurds under the bus: "What kind of message is th… https://t.co/fN0vmzyz0p
— Bobby Lewis (@Bobby Lewis) 1570448259.0

After asking the president to rethink his decision, co-host Steve Doocy said that the president was fulfilling his campaign promise to end wars — and force other countries to take care of their own affairs.

“Again, we’re abandoning our most loyal allies. Who did all our fighting?" Kilmeade asked in apparent disbelief. "All we did is arm them, and they did all the work. And now we say, 'Good luck. Good luck surviving.'"

“It looks like that’s the tactic that the White House and the president is going to take,” Doocy replied to his co-host.

This is not the first time that Graham has criticized Trump on foreign policy. Last year, the senator tweeted that “it is not in our national security interests to look the other way when it comes to the brutal murder" of former Washington Post journalist Jamal Khashoggi. He added at the time that “while Saudi Arabia is a strategic ally, the behavior of the Crown Prince – in multiple ways – has shown disrespect for the relationship and made him, in my view, beyond toxic.”

Trump tweeted a defense of his decision to pull out of Syria later on Monday morning. Although it is unclear if he was directly responding to Graham and “Fox & Friends," the president is widely known to be a fan of the morning show. In his tweets, the president wrote that “if Turkey does anything that I, in my great and unmatched wisdom, consider to be off limits, I will totally destroy and obliterate the Economy of Turkey (I’ve done before!).”

After adding that Turkey and Europe must guard the captured ISIS fighters and their families, Trump wrote that “the U.S. has done far more than anyone could have ever expected, including the capture of 100% of the ISIS Caliphate. It is time now for others in the region, some of great wealth, to protect their own territory.”

On Sunday, Trump announced through press secretary Stephanie Grisham to the Washington Post that Turkish President Recep Tayyip Erdoğan would “soon be moving forward” with plans to send troops to fight the Kurds as the U.S. pulled out of the region. Known as the Syrian Democratic Forces, the Kurdish fighters who fought against the Islamic State with the U.S., criticized Trump’s decision in a statement saying, “The United States forces have not fulfilled their obligations and withdrew their forces from the border area with Turkey.”

Elsewhere in conservative media, Meghan McCain changed the hot topic of discussion on “The View” to mount a rebuke of the Trump administration officials and members of the Republican Party who have remained silent in the wake of the president’s decision, calling them “feckless, unpatriotic cowards.”

You can watch Graham's appearance on "Fox & Friends" here: