'Joker' is holding up a mirror to our disillusioned times 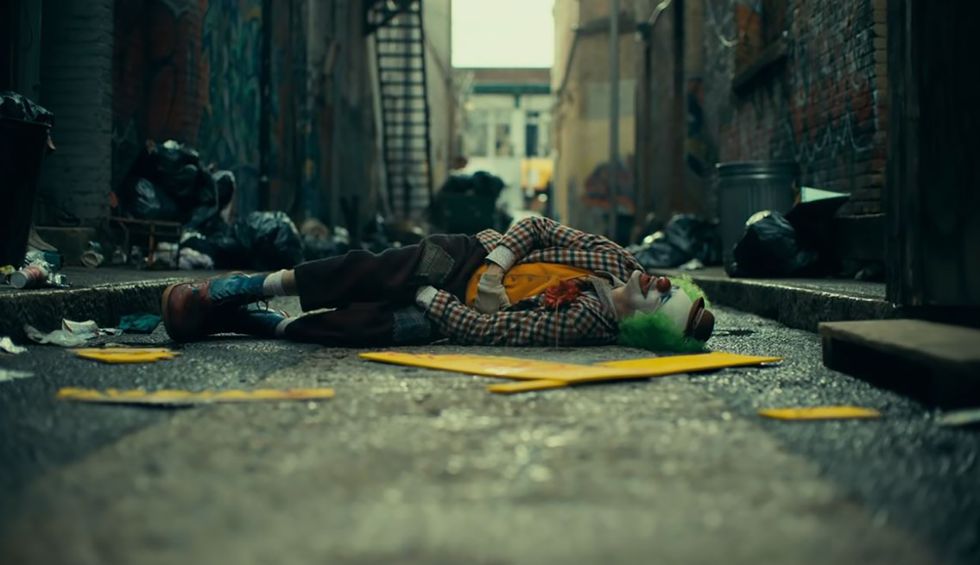 Even though Joker is supposedly set in the 1970s, Todd Phillips’ arresting film could easily be read as a metaphorical dissection of the mass protest votes that swept the UK and the US back in 2016. Millions of disenfranchised citizens voiced their disillusionment on both sides of the Atlantic by voting for Britain to leave the EU and electing populist Donald Trump as President of the United States.

Several economic and cultural shifts contributed to that momentum. One was the popularity of neoliberal policy which has dominated Western economies for the past 40 years or so. Neoliberalism favours deregulation, cutting taxes, competition and free markets while devaluing community, reducing the burden on the state and placing the responsibility for survival entirely on the individual. As US commentator Stephen Metcalf puts it:

The free market produces a tiny cadre of winners and an enormous army of losers – and the losers, looking for revenge … turned to Brexit and Trump.

Then there were the austerity years after the 2008 financial crash in the UK and the decline of the “Rust Belt” in the US, once the cradle of American manufacturing. All have resulted in disillusionment with establishment politics. In this “survival of the fittest” society, large chunks of the population have felt marginalised, ignored and left behind.

In Joker, Joaquin Phoenix’s character, Arthur Fleck aka Joker, is an archetypal “invisible man”. Abandoned by the state, forgotten by society and regularly suffering hostile treatment by his fellow human beings, he is left to his own devices in dealing with his mental health issues and social problems.

He feels, he tells his counsellor, like he does not exist. He loses his medication and free counselling sessions to austerity cuts, and is eventually left without a job and any meaningful human contact. He has nothing left to lose.

Arthur starts doubting the competence and motives of decision-makers. That doubt erupts into rage and violence which is sensationalised by the media, infecting the population. By the end of the film he has galvanised a movement of similarly disenfranchised individuals who renounce experts, the elites, the media, bankers and pretty much everyone else representing traditional power structures.

After his transformation into Joker, he announces on live TV that he is fed up with a system that unilaterally decides for everyone “what is right and what is wrong” and “what is funny and what is not”. Arthur Fleck becomes Joker just as the stagnating status quo is replaced by chaos and anarchy, when crowds of people dressed as clowns flood the streets, spreading violence and destruction.

Sound familiar? Maybe not down to the detail, but in broad strokes Joker evokes the spirit of the times when the very foundations of Western democracy are in danger, when large swaths of the population refuse to trust establishment elites (who they believe have betrayed them), reject unilateral decision-makers and launch an incoherent, uninformed, self-destructive offensive – revolt without an end game; revolt as an extreme form of self-expression – a revolt for the sake of revolt.

The Phillips/Phoenix version of Joker stands apart from previous portrayals of the character because of its attention to detail. Their Joker is no longer a sketchy clown simply embodying the momentum of mass madness. He has a detailed back-story, and he is human to the point that the audience empathises with him. Phoenix is mesmerising and believable, channelling the anguish and pain of the character in the most exposing of close-ups. With or without the mask, Phoenix’s Joker is a multidimensional character where previously it had simply been a super-villain archetype.

Yet Phillips is also true to the original spirit of the Batman/Joker war: he digs deeper into the capitalist self-doubt which has always been embedded in the story. Bruce Wayne/Batman is a wealthy industrialist and Joker is his alter-ego, his guilt, conveniently split off and rejected, while Batman remains a hero in his own and the city’s eyes.

Just as Wayne (and his family) represent the capitalist system, Joker reflects its dark side, its exploitation, its neglect of the underprivileged and the weak. In 2019 Joker embodies the anger that comes with the realisation that capitalism does not work equally for everyone.

Phillips traces the guilt to the elites, and turns the mirror back on to society. He goes back to the genesis of the Batman/Joker war, making it into a class conflict that grows out of the repeated rejection of Arthur by Bruce’s wealthy family. Joker, Phillips implies, is part of Batman, and has to be acknowledged as such.

By adopting social realism instead of the usual bird’s-eye view of the superhero aesthetic with its uncomplicated morality, the film explores the usually “othered” Joker as someone who refuses to be disowned by society. Instead of an attention-seeking psychopath we see a human demanding that the system at the very least acknowledges his existence. The elites are not prepared to compromise, and neither is he. To get noticed, he simply burns down the city.

In many ways, Joker points to 2016 when the crack on the surface of the neoliberal society suddenly became a chasm. The film calls for a compromise, for a closer look at the “other”. If anything, the character of Joker is truly a spirit of our times.