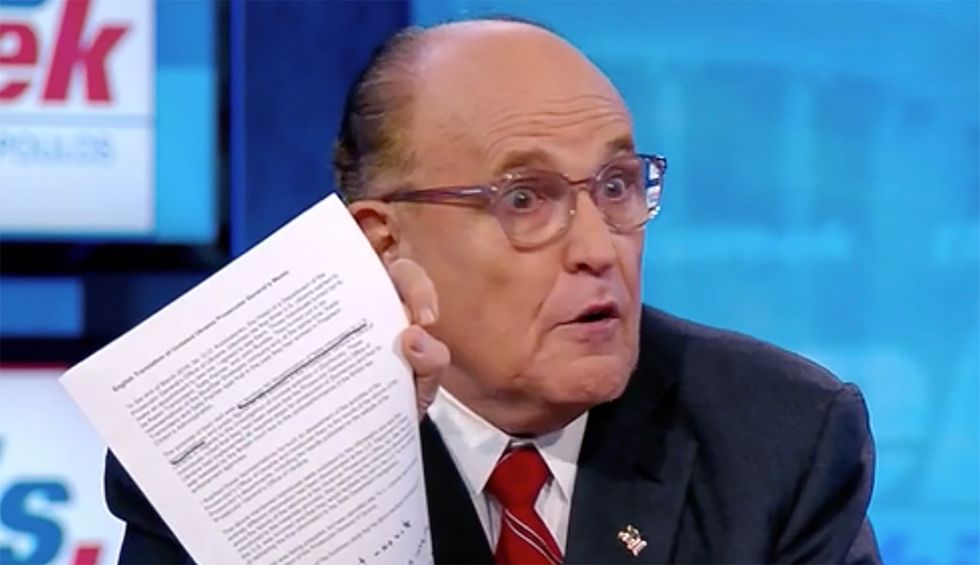 One thing never really fully explained amid all the dust kicked up by impeachment talk is the increasingly shadowy role being played by Rudy Giuliani.

Oh, we get the idea that he has made himself Donald Trump’s TV bulldog, snarling and scratching at anyone or anything looking like a PR nightmare for this narcissistic president. And that he is actually a lawyer with enough skill to have served as a U.S. attorney handling tough cases in the past.

But what exactly has he been doing presenting himself as representing the president and the State Department in Ukraine, lobbying and pressuring Ukrainian officials to look for political dirt on Joe Biden and his son, Hunter?

The would-be suave persuader has proved a constant, volcanic erupter of unproven assertions and emotional outbursts, yelling at interviewers and fellow panelists alike.

In multiple, ragged television appearances, the would-be suave persuader has proved a constant, volcanic erupter of unproven assertions and emotional outbursts, yelling at interviewers and fellow panelists alike. In the end, he simply makes us cringe rather than accept his ever-changing version of Trumpian bad behavior.

Giuliani, Trump’s personal lawyer, argues that he only contacted Ukrainian officials at the request of the State Department, to which the State Department clearly has reminded all that Giuliani is a private citizen who does not speak for the government.

He has called for investigations of “corrupt” Democrats and repeatedly alleged that former vice president Joe Biden and his son, Hunter, had done wrong in Ukraine. The allegation about the Bidens, which Trump has also voiced, has not been backed up by any official evidence thus far. Giuliani also has said, without evidence, that the former U.S. ambassador to Ukraine and an FBI agent assigned to investigate the Hunter Biden corruption allegations were both parts of a conspiracy organized by liberal billionaire George Soros.

Meanwhile, it is clear that Giuliani has been heavily entangled in Trump’s Ukraine dealings, which also involved the president withholding almost $400 million in military aid for the country, while national security officials were sidelined.

The Washington Post noted that Trump’s attempt to pressure the leader of Ukraine followed a months-long fight inside the administration that sidelined national security officials and empowered political loyalists — including Giuliani — to exploit the U.S. relationship with Kiev, current and former U.S. officials said. That sequence, which began early this year, involved the abrupt removal of Marie Yovanovitch, the U.S. ambassador to Ukraine, the circumvention of senior officials on the National Security Council, and the withholding of military aid from Ukraine. The Post said that several officials described tense meetings on Ukraine among national security officials at the White House leading up to the phone call on July 25 with Ukrainian President Volodymyr Zelenskyy seeking his help to dish dirt on Joe Biden.

Trump, of course, has acknowledged raising Biden with Zelenskyy but argues that it was good for him to have done so rather than an abuse of office to mix foreign affairs with domestic electoral politics.

According to The Post, although the whistleblower report focuses on the Trump-Zelenskyy call, it includes references to other developments tied to the president, including efforts by Giuliani to insert himself into U.S.-Ukrainian relations.

The person who appears to have been more directly involved at nearly every stage of the entanglement with Ukraine is Giuliani, who drew attention from U.S. intelligence officials because he was offering views that did not appear connected to U.S. priorities or policy.

Giuliani saw Zelenskyy, a political neophyte who was elected president of Ukraine in April, as a potential ally on two political fronts–punishing those whom Giuliani suspected of playing a role in exposing the Ukraine-related corruption of former Trump campaign chairman Paul Manafort, and delivering dirt against Biden. At the end of the Robert S. Mueller III investigation, Giuliani turned his attention to Ukraine, officials said. Marie Yovanovitch became a primary Giuliani target. Though she was widely respected in the national security community for her efforts to prod Ukraine to take on corruption, Giuliani targeted Yovanovitch with accusations including that she played a secret role in exposing Manafort and was part of a conspiracy orchestrated by the liberal financier George Soros. Yovanovitch is still employed by the State Department and is a fellow at Georgetown University.

Giuliani also said the State Department was a problem, and officials familiar with his actions say he regularly briefed Trump on his Ukrainian endeavors. The Post noted that many of Giuliani’s charges were either recycled from, or subsequently echoed by, right-wing media outlets.

Yovanovitch was ousted in May, and Giuliani seemed determined to seize an unsanctioned diplomatic role for himself, announcing plans to travel to Ukraine to push for investigations that would “be very, very helpful to my client, and may turn out to be helpful to my government.” Giuliani canceled the trip amid an ensuing backlash over his purpose but later met with a senior Ukrainian in Madrid to press the issue of Ukraine’s helping against Biden.

In a May 19 interview, Trump repeated disproved allegations that then-Vice President Joe Biden had coerced Ukraine to drop an investigation into the owner of an energy company, Burisma, for which Biden’s son was a board member. The allegations were baseless. Though Hunter Biden had served on the Burisma board for five years — a questionable decision given his father’s influential position — he was never accused of any wrongdoing by Ukrainian authorities. The probe had been shelved before any action by the vice president, and Joe Biden’s efforts involved removing a prosecutor widely criticized by the West as failing to tackle corruption.

Former national security adviser John Bolton could get straight answers about Giuliani’s agenda or authority, officials said. “You know who I did it at the request of? The State Department,” Giuliani has said repeatedly.

Although the question of a linkage or leverage never came up in the formal NSC discussions, participants began to believe that Trump was “withholding the aid until [Ukraine] gave him something on Biden or Manafort.”

It was in this stretch, in July, that some officials began to question the wisdom of a Trump call with Zelenskyy.

Apparently we could have hats asking to Make Giuliani Great Again.