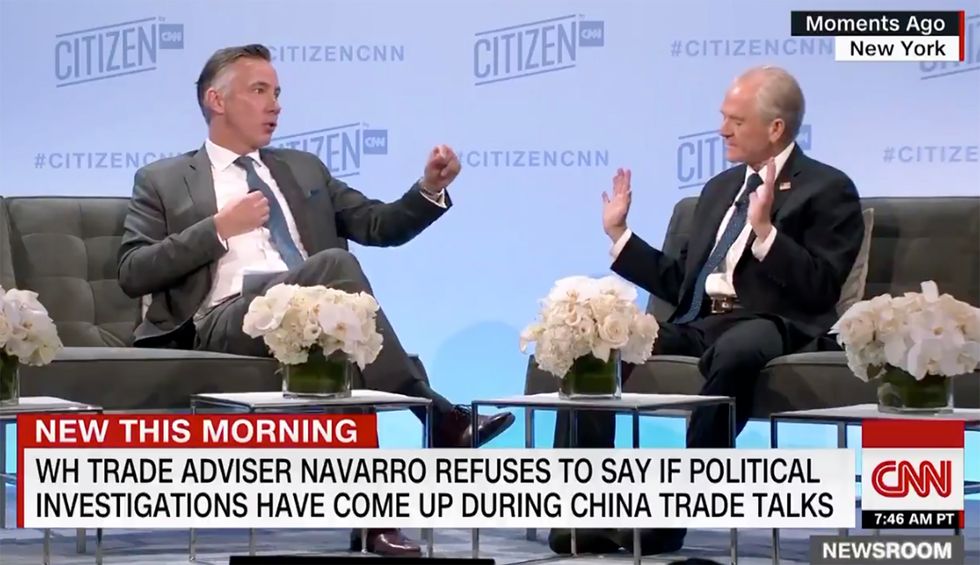 Even when he was facing an impeachment inquiry for asking Ukrainian President Volodymyr Zelensky to investigate former Vice President Joe Biden and his son Hunter Biden, President Donald Trump openly recommended that the Chinese government investigate the Bidens. This week, CNN’s Jim Sciutto asked White House Trade Adviser Peter Navarro if it was appropriate for Trump to ask the Chinese government to investigate the Bidens when trade discussions were taking place — and Sciutto got a very evasive non-answer.

Sciutto told Navarro, “The American people have a right to know if politics have entered trade negotiations.” And Navarro responded, “The problem that I have seen over the last three years in Washington is that there’s just too many stories that are reported based on anonymous sources” — adding that those sources “inevitably get it wrong.”

Sciutto, however, didn’t appreciate Navarro’s stonewalling and reiterated, “I’m asking you a direct question: did you bring up investigating the Bidens as part of a negotiation?”

Navarro responded that it wasn’t relevant, but Sciutto didn’t back down — asserting, “I’m asking if politics have entered the sphere of international relations here.” And Navarro never answered his question.

Here's video of @jimsciutto asking Peter Navarro if political investigations about the Bidens have come up during C… https://t.co/qDmTUJ65ew
— Oliver Darcy (@Oliver Darcy)1571929542.0

When CNN’s Oliver Darcy tweeted part of the interview, some Twitter users commented on how evasive Navarro was. @TrumpinTheShark commented, “Lordy. @jimsciutto is just asking basic questions, but because Navarro is so shifty and evasive, Jim is looking like Columbo here!” And @SueCinotti remarked, “Unbelievable. The R's want transparency except when they don’t. What hypocrites.”

Trump recently told reporters, “China should start an investigation into the Bidens.”