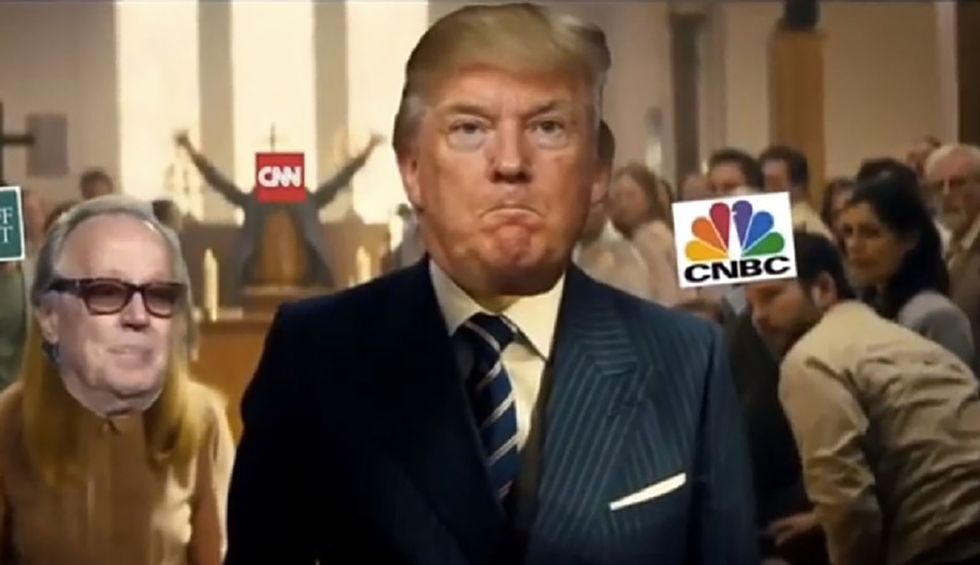 [A]fter the final destruction of the Nazi tyranny, they hope to see established a peace. . . which will afford assurance that all the men in all the lands may live out their lives in freedom from fear and want.

It was all in good fun  It took place for Trump supporters the weekend of October 14, 2019, at the Trump National Doral Miami.  That was the Trump-owned resort that was to be the site of the G-7 meeting in 2020, until it wasn't. It had been selected by Trump for the meeting of the G7 because, as Mick Mulvaney, Acting Chief of Staff explained: "Trump still considers himself to be in the hospitality business."

The event was organized by American Priority, a group that pretends to promote free speech.  It was attended by, among others, Sarah Huckabee Sanders, Florida Governor Ron DeSantis, and Donald Trump Jr.  In a room adjacent to the main ballroom at the hotel, a video that was produced by an anonymous person operating under the name of: "The GeekzTeam" was shown on a revolving loop. The video includes the logo for the trump 2020 campaign.  According to the New York Times's description of the video,  Mr. Trump's head is superimposed on the body of a man entering the "Church of Fake News. " As he walks down the aisle he stops, pulls out a gun, and opens fire on parishioners who have the faces of his critics, or the logos of media organizations superimposed on their bodies. Among his victims are "Black Lives Matter", and "Vice News." He continues walking down the aisle and as he approaches the alter, he is shown striking John McCain in the back of the neck, hitting Rosie O'Donnell in the face, and then stabbing  her in the head. He sets fire to Bernie Sanders' hair. The video ends with Trump standing on the church altar and admiring the victims of his violent behavior.

Reports suggest that there are many similar memes, as they are known, available on the internet, all depicting violent acts against critics of trump.  The Trump himself tweeted a video in which he participates in a wrestling match and body slams and beats up the CNN logo.  That tweet went viral among his supporters.

Although lacking internet, the Nazis knew the value of film in order to get their message to the people.  In 1930 the party established a film department. In Mein Kampf  Hitler wrote that: "The picture, in all its forms, including the film, has better prospects.  In a much shorter time, at one stroke I might say, people will understand a pictorial presentation of something which it would take them a long and laborious effort of reading to understand."

In 1932, Hans Traub, a Nazi propagandist,  said that film is a "formidable means of propaganda." Explaining its importance he said that: "Achieving propagandistic influence has always demanded a 'language' which forms a memorable and passionate plot with a simple narrative. . . . the most effective is the moving picture. . . . it has  an unimaginable richness of rhythm for intensifying or dispelling emotions."

Discussing films made in Nazi Germany, "Facing History and Ourselves" observes that although many films were made to glorify the Nazis, others were made to "dehumanize, criminalize, and demonize vulnerable minorities-particularly Jews." The Trump and his supporters know how that works.

Noel King of NPR conducted an interview of Taika Waititi, the director of the movie, "Jojo Rabbit" on October 18, 2019, the date the movie was released.  The movie is a satire of Nazi Germany,  and is about a 10-year old boy named Jojo  Rabbit. Jojo is in the Hitler Youth Movement and he wants to be the best Nazi he can be. In the film Jojo says  "I swear to devote all my energies and my strength to the savior of our country, Adolf Hitler."

The NPR interview concludes with a lengthy commentary from Mr. Waititi, that is especially timely in today's world.  "So we think we live in the safety of 2019?  Yes, we don't have to worry about Hitler and his retribution on us for making jokes about him.  [But} I mean, this film shouldn't really need to be made.  In 2019 do I really need to make a film with the heart of the message being, you shouldn't be a Nazi.  At the end of  World War II, there was a very clear and simple law.  If you're a Nazi, you go to jail because there's no room in this world for you and those ideas. Now, sadly, in America and other places, the law now is, if you're a Nazi feel free to go down to the town square and have a little rally because we've got this thing called freedom of speech. And you can sort of say what you want, and you're protected by that.  It's become very twisted. And if anyone says [about this movie] "oh, well, another World War II film-we get it.  That was 80 years ago." Well, we obviously don't get it-because we're getting dangerously close to this sort of thing happening again.  And we're living in a world where there are world leaders who are very happy to promote hate and intolerance and ideas that were prevalent in the '30s.'"