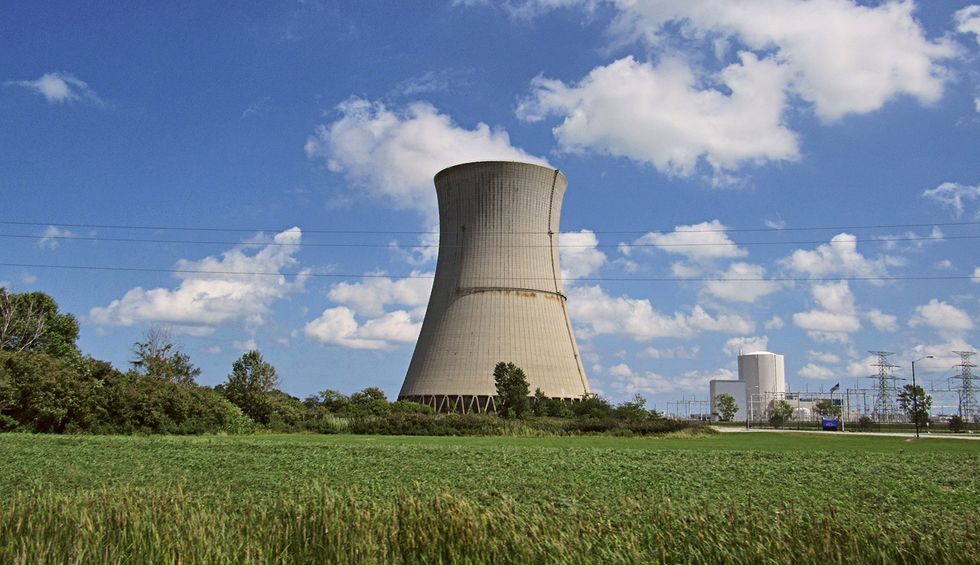 The unprecedented assault threatens the referendum process in Ohio and across the nation.

It also threatens to keep on line two very old, dangerously decayed reactors where melt-downs and explosions could forever contaminate the Great Lakes region and more. (For a full explanation, hear this one-hour discussion).

The story may end Monday, October 21, when signatures are due to qualify an anti-nuclear referendum for the fall 2020 ballot.

It begins with the July passage by the gerrymandered Ohio Legislature of HB6, a massive bailout scheme designed to subsidize the Perry and Davis-Besse nukes, plus two fifty-year-old coal burners, one of them in Indiana. HB6 does support ten small solar facilities. But it also kills an extremely popular, effective energy efficiency program along with larger subsidies for wind and solar energy in general.

The bailout is vehemently opposed by a large majority of Ohioans, including most of its usually pro-corporate media. Commercial, industrial and environmental groups did mount a massive campaign meant to stop the bill from passing. But with help from Democrats in both houses, the Legislature narrowly approved the bailouts.

Almost immediately, a referendum was filed for repeal. With 265,000 signatures due by October 21, Ohioans Against Corporate Bailouts began hiring canvassers.

Ohio’s GOP Secretary of State delayed the process as long as possible. He waiting a full 20 days before turning down the first petition submission. He then waited another 20 to certify the second.

But as soon as the referendum supporters began gathering signatures, pro-nuke forces attacked with a fascist assault unlike any other in US history.

First they began running an astonishing wave of TV ads claiming the referendum was a plot by Chinese Communists to take over Ohio’s electrical grid. The ads feature (they are still running!) hordes of goose-stepping Chinese soldiers, sinister footage of China’s dictator, shuttered US factories, and more.

Accompanied by high-gloss mass mailings, the pro-nuke forces are also running saturation radio ads warning Ohioans to shun all signature gatherers lest they be tracked by sinister communists out to ruin their lives and credit. A toll-free number is offered to those willing to call in the location of any repeal supporters.

But the pro-nuke gestapo has also leapt from mere media manipulation to physical intimidation. When the referendum-gatherers hit the streets, they were confronted by industry “blockers” to tangibly prevent them from doing their job. In one case (as filmed on a security camera) a blocker smacked the cell phone out of the hands of a signature gatherer as he tried to photograph her. Gatherers have widely reported close-up verbal assaults. In some cases as many as three paid blockers have surrounded a single signature gatherer to prevent anyone from coming near to signing a petition.

Because many of the signature gatherers are hired employees, they’re required to register contact information with the state. The pro-nuke mob has assaulted them with threatening phone calls. In some cases they’ve reportedly offered substantial cash payments and airline tickets if they leave the state. One signature gatherer reported being offered $2500 (!) for the day’s accumulated sign-up sheets, which would presumably then be shredded.

Under the circumstances, many now wonder if the pro-referendum forces have been able to accumulate the required 265,000 signatures, plus the many more needed for a traditional cushion. The Republican Secretary of State is certain to discard as many signatures as he can, especially with the micro-managed scrutiny of the nuclear industry.

The ramifications of such an outcome are staggering. It could signal the death of the popular referendum, a cornerstone of the democratic process.