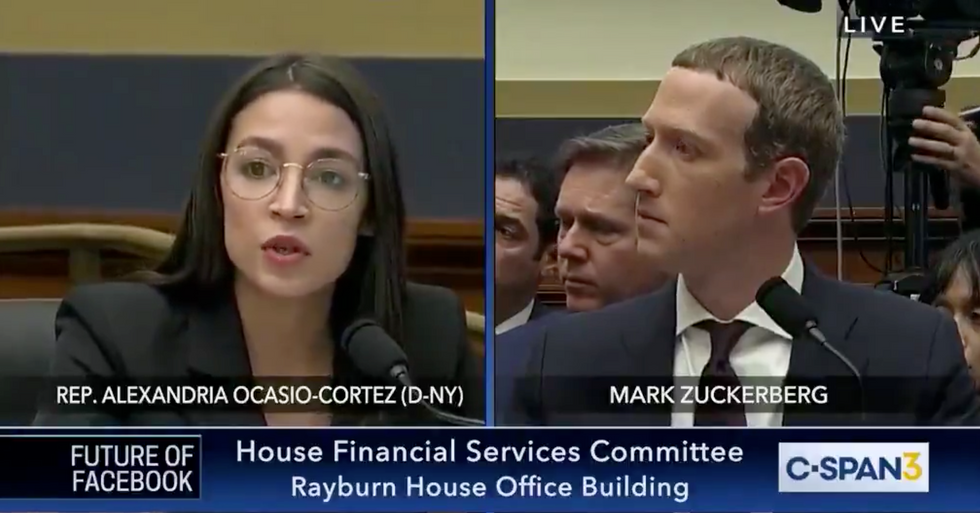 She began by grilling him on his knowledge of Cambridge Analytica, the company that was exposed for using Facebook to gather intricate data on millions of users without their consent. Zuckerberg gave few substantive answers, suggesting he was unprepared for these questions. As he did throughout the exchange, he repeatedly began his answers with the word "Congresswoman," an awkward verbal tic that made him sound evasive.

She then dug into an issue that has animated Sen. Elizabeth Warren (D-MA) in recent weeks: Lying in political ads on Facebook. Ocasio Cortez asked whether someone in her position could target black users with ads showing an incorrect date for an upcoming election.

"No, Congresswoman, you couldn't," Zuckerberg said. He explained that while the network won't fact-check political ads, it will prevent ads that could cause immediate harm, as well as voter or census suppression. "We will take that content down."

"So you will — there is some threshold where you will fact-check political advertisements? Is that what you're telling me?" asked Ocasio-Cortez.

He confirmed she was correct.

Next, she asked whether she could run ads targeting Republicans in primaries saying that they falsely vote for the Green New Deal.

Zuckerberg said he wasn't sure — but then added that she "probably" would be allowed to share such ads.

"Do you see a potential problem here, with a complete lack of fact-checking on political advertisements?" she said.

Then his answers became especially dodgy. He responded by saying he thought it would be "bad" for a politician to lie in an ad, but doesn't mean it would be right for Facebook to "prevent your constituents, your people in an election, from seeing that you had lied."

"In a democracy, I believe that people should be able to see for themselves what politicians that they may or may not vote for are saying and judge their character for themselves," said Zuckerberg. He also noted that there are differences in the treatment of ads compared to "organic posts."

But his appeal to "democracy" as a defense of Facebook's do-nothing policy fell completely flat, as did his suggestion that, by refusing to fact-check ads with potentially blatant lies, Facebook would be letting voters see that politicians had lied. Because the problem with a lie is that readers likely don't know whether its a lie when they read it. Allowing lies to proliferate may leave voters less informed about the candidates they could vote for. And it's hard to see how this isn't bad in a similar way to spreading disinformation about the date of an election, which Zuckerberg already acknowledged he would censor. If an advertiser can use Facebook to distort the truth about who people are voting for, then voters aren't necessarily any better off than if they were misinformed about the Election Day.

Of course, this is a vexing challenge not easily solved, because fact-checking ads would raise its own set of problems. But Zuckerberg's attitude, as Ocasio Cortez helped expose, is untenable. And Facebook is hardly just a passive observer — it is enabling the spread of these ads, apparently regardless to whether they contain outright disinformation, and it is profiting mightily from them. That gives the company a greater responsibility than it seems willing to take on.

Ocasio-Cortez went on to shed some light on some of the potential problems of Facebook's fact-checking practices that it employs in other areas. She pointed out that the Daily Caller, which has been repeatedly caught publishing white nationalists, has been used as a fact-checker for Facebook. Zuckerberg argued that he isn't responsible for this, either, because Facebook outsources its fact-check assessments to an independent group. But of course, Facebook must choose which independent intermediary it uses to find fact-checkers, so it can't plausibly distance itself very far from the fact-checkers that are eventually selected.