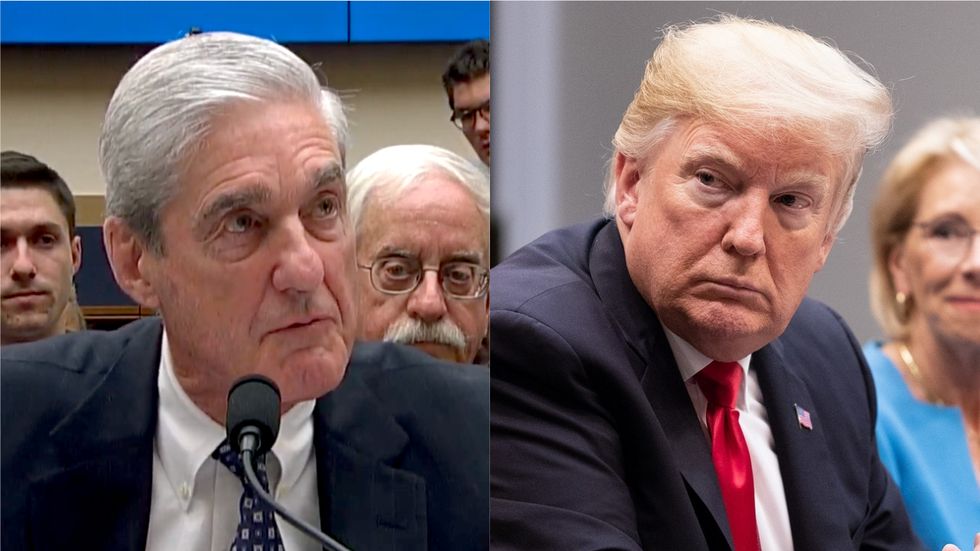 Lawyers for the House of Representatives claimed that they believe President Donald Trump may have given Special Counsel Robert Mueller false information in the course of his investigation, and this information may be hidden in his report's redactions, according to a new court filing on Monday.

The news came in the midst of a battle between House lawyers, who are fighting to gain access to the grand jury material in Mueller's investigation as a part of the Democrat's impeachment inquiry into the president. Grand jury testimony and evidence must be kept secret except under certain circumstances, and the House lawyers argue that the impeachment inquiry qualifies as a legitimate exception to the secrecy. The Justice Department has fought these requests in court, arguing that the House has not been in an official impeachment inquiry.

In the filing on Monday, the House lawyers included a provocative argument for unsealing the grand jury materials. In favor of releasing the information, they cited "the critical importance of gaining a full understanding of the events described in Volume I of the Mueller Report—events that the President may have been motivated to cover up when he engaged in the misconduct described in Volume II."

They added: "Those events may also be relevant to the House’s investigation of the President’s solicitation of Ukrainian interference in the 2020 election."

The filing goes on to say that the Judiciary Committee "has grounds to believe may show that the President provided false statements in his written answers to the Special Counsel’s office." Since purposely misleading Mueller in the course of an investigation would a crime — a crime quite like the one Trump's former national security adviser has already pleaded guilty to — this would be a significant development, if substantiated.

So what is it that Trump may have misled Mueller about? The lawyers allege he may have lied when he told Mueller that he was not aware of communications between his campaign and WikiLeaks.

However, while there's a case to be made that the redacted portions of the report could shed light on this question, it's not clear that the grand jury material is central to answering this question. The lawyers point to page 18 of Volume II of the report, which includes a heavily redacted paragraph discussing Rick Gates, Paul Manafort, Trump, and potentially, contacts with WikiLeaks. Because of the redactions, the paragraph is difficult to make sense of.

Though the lawyers never mention specifically the idea that Trump "lied" to Mueller, which would be a crime, their statements here make clear that's what they're suggesting. Trump wouldn't be obstructing justice by providing untruthful answers to Mueller unless he was intentionally doing so, since obstruction as a criminal act requires intent.

But while there is a decent argument to be made for the lawyer's interpretation of the report, their claim that the grand jury material would be relevant to this question is on shaky ground. That's because the redactions in the relevant paragraph indicate that the material is restricted because revealing it would pose harm to an ongoing matter, not because it is implicated in grand jury secrecy. There is a footnote in the paragraph with a single, brief redaction, apparently relating to the existence of Manafort's grand jury testimony, but it's hard to see how the information hidden in this redaction would be dispositive about Trump's potential lies.

We are still likely to see the rest of the material in the paragraph relatively soon, nevertheless. It seems that the "ongoing matter" referred to in the paragraph's redactions relate to the ongoing case against Roger Stone, who was carrying out an effort to contact WikiLeaks and will face trial in November. Once that trial has concluded, it's likely the information related to Stone that is redacted in the report will be made public at some point. That could potentially implicate Trump in deception.

Despite this relatively weak argument in the case, the House lawyers have a strong argument overall. Democrats are driving hard for an impeachment inquiry now, and there's good reason to think it qualifies as enough of a judicial proceeding that the investigation justifies releasing the grand jury material.