Here's what the Lincoln-Douglas debates can teach presidential contenders 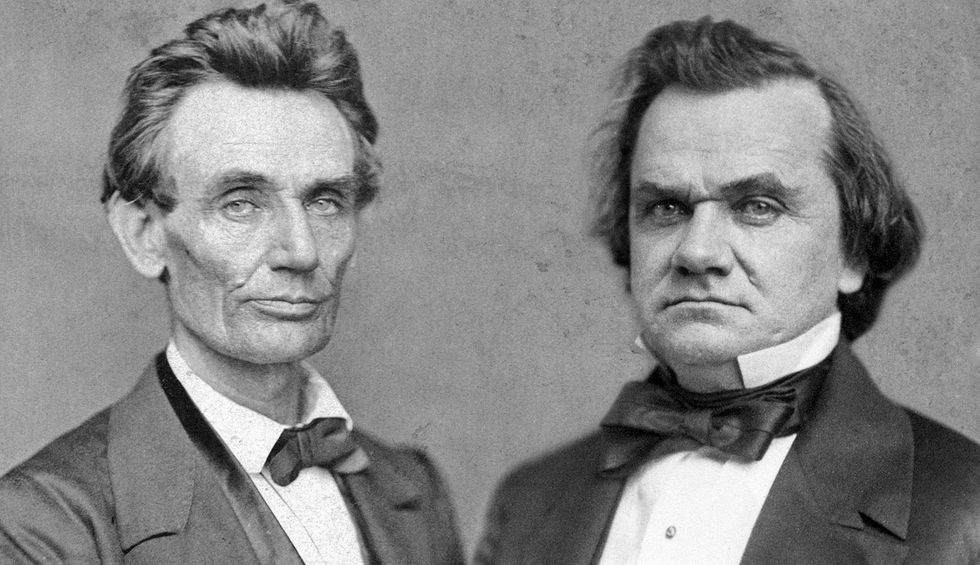 Political insults and conspiracy theories are nothing new in American history. One election in particular set a standard for nasty charges and countercharges. In the 1858 Illinois senatorial contest, Abraham Lincoln and Stephen Douglas hurled insults and half-truths that sound eerily like today’s rhetoric.

Today people remember the debates because of Abraham Lincoln, but in 1858 Stephen Douglas was the one constituents came to see. Lincoln began his campaign by following Douglas around the state and challenging him to debate, taking advantage of the crowds who came to see the incumbent. Douglas had little to gain by appearing on the same stage with Lincoln but refusing to debate would have seemed cowardly.

The State of Illinois was open and changing rapidly from its frontier beginnings. Census figures show the population more  bythan doubled between 1850 and 1860. Illinois was divided along sectional lines that mirrored the same highly charged atmospheres in the northern, border, and southern states. The northern part of Illinois identified with the antislavery views in New England. Its southern counties had been settled by people from the South who supported the institution of slavery. In the middle counties many people had come from the Border States, hoping to get away from economic competition with wealthy plantation owners. They came to make a better life butdid not view slavery as wrong.

Lincoln and Douglas appeared together on seven debate stages and wrangled for a total of 21 hours. Two Chicago newspapers, The Chicago Press & Tribune and Chicago Times published transcripts of the debates within days. Newspapers and public figures across the country felt Lincoln’s and Douglas’s campaign rhetoric predicted what would happen in other political contests around the nation. Lincoln and Douglas did not differ on the economy, infrastructure or other issues concerning voters. Whether slavery could be extended to western territories was the issue that separated the candidates.

Their extended discussion helped harden positions on all sides. In the summer of 1858, for example, South Carolina Representative Milledge L. Bonham lamented the loss of Kansas as a slave state and called for one remedy—secession. In October Republican Senator William Henry Seward predicted drastic consequences and an “irrepressible conflict.” Seward went farther than Lincoln, who attacked the institution of slavery when Seward attacked slaveholders as well.

Lincoln ultimately lost his bid to become the senator from Illinois, but his performance during the debates raised his national profile. The campaign speecheswere published and became a best-selling book. With continued support from The Chicago Tribune, Lincoln becamethe Republican nominee for president in 1860. A president opposed to an expansion of slavery alarmed southern leaders and the prospect of civil war increased. People moved away from the orderly discussion Lincoln and Douglas had toward violent sectional conflict.

In 1994 C-SPAN revived the impact of these debates by producing 22 reenactment events, and Dr. John Splaine wrote a companion book, in which he summarized the candidates’ tactics. Dr. Splaine’s observations can also be applied to modern politicians. Many of the 1858 tactics continue to be heard on the campaign trail. For example:

1. Repeat the message many times to create an impression of truth. (Stephen Douglas made arepeated, false claim that Lincoln failed to support troops during the Mexican War.)

2. Put the opponent on the defensive (Douglas reminded voters that Lincoln had only served one term as a U.S. Congressman and lacked the experience necessary to become a senator.)

3. Throw your opponent’s words back with a new slant (Douglas said Lincoln’s House-Divided speech would cause a war and destroy the South, while Lincoln claimed Douglas was part of a conspiracy to spread slavery across the nation.)

4. Turn the tables (Both candidates pushed the other to answer pointed questions.)

5. Connect with the audience on a personal level (Lincoln told one crowd he was raised a little east of the town “I am part of this people.”)

6. Appeal to the audience’s goodwill.  Atthe sixth debate in Quincy, Lincoln said, “I am not…trying to prove that we [Republicans] are right and they [Democrats] are wrong." Douglas responded, “My friends…Let us…unite as one people throughout the land.

7. Ignore it—if you can (Neither candidate refuted allegations when he could get away with remaining silent. Douglas made a virtue of his silence and emphasized how difficult it is to make moral judgments apply in public affairs. He stuck to the opinion the states possessed the only right to act on the issue of slavery but did not defend the institution and tried to remain above the fray. “Let us leave each other alone.”)

8. Incite the crowd (Both men insulted his opponent and got the crowd to yell such things as, “hit him again!”)

9. Use sarcasm skillfully (The debate texts are dotted with audience interruptions of laughter, cheers, and applause. In one instance, Douglas said Lincoln had been a simple shopkeeper, serving hard liquor, when Douglas had already advanced to teaching school. Lincoln responded that Douglas was one of his best customers.)

10. Create fear (Both candidates claimed if the policies of the other were adopted the nation’s worst fears would be realized—trampling on the rights of states, continuing slavery, or causing a war.)

The Lincoln-Douglas debates became pivotal moments in national politics, and their lessons are vital today when such tactics are being inflicted upon voters. Douglas used methods that continue to dominate—pageantry, cleverness, wealth, and backing from a political machine.

However, there are important differences between then and now. During the 1858 debates both Lincoln and Douglas wanted to avoid dividing the country. Although Lincoln lost the election, he won the future by articulating moral arguments. He continually reminded citizens that the Union was worth saving only when it lives up to the promise of the Declaration of Independence. Lincoln helped people escape the narrow focus of their attention. And both candidates respected the democratic process. They asked voters to sort through mounds of partisan propaganda, forego personal concerns for the sake of one major overriding issue, demand integrity from both sides, and do whatever necessary to understand the issues.

Georgiann Baldino has been publishing fiction and nonfiction since 2004, primarily concerning the American Civil War era. Her 2018 book, A Family and Nation Under Fire,from Kent State University Press was selected as a finalist for the Foreword Magazine, Inc. Book of the Year Awards for 2018 in the Adult Nonfiction category. Her newest release, Glory for the Brave, was a finalist in Bob Rich’s 2018 Book Edit Contest.