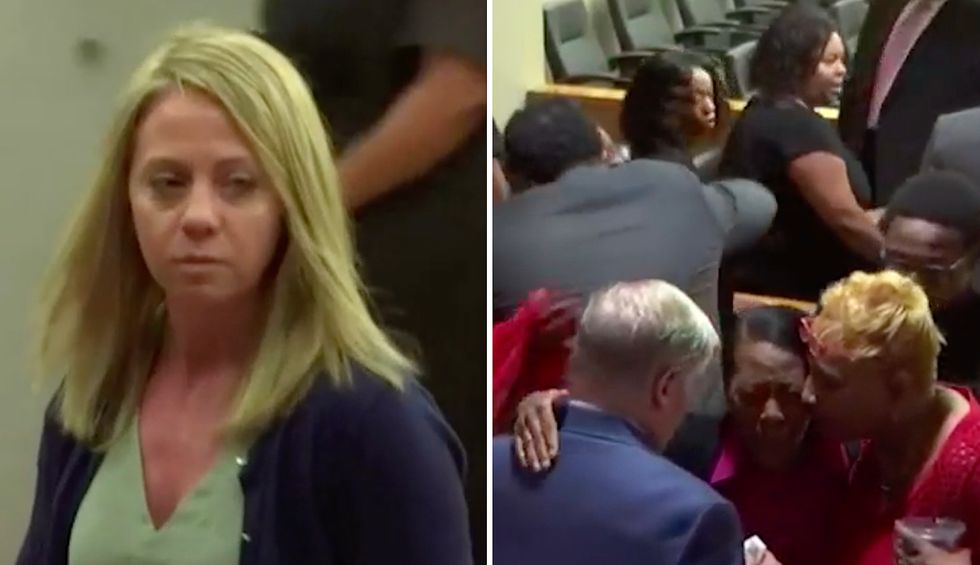 After a short deliberation, a Dallas jury has found ex-police officer Amber Guyger guilty of the murder of Botham Jean.

The former cop was charged with first-degree murder after she busted into her downstairs neighbor’s apartment the night of Sept. 8, 2018, and shot him in the chest. Guyger’s defense team argued that she believed the 26-year-old accountant’s apartment was hers, and therefore he was the intruder, not she. However, after less than 24 hours of deliberations, the jury came back to say Guyger, now 31, was guilty of murder.

Guyger’s initial statements on the matter were conflicting, as were her actions after mortally wounding Jean and realizing her error. Prosecutors highlighted the fact that Guyger stood safely outside of the apartment before deciding to go inside with her gun drawn, ultimately killing Jean. The premeditation involved in choosing to go in with guns blazing when there was no immediate threat to her person, even if she had been at her own apartment, seems to have been the logic the jury was able to use when seeking justice in this case.

Late Monday, Judge Tammy Kemp allowed the state’s version of a “Stand Your Ground” defense, called the Castle Doctrine,” to be considered by jurors, providing yet another out for Guyger. Jurors were already given the option of a lesser charge of manslaughter.

Guyger’s defense lawyers put the fired police officer on the stand Friday, where prosecutors used their cross-examination time to expose her positions and perception of the night as showing a high level of selfishness and lack of empathy toward Jean.

A Facebook account described Botham “Bo” Jean this way: “Botham was so many things, an immigrant from St. Lucia, a college graduate from Harding University in Arkansas, an ambitious accountant here in Dallas, a friend, a son, a worship leader, a volunteer, but more than anything those who knew him say he was a man who loved life and loved God.”

Here is the moment the verdict was read: