Fox host confronts GOP congressman spinning Ukraine facts with damning texts: 'Does that concern you at all?' 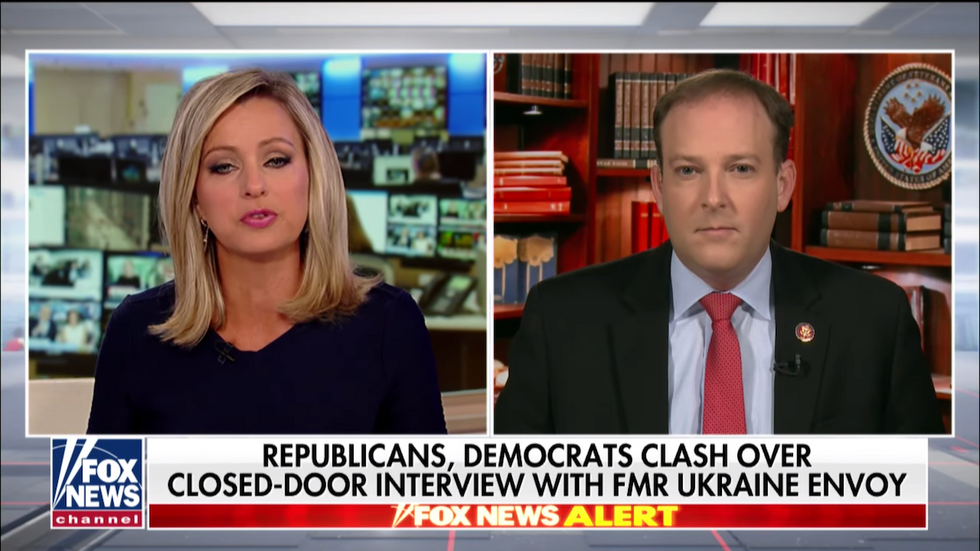 President Trump’s former special envoy to Ukraine, Kurt Volker, spent more than 9 hours in a closed-door hearing on Thursday, testifying before House Democrats as part of their impeachment inquiry. After the hearing, text messages between Volker and other US diplomats were released, painting a picture of American foreign policy being influenced by Trump’s political interests.

GOP congressman Lee Zeldin (NY) was in the hearing, and he appeared on Fox News this morning and quickly found himself on the receiving end of some tough questioning by Fox anchor Sandra Smith.

At the outset of the segment, Zeldin said that he felt Volker came across as “candid and genuine” during his testimony and “basically put a dagger through the heart of [Adam Schiff’s] fairy tale impeachment story,” adding that Volker’s testimony “basically just destroyed” Democrats’ claims that there was a “quid pro quo” in Trump’s infamous July 25 phone call with Ukraine President Volodymyr Zelensky.

“They knew that they didn’t have those funds yet though, congressman, correct?” Smith interjected.

“They raised no concern whatsoever,” Zeldin replied after a brief pause.

Smith then read from the September 9 text messages which were recently shared with Congress, where top U.S. diplomat to Ukraine, Bill Taylor, wrote that he thought it was “crazy to withhold security assistance for help with a political campaign.” Smith asked Zeldin why Taylor would make the suggestion that there was going to be a withholding of aid by Trump until an agreement was made by Ukraine to investigate Joe Biden and his son.

Zeldin suggested that Smith was just cherry-picking from the texts, whereas the full transcript of the text would put the story in a fuller context.

“Bill Taylor wanted aid to be provided to Ukraine. He believed in the mission, as did Ambassador Volker … they wanted the aid released,” Zeldin said, adding that Taylor’s concern about a quid pro quo was “immediately shot down” when he brought it up during the text exchange.

Smith continued to press Zeldin on Taylor’s concerns, reiterating that “somehow, he was led to believe there was a plan” to withhold the aid.

“Does that concern you at all?” Smith asked.

Watch the full exchange below: