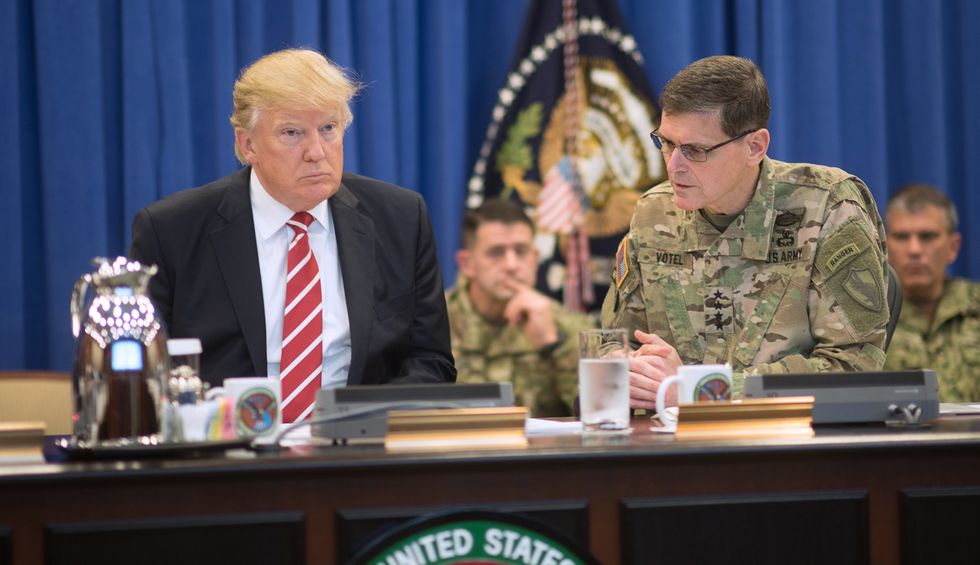 President Donald Trump shocked the U.S. military and the national security community with the announcement that he would be withdrawing U.S. troops from northeastern Syria — a move that critics of the decision have denounced as a slap in the face to the Kurdish-led forces U.S. troopers have been working closely with in that area. Two military experts, Gen. Joseph Votel and Elizabeth Dent, analyze the decision in an article for The Atlantic, explaining why it could have terrible consequences.

Votel (a four-star general) served as commander of U.S. Central Command (CENTCOM) from March 2016 until March 2019, while Dent worked in the U.S. State Department from 2014-2019 and was part of the U.S. Global Coalition to Defeat ISIS. Both of them played important roles in U.S. efforts against the terrorist organization ISIS (Islamic State, Iraq and Syria), and they stress in their Atlantic piece that Trump’s “abrupt policy decision to seemingly abandon our Kurdish partners could not come at a worse time.”

“The Islamic State was using Syria as a sanctuary to support its operations in Iraq and globally, including by hosting and training foreign fighters,” Votel and Dent recall. “We had to go after ISIS quickly and effectively. The answer came in the form of a small band of Kurdish forces pinned up against the Turkish border and fighting for their lives against ISIS militants in the Syrian town of Kobane in 2014.”

Kurdish-led forces, Votel and Dent stress, have played a crucial role in weakening ISIS in northeastern Syria. But Trump’s “sudden policy change this week breaks that trust at the most crucial juncture and leaves our partners with very limited options,” they write.

Captured ISIS fighters are being held in areas under the control of the United States’ allies in the Syrian Democratic Forces (SDF). And Votel and Dent warn, “The SDF has already stated that it will have to fortify defense mechanisms along the Syrian-Turkish border, leaving ISIS detention facilities and encampments with little to no security.”

Trump has insisted that ISIS has been “100%” defeated in Syria. But Votel and Dent disagree and conclude their article by warning, “This policy abandonment threatens to undo five years’ worth of fighting against ISIS and will severely damage American credibility and reliability in any future fights where we need strong allies.”