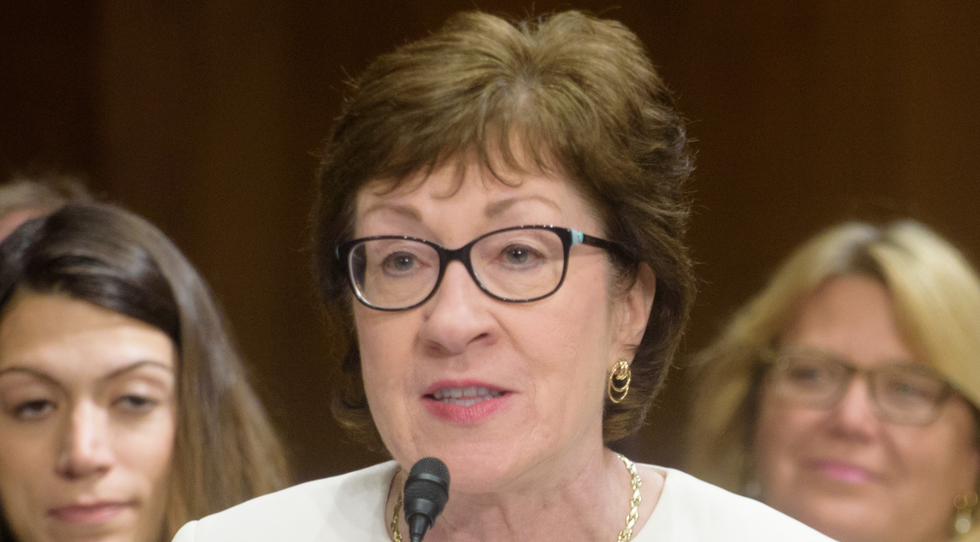 Last month, the lone Republican primary challenger to Sen. Susan Collins was forced out of the race. Now Republicans have consolidated their support behind her, and there is absolutely no question of her running as a moderate or an independent in 2020. But she's still going to try.

Remember the Never Trumper Collins, who wrote an op-ed in The Washington Post after he secured the Republican nomination saying she wouldn't vote for him? She was pilloried at home by Republicans, including then-Gov. Paul LePage, who declared, "I think Susan Collins is done in Maine; I think her decision to go against the Maine Republicans really cooked her goose."

Hence Collins' subsequent total embrace of Trump—she had to avoid a serious primary—and Mitch McConnell's total embrace of her. And it worked. Here's what LePage has to say today: "I'm supporting Susan. […] She is tough and a fighter. She has worked hard, and I know she will continue to work for all Mainers once she wins."

With all that, here's what her campaign spokesman Kevin Kelley has to say about that endorsement: "It's incredibly difficult being a moderate in politics, especially these days when people like Sen. Collins are constantly being criticized from extremists on the far left and the far right." Seriously. She just got a bear hug from LePage, who regularly called himself "Donald Trump before Donald Trump became popular." LePage, who was the far-right extreme of Republican governors for years.

"But she still believes that a majority of Mainers, and Americans, reside in the middle," Kelly said. She might believe that, but she sure as hell abandoned any claim to the middle herself. But still he piles this bullshit on. "And there have certainly been times when some officeholders, both Republicans and Democrats, have made clear they did not agree with one of her decisions," he said. "But what matters most to Mainers is that Sen. Collins doesn't rush to a partisan corner. She takes the time to study an issue and reaches a decision only after she has considered viewpoints from all sides."

Right. Like she seriously considered the testimony of Christine Blasey Ford about Brett Kavanaugh. She didn't take her time on that one; she promised her vote to Trump and McConnell before Kavanaugh was even officially nominated to a seat on the Supreme Court. So, yeah, that.

Collins made her decision to be a pawn in the game being run by McConnell for Trump. Period. No amount of platitudes and furrowed brows on her part will wash that away. Her only hope is action, like vowing to force McConnell to have a real hearing on impeachment articles and recruiting enough of her fellow Republicans to join her. That might ameliorate some of the permanent damage she's done to the nation by abetting Trump. Maybe.