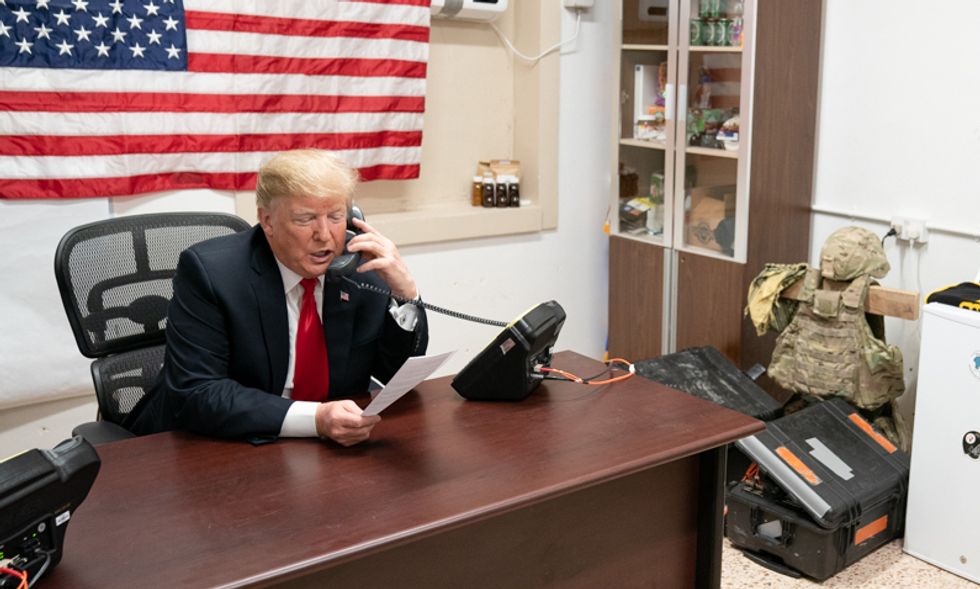 As pundits and lawmakers debate the severity of President Donald Trump's conduct in the Ukraine scandal and whether his actions constituted an illicit quid pro quo, newly revealed texts show that such concerns were bubbling up within the administration before these issues became public.

In one stunning text published by ABC News Thursday afternoon, leading U.S. diplomat to Ukraine Bill Taylor wrote to another State Department official: "I think it's crazy to withhold security assistance for help with a political campaign."

ABC News reported that the texts were shared with Congress on Thursday by former U.S Special Envoy to Ukraine Kurt Volker.

Taylor was messaging with U.S. Ambassador to the European Union Gordon Sondland, who told him the accusation was "incorrect." The president, Sondland reportedly said, was "crystal clear no quid pro quo of any kind." Then, apparently fearing the events exactly as they're unfolding now, he reportedly wrote: “I suggest we stop the back and forth by text.” (ABC News noted that Sondland was a major donor to Trump, giving him $1 million to his inaugural committee, so he would be predisposed to spin the facts in favor of the president.)

Clearly, these texts will be jumped on by lawmakers on both sides. Democrats will point out, correctly, that even Trump administration officials interpreted the president's actions in exactly the damning light that has been feared. Republicans will doubtless point to Sondland's claim that Trump has been "crystal clear no quid pro quo of any kind" as exoneration.

But of course, just saying you're not carrying out a quid pro quo while taking all the steps sufficient to carry on out does nothing to diminish your wrongdoing. As I've argued, the evidence for a quid pro quo is compelling.

And yet, as I and others have repeatedly said, what Trump already admits to — collusion with a foreign government to gin up dirt on a political rival — is already impeachable and condemnable behavior.