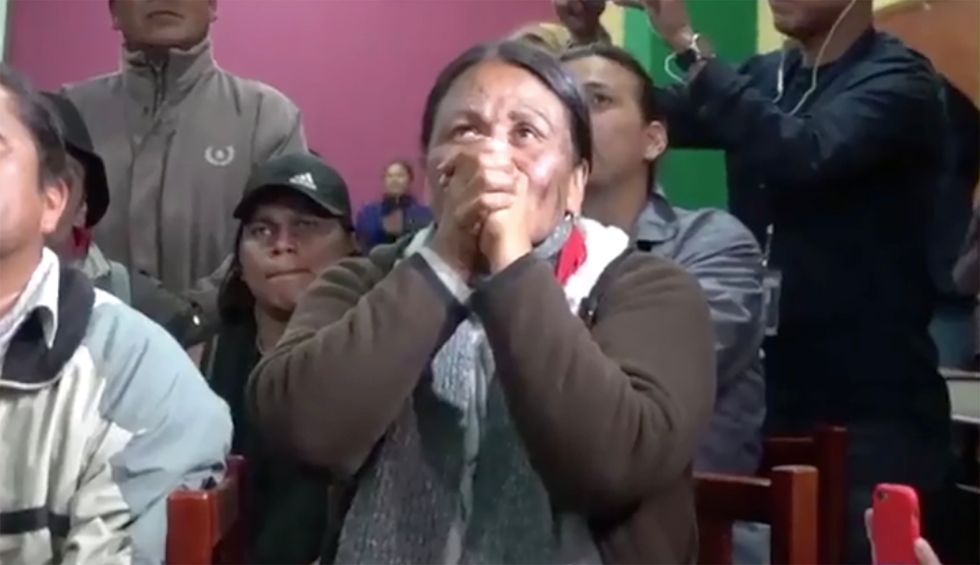 Indigenous groups in Ecuador celebrated Monday after news broke late Sunday that the country's leader, President Lenín Moreno, would make a deal with protestors that shut down the Latin American nation in nearly two weeks of demonstrations and scrap a controversial austerity package.

"I’m so happy I don't know what to say," said indigenous protester Rosa Matanago. "I don't have words, I'm so emotional. At least God touched the president's heart."

The protest movement in Ecuador began on October 2 after a coalition of indigenous groups, the Confederation of Indigenous Nations in Ecuador (CONAIE), launched demonstrations against the Moreno government's proposal to eliminate fuel subsidies in an effort to reduce the country's debt to the International Monetary Fund (IMF). Moreno also proposed slashing salaries for public workers as a way to generate funding to pay down the IMF debt.

As Common Dreams reported on October 8, the protests led to Moreno temporarily relocating his government outside of the capital, Quito.

The New York Times on Monday explained the dispute at the heart of the clashes:

Elimination of the popular subsidies was a keystone of the broad austerity plan required by the IMF in order to extend Ecuador a credit line. The loan was meant to bolster the country’s economy, which has deteriorated in recent years because of lower oil prices and a strengthening dollar that has left the country’s exports more expensive.

CONAIE president Jaime Vargas told The Guardian that the work is just beginning to negotiate a way forward for Ecuador but that he was heartened by what the protest movement—which reportedly left seven demonstrators dead and over 2,100 wounded or arrested—accomplished.

"We want peace for our brothers and sisters in this country," said Vargas. "We don't want more repression."

Video of the celebrations of indigenous protesters spread across social media Monday.

Massive celebration outside of the Casa de la Cultura in Quito as Lenin Moreno bows to pressure my Indigenous and o… https://t.co/OWCL0d75Uq
— Camila (@Camila) 1571024402.0

Anti-war advocacy group CodePink urged caution from those celebrating the cessation in hostilities.

"This may be a victory for the indigenous people of Ecuador," the group tweeted, "but neoliberalism still reigns in the country."