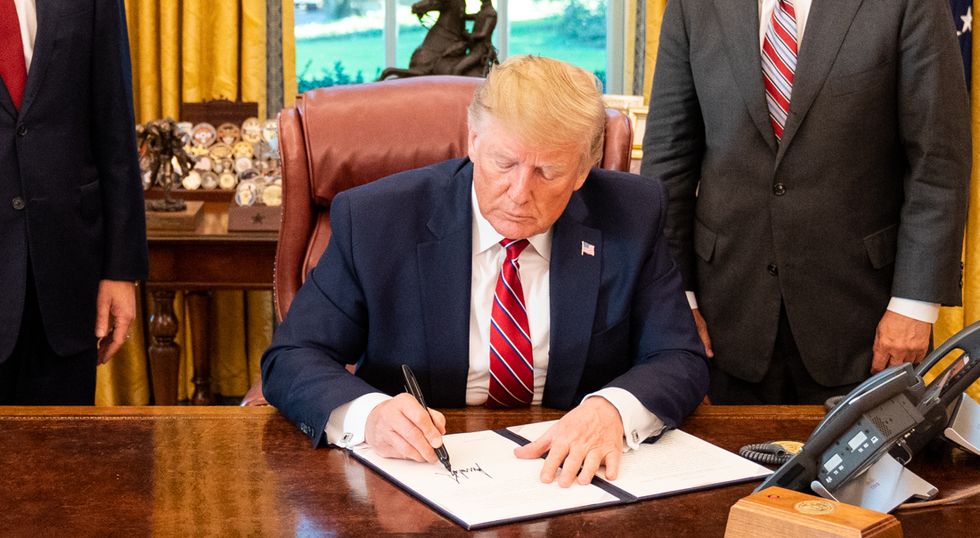 Fox Business host Trish Regan — a passionate supporter of the president — revealed a letter Donald Trump sent last week to the leader of Turkey that, had another outlet reported it, would almost certainly have been denounced as too ridiculous to be real.

While President Recep Tayyip Erdogan began a brutal assault on American Kurdish allies in northern Syria last week after Trump gave him the green light by pulling U.S. forces out of the region, regret apparently began to sink in by midweek. On Wednesday, Oct. 9, Trump sent a letter to Erdogan after the invasion had already begun, beginning with the words: "Let's work out a deal!"

From there, it only became more absurd. He concluded the letter by saying, "Don't be a tough guy.  Don't be a fool! I will call you later."

Read the whole thing below:

Putting aside the juvenile nature of the letter,  the document adds to the completely incoherent mess that constitutes Trump's policy toward Turkey, Syria and the Kurds. It came just days after Trump spoke to Erdogan on the phone and released a follow-up statement saying U.S. troops would move out of the way as "Turkey will soon be moving forward with its long-planned operation into Northern Syria." The statement added that "Turkey will not be responsible for all ISIS fighters in the area captured over the past two years..." This sent a clear signal that Trump would let Turkey carry out its incursion.

Trump has since indicated that he wants to sanction Turkey for its attacks, but added on Wednesday that he views the Kurds that Turkey is attacking as worse terrorists than ISIS, adding that they're "no angels." This is exactly how Erdogan justifies his attack on the Kurdish people, and Trump now seems to be supporting that view.

So while innocent people are being killed and many more lives hang in the balance, Trump cannot even approach having a consistent, principled foreign policy. His own jabs at diplomacy and conflict resolution are humiliating failures. It's a devastating result for the Kurds and a shameful and lasting scar for the United States.