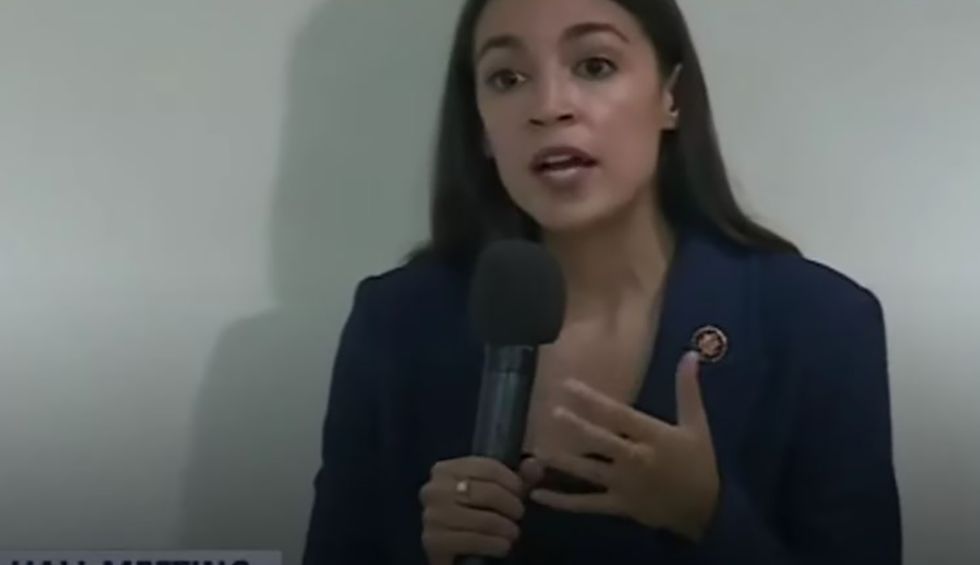 After an exchange with a covert Trump supporter during a local town hall event in her congressional district Thursday night kicked off the viral hashtag #EatTheBabies, Rep. Alexandria Ocasio-Cortez called for compassion and told right-wingers waging attacks to "knock it off" in the name of decency.

The incident began when a questioner in the audience asked Ocasio-Cortez about the planetary climate crisis. The woman warned that "we only have a few months left" to act and began to speak about the need to eat human babies in order to solve global warming. As the woman spoke, she removed her coat to reveal a t-shirt that read: "Save the Planet, Eat the Children."

Though it was obvious the congresswoman, her aides, and others in the room were growing increasingly uncomfortable, the woman was treated with sympathy and dignity as the microphone was taken away. Ocasio-Cortez then attempted to address the issues raised while also seeming to reassure the crowd—and the woman herself—that "if we act in a positive way there's space for hope. We are never beyond hope."

Following the event, as footage of the incident began to spread online, mostly pushed by right-wing journalists and media operatives, Ocasio-Cortez took to her Twitter account to acknowledge what had occurred.

"This person may have been suffering from a mental condition," she added, "and it's not okay that the right-wing is mocking her and potentially mak[ing] her condition or crisis worse. Be a decent human being and knock it off."

Some observers surmised the individual may have been acting the part of someone who was unstable to troll the congresswoman in order to discredit her support for a Green New Deal, but it would have been difficult to know that in the moment. Reporting now suggests the whole thing was staged by a pro-Trump group:

That viral #EatTheBabies video from AOC's town hall? The woman was a plant and a pro-Trump fringe group that has… https://t.co/deZGTloKh3
— Allyson Chiu (@Allyson Chiu) 1570192543.0

The connection of this stunt to LaRouche was first noted by London-based Matthew Sweet, author of the book Operation Chaos, which looks at conspiracy theorists of the late 1960s, including Lyndon LaRouche Jr., the late cofounder of the group. LaRouche, who was perhaps best known for his antisemitic conspiracy theories, died this past February. LaRouche claimed that Jews were actually funding the KKK and said that the Queen of England wanted to have him killed.

"It is textbook stuff,' Sweet told Gizmodo via Twitter DM, referring to yesterday’s bizarre stunt. "They have been in this game for decades."

In a new tweet on Friday morning, Ocasio-Cortez acknowledged that the reporting was likely accurate:

Others credited AOC for handling the way she did in the moment.

"Ocasio-Cortez handled the situation at her townhall with the same uncommon empathy & class that she has demonstrates in office every day," tweeted one online observer. "The last thing to do with someone clearly experiencing a mental health crisis is antagonize or shame them. Well done."

The congresswoman's Thursday night plea, however, did not keep the provocative hashtag from proliferating in the right-wing echo chamber as Republicans continued to eat it up.

"The Democrats like @AOC  want to kill and #EatTheBabies," declared Omar Navarro, a Republican challenging Rep. Maxine Waters for her seat in California, on Twitter. "It's a sick plan. Our @POTUS  @realDonaldTrump should have an easy time winning in 2020."