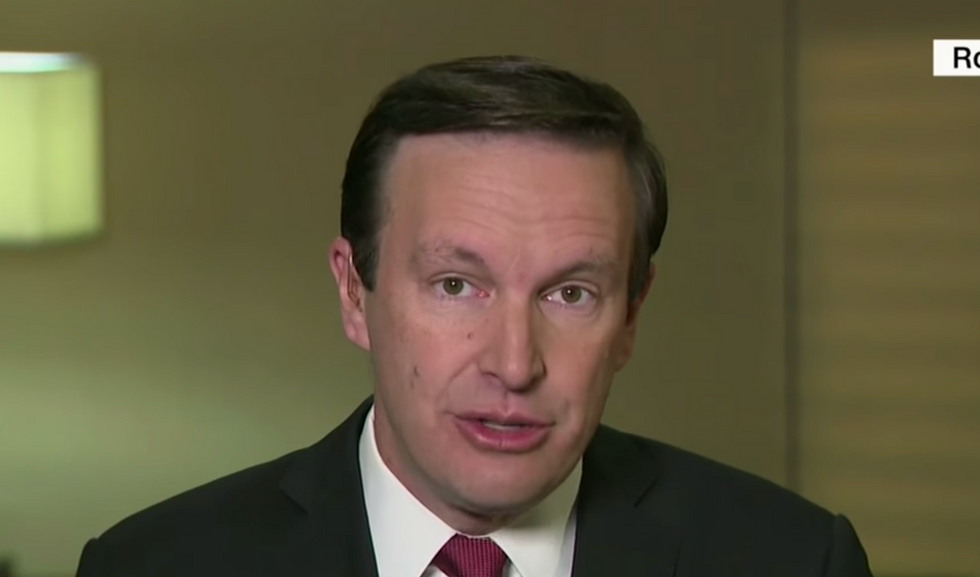 Even as Republicans throw up distractions and smokescreens to deflect from President Donald Trump's impeachable conduct with Ukraine, the known facts about his efforts to pressure the foreign government into investigating Joe Biden remain a damning indictment for all to see.

But it's clear that, despite the aberrant and anti-democratic nature of Trump's conduct, Republicans have yet to be convinced that what has been revealed is damning enough to remove a president. There's no doubt that they would have been wielding pitchforks at the White House gates has a Democratic president carried out such a scheme, but at least in principle, there's nothing wrong with arguing that, while Trump's conduct was bad, it wasn't bad enough to justify impeachment.

There are many arguments one could make against this specific claim, though. Sen. Chris Murphy (D-CT) spelled out one such compelling case on Twitter, arguing that — even though what we definitively know about Trump's actions is already condemnable — there's strong evidence that he was intentionally employing a quid pro quo scheme by using American military funding to pressure Ukraine.

While it's not necessary to demonstrate a quid pro quo was involved for Trump's acts to be an abuse of power, some Republicans have suggested the president's actions would have to reach this level for them to consider turning on him, so it's worth analyzing if such a case can be made. (Whether these Republicans would actually stick to their word if a quid pro quo was established, on the other hand, is another matter.)

Much of the evidence for quid pro quo itself can be found directly in the White House's partial transcript of the July 25 call with Ukrainian President Volodymyr Zelensky, even though conservative defenders of the president have claimed the document was exculpatory. Murphy explained:

"But it gets worse," Murphy continued. "Giuliani tells Ukraine over and over and over that they need to pursue his bogus charges of 'corruption' re Biden. He says he is speaking on Trump’s behalf. Trump reiterates this ask personally."

He continued: "The only 'corruption' that Trump and Giuliani press Ukraine on are apparently related to Clinton and Biden. Then, in early September, Pence meets with Zelensky and tells him the aid will not be released until Zelensky takes on 'corruption' as requested by the Administration."

This is all pretty straightforward — and in fact, there's more evidence that military aid was being used as a quid pro quo than even Murphy acknowledges.

For example, it's been reported that Trump himself personally asked for the congressionally approve Ukraine military aid — nearly $400 million — to be delayed beginning about a week before his July 25 call with Zelensky. It's true, as some conservative defenders of the president have argued, that Trump doesn't explicitly mention the delay in the phone call, and subsequent reporting found that Ukraine didn't know about the delay at the time.

But expecting all the damning facts to be contained in a single phone call is a preposterous standard. As Murphy noted, the Ukrainians were aware of the delay and all the demands by September.

Further, as NPR has revealed, the claim that "corruption" in Ukraine was a legitimate concern is nonsense. Undersecretary of Defense for Policy John Rood told Congress in a letter sent in May that he had "certified that the Government of Ukraine has taken substantial actions to make defense institutional reforms for the purposes of decreasing corruption [and] increasing accountability."

Did Trump actually have more concerns about Ukrainian corruption — an issue he doesn't show any sincere interest in regarding Russia or other states run by his authoritarian friends — than the Defense Department? This strains credulity.

Trump has also cited another excuse for stalling aid to Ukraine. He has said that other European allies should be doing more to help Ukraine rather than letting it depend on the United States. While there might be merit to this argument, stalling aid that Congress has already allocated is hardly a reasonable way to approach such concerns. And further, as NPR's reporting revealed, these arguments seem disingenuous:

Eight European embassies in Washington contacted by NPR on Wednesday reported no attempts by the Trump administration over the summer to increase their contributions to Ukraine. "There was no effort at all," said a senior official at the German Embassy, who requested anonymity to speak freely. "The topic was not brought up at all at recent meetings we've had."

European diplomats hasten to point out that they have been contributing far more to Ukraine than what Trump has claimed. "Our bilateral assistance to Ukraine of $1.4 billion is almost at the U.S. level," said the German Embassy official. The U.S. has disbursed nearly $1.5 billion since 2014 in security assistance to Ukraine, while the European Union has provided about $15 billion, mostly in the form of loans.

It's still conceivable that there's some other, unknown reason for the delay of aid to Ukraine. But the administration hasn't provided such an explanation, even when it has strong incentives to defend the president. The best explanation is that it was a clear quid pro quo. The biggest question left is how long the Republicans will go on denying that.