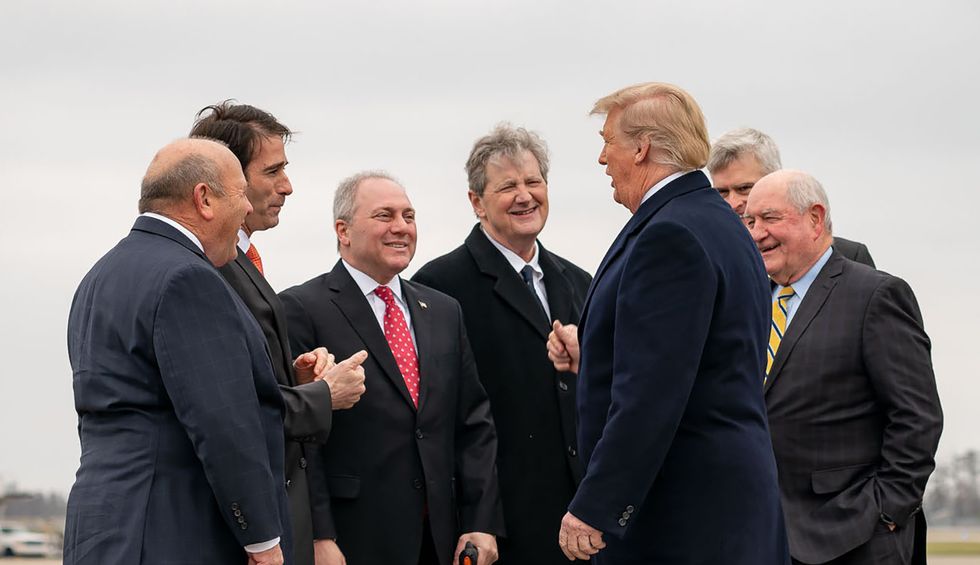 One of the unexpected joys stemming from the Democratic House majority finally finding the courage to start an impeachment inquiry is to see Republican politicians are finally getting a taste of their own medicine. For decades, Republicans have championed an Ayn Rand-esque philosophy that exalts the rich and the powerful and treats working people as a resource to be mined, rather than as people who deserve respect, much less fair compensation for their work. Now, as they grovel before Donald Trump, Republicans are finally getting a glimpse of what it's like to be on the losing end of the Randian social contract.

When it comes to the Ukraine scandal and the impeachment inquiry, the deal between Trump and Republican politicians is straightforward: They are expected to fight for him, even at great cost to themselves, and in return he will give them nothing. The best most Republicans can hope for is that their overlord will decide to let them live in peace, instead of randomly tweeting down havoc upon them.

On Sunday, Robert Costa and Philip Rucker of the Washington Post published an article, largely sourced from anonymous Republican officials, exploring the obvious fact that most Republicans on Capitol Hill feel they must remain loyal to Trump, even at great personal expense. This is not because they think Trump is anything but a comically evil villain. It's because they, like Darth Vader's henchmen, know that any show of defiance means that Trump is likely to choke the life out of them from afar, metaphorically speaking.

"Across the country, most GOP lawmakers have responded to questions about Trump’s conduct with varying degrees of silence, shrugged shoulders or pained defenses," Costa and Rucker write. "For now, their collective strategy is simply to survive and not make any sudden moves."

Republicans know there's no good defense of Trump for trying to strong-arm the Ukrainian government into manufacturing conspiracy theories in order to derail the presidential ambitions of former Vice President Joe Biden. Nor is there a defense for Trump going on national television and inviting other foreign governments, particularly China, to buy his favor by doing the same. But instead of preserving their dignity and standing up to Trump, Republicans are choosing humiliation and subservience instead.

The two methods Republicans are choosing to humiliate themselves for Trump's benefit seem to be: 1) playing dumb and helpless, and 2) making transparently silly excuses.

(In case there's any confusion, the media has no law enforcement power. Senators like Ernst, however, do have the power to convict Trump in an impeachment trial.)

Over the weekend, many Republicans leaned on the classic excuse that bullies — and their minions — love to hide behind, which is that Trump is "just joking" when he makes problematic remarks. Asking China, on camera, to investigate Joe Biden was not a "real" request, but just a delightful prank being played on the press.

"You really think he was serious about thinking that China is going to investigate the Biden family?" Rep. Jim Jordan, R-Ohio, asked Sunday morning on ABC News, adding, "He's getting the press all spun up about this."

The "just joking" claim was also repeated by craven coward Sen. Marco Rubio, R.-Fla., along with Sen. Roy Blunt, R.-Mo. It was a pretty half-hearted excuse in both cases, and neither man even bothered to argue that it was actually funny for Trump to pull this kind of stunt.

Still, it's not surprising that Republicans might think it wise to reframe Trump's desperate efforts to get some foreign country — any foreign country — to emulate Russia's behavior in 2016 as mere trolling. After all, trolling the liberals is the highest possible goal for the modern Republican party, and any kind of corruption or criminal behavior can be excused if it's done for the lulz.

The problem is that even if you're standing on your head after taking a megadose of LSD, it's not possible to hallucinate Trump's comments into nothing more than an impish prank. As Joel Mathis of The Week pointed out, all one needs to do is watch the video of Trump asking for China's help: It's  clear that he was deadly serious, which even conservative publications like National Review have admitted. Anyway, there's no ambiguity about the Ukraine situation — Trump was definitely not joking when he leaned on President Volodymyr Zelensky to open a phony investigation into the Bidens — so why would he bother "joking" about China?

Republicans humiliate themselves every time they utter a word in defense of Trump or, as in Ernst's case, try to pretend this situation has nothing to do with them. (Ernst is one of several GOP senators who face tough re-election battles in swing states, which is no coincidence.) But the reasons they keep doing it aren't exactly mysterious. They're all mortally afraid of Trump, and for good reason. He's made clear that any Republican who dares show an ounce of disloyalty to him in public will get smacked down, hard, in a way that is meant to hurt their reputation in the eyes of the Fox News-addled voters Republicans depend on for their political survival.

After all, Sen. Mitt Romney of Utah offered the mildest possible rebuke of Trump's behavior on Friday, saying it was "wrong and appalling," but declining to say that it was illegal or that impeachment was merited. Of course he still got hammered by Trump in a series of tweets, some literate enough to suggest they were written by staffers and others, later in the day, that were more likely typed out by the president himself. (Trump suggested, for instance, that Romney should be impeached — but there is no such procedure for senators.)

Trump doesn't even need an act of perceived disloyalty in order to offer up a Republican politician as a sacrifice. For reasons that are still unclear and were quite possibly arbitrary, he recently blamed Energy Secretary Rick Perry for his ill-advised phone call with the Ukrainian president. This caused great merriment and mockery on Twitter, but also served as a reminder to Republicans that their leader has no loyalty towards them and won't hesitate to use his power to bring them down, possibly just for the hell of it.

But waste no tears for Republican politicians. These people have spent their careers trying to create a society where the powerful can exploit and abuse everyone else at will. They've worked tirelessly for a society where employers can underpay and overwork their labor, while workers can't organize for better treatment. For a country where people of color live in terror of being randomly harassed or even killed by police with no recompense. Where young women who are raped on campus are stymied in their efforts to get justice — and are denied access to reproductive health care to prevent being forced to bear a rapist's child.

In other words, Republicans have long backed the idea that might makes right. Their boy Donald Trump, who is fond of asserting that being president means he can do whatever he wants, is simply living that creed to its fullest. Now Republicans, at long last, are enjoying a little taste of what it feels like to be on the receiving end of their own philosophy.