Conservative writer: Lindsey Graham is about to find out if swallowing 'every piece of dog crap on the Trump buffet' was worth it 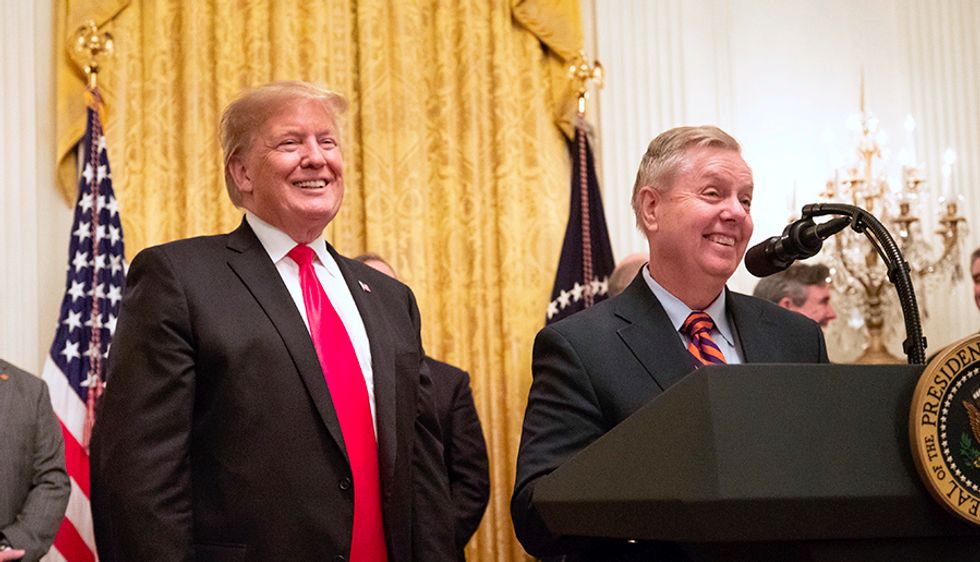 Sen. Lindsey Graham of South Carolina went from being a vehement critic of President Donald Trump to being one of his most embarrassing sycophants. But the South Carolina Republican will part company with Trump on rare occasions: he criticized Trump’s unwavering support for Saudi Crown Prince Mohammed bin Salman after the murder of journalist Jamal Khashoggi in October 2018, and this week, Graham has been highly critical of Trump’s decision to withdraw U.S. troops from northeastern Syria. And according to Jonathan Last, executive editor of the conservative website The Bulwark, Graham might find out whether or not being so obsequious to Trump all these months was worth it.

MSNBC’s Joe Scarborough spoke for many other Never Trump conservatives when, in 2018, he asserted that Graham had gone from being “John McCain’s wing man in the Senate to being Donald Trump’s carnival barker.” But Last, in his October 7 column, floats the idea  that Graham might have had what he considered a perfectly logical reason for sucking up to Trump: he wanted to be in the president’s good graces in case a major crisis came about.

“Lindsey Graham has spent three years abasing himself in front of Donald J. Trump —three years in which he has had to publicly repudiate just about everything he’s ever said,” Last writes. “And he did it all with an eye toward a moment like this: when Trump might do something impulsive and dangerous to American foreign policy.”

Last continues, “And Graham’s theory was: when the moment of peril comes, I can do more good for American interests by being on the inside — that way, I’ll be able to influence Trump’s decision-making. This is not a crazy theory. It’s totally understandable.”

I don’t know all the details regarding President Trump’s decision in northern Syria. In process of setting up phon… https://t.co/YGuzpiI9Wj
— Lindsey Graham (@Lindsey Graham) 1570450604.0

Trump’s decision to withdraw U.S. troops from Syria, Last writes, is such a “moment of peril.” And this is one time when Graham isn’t robotically reciting pro-Trump talking points, unlike some of his supporters.

“Say this for Graham: the Trump true believers are going to bend over backwards to explain how actually, Trump is totally right to pull out of Syria,” Last writes. “Actually, America has no vital interest there. Actually, we can’t be the world’s policeman. Actually, the true conservative position is that Turkey is part of NATO, so they’re our real ally.”But Graham, Last stresses, “didn’t do any of that. He went at Trump as hard as you can go without giving up your chair at the party. The question now is: will it matter?”

The Bulwark was founded in December 2018 by two right-wing journalists and Trump critics: Charlie Sykes and neocon Bill Kristol (formerly of the Weekly Standard). And in contrast to overtly pro-Trump sites like Breitbart News, The Bulwark has often attacked Trump from the right.

Last concludes his October 7 column by stressing that what Trump decides to do next regarding Syria could determine whether or not, from Graham’s standpoint, all that sucking up made sense.

“If Trump changes his mind and protects our Kurdish allies,” Last writes, “then maybe it was a good idea that Graham swallowed every piece of dog crap on the Trump buffet. But if he doesn’t? What then?”