Conservative columnist lays out why impeachment will decimate the GOP: 'The party’s outlook for 2020 is materially worse with Trump than without him' 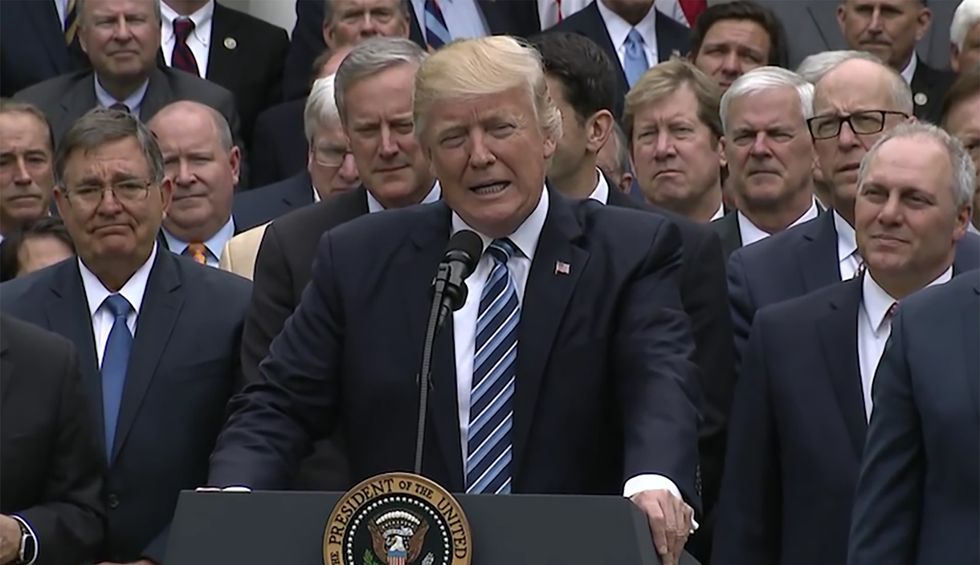 Despite scandal after scandal — from close associates going to federal prison to a Supreme Court nominee accused of sexual abuse — President Donald Trump still has an enthusiastic base of hardcore supporters who cheer for him at MAGA rallies. And to them, the Ukraine scandal is nothing more than “fake news.” But there are also millions of Americans who are rejecting Trumpism, and conservative Washington Post columnist Jennifer Rubin emphasizes in her October 8 column that their numbers are growing.

“Three new developments suggest that President Trump’s political future is much worse than Republicans imagine, and that the party’s outlook for 2020 is materially worse with Trump than without him,” Rubin explains. “Given Trump’s predilection for self-destruction, the chances that he will come through this unscathed are remote.”

The first development, according to Rubin, is a growing appetite for impeachment in recent polls. Rubin points to a Washington Post/Schar School poll that was released this week and shows that 58% of Americans are now in favor of the U.S. House of Representatives pursuing an impeachment inquiry, while 49% want to see Trump removed from office. Those figures are for Americans in general regardless of party affiliation; among Republicans, Rubin observes, the poll shows 30% approval for an impeachment inquiry.

“Given these numbers,” Rubin writes, “House Minority Leader Kevin McCarthy’s effort to concoct a reassuring poll from the National Republican Congressional Committee for his members looks amateurish and blatantly dishonest, if not ridiculous…. Polling numbers this bad and this early in the process begin to shift the calculations of members of Congress and 2020 candidates.”

The second development, according to Rubin, is “Trump’s belated decision to prevent Gordon Sondland, U.S. ambassador to the European Union, from giving a deposition Tuesday” — a decision that, Rubin says, “suggests abject panic on the White House’s part.”

The third development, Rubin writes, is Trump’s decision to withdraw U.S. troops from northeastern Syria — a decision she considers a slap in the face to the Kurdish-led forces that have been working with U.S. troops.

“Trump’s broadly condemned decision to abandon the Kurds — to the delight of Turkish strongman President Recep Tayyip Erdogan and Russian President Vladimir Putin — reminds Republicans that Trump is a threat to U.S. interests and their own political ‘principles,’” Rubin stresses. “It is also a reminder that leaving Trump in office a day longer than absolutely necessary is reckless.”

Rubin concludes her column by stressing that Trump’s sycophants are “in denial” if they don’t realize how problematic these developments are.

“In sum, with each new development, Trump’s situation gets worse,” Rubin asserts. “There is no good news in any of this, nor any prospect that Trump can reverse the momentum in favor of impeachment. Even if he is still in denial, those around him might want to rush on to the ‘bargaining’ stage of grief and figure out how to get him out of office with the least amount of humiliation and legal exposure.”