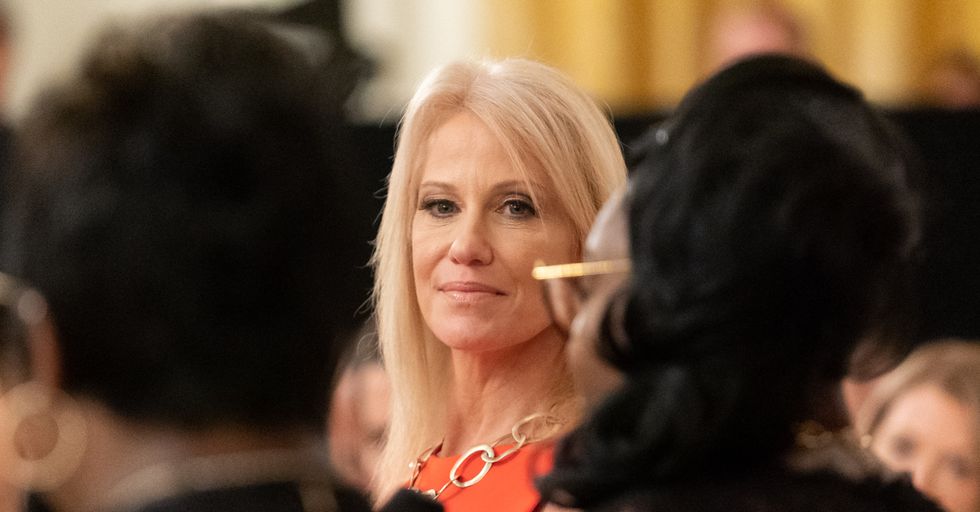 Kellyanne and George Conway aren’t the first political couple known for having different views: Democratic strategist James Carville is married to Mary Matalin, an outspoken conservative. Liberal Mika Brzezinski is married to Never Trump conservative Joe Scarborough, and they co-host MSNBC’s “Morning Joe” together. But the Conways’ marriage is especially intriguing: one of President Donald Trump’s most ardent defenders is married to a Never Trumper who absolutely detests him. And Washington Post columnist Monica Hesse has fun analyzing the Conways’ marriage in her most recent column, "Kellyanne and George Conway’s tawdry love triangle with all of us."

Trump senior adviser Kellyanne Conway and attorney George Conway are both right-wing Republicans. But while Kellyanne works closely with Trump in the White House, George often lambasts him on Twitter and has repeatedly stressed that he believes Trump is terrible for the Republican Party and terrible for the conservative movement.

“On a sweeping historical level,” Hesse writes, “these are shocking things for a conservative to publicly say about a sitting GOP president. On a personal level, they’re shocking things for someone to publicly say about his wife’s boss. The behaviors and world views (George) Conway denounces are the very behaviors and world views that his wife spends her waking hours shaping and enabling. The regime he finds abhorrent is the regime his wife, Trump’s former campaign manager, worked to build.

The fact that the Conways have such diametrically opposed views on Trump, Hesse contends, is what makes their marriage so fascinating to Americans.

“The tawdriness of watching George Conway drag Trump through the mud gets at so much of our psychology these days,” Hesse explains. “It’s the proof that, yes, politics really are ripping families apart. It’s the validation, for liberals, that someone within Trump’s tribe is willing to call him a fraud. It’s the sense, for conservatives, that some people really do care more about stopping Trump than they care about anything else.”

Some pundits have wondered if perhaps the Conways are orchestrating an elaborate publicity stunt by expressing such radically different views on Trump. And Hesse toys with that idea in her column.

Hesse notes, “These are the Conways-at-home scenarios I find myself actively imagining. What are their specific pathologies? How can either of them stay married to the other? This isn’t James Carville and Mary Matalin — this is ‘Who’s Afraid of Virginia Woolf?’ Is this all part of an act — a long con for a co-authored book deal? Why can’t we look away?”

As Trump’s rollercoaster presidency moves along, Hesse predicts, political junkies will continue to be anxious to hear what the Conways have to say and how vehemently they disagree with one another.

“I think, for the people who have ‘George Conway’ on a Google news alert — who eagerly wait to see what he’s going to say next — what they’re really savoring is the imagined shame of it all, traveling from George through Kellyanne to Donald Trump,” Hesse asserts. “Here is a president who seems not to feel shame but who does seem to fear, more than anything else, appearing weak or emasculated. We’re watching not a love triangle, but six or seven of them.”