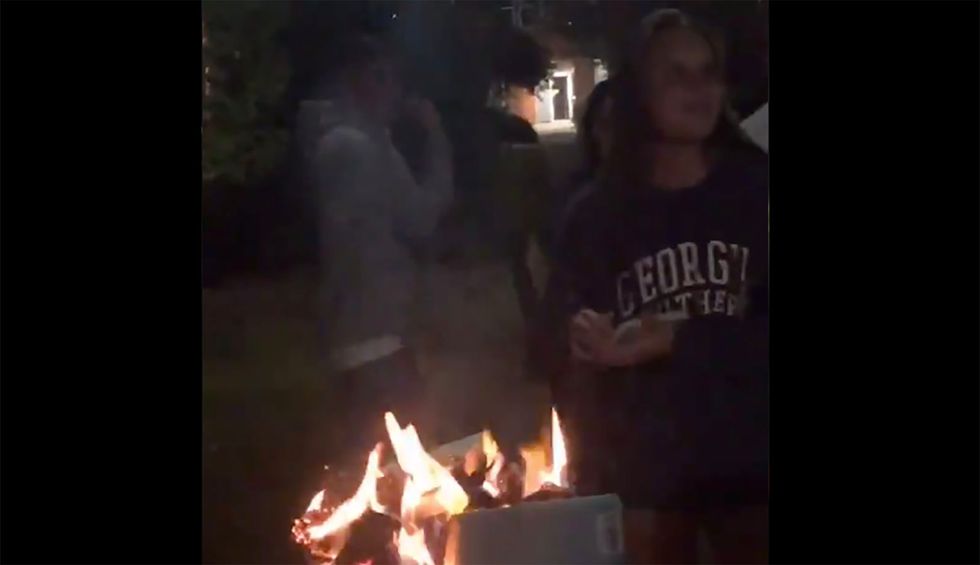 On Wednesday, Latinx author, professor, and New York Times contributor Jennine Capó Crucet spoke to a large group of first-year students at Georgia Southern University. Lest you think all of the students found this experiencing enriching, we have some bad news. How poorly did it go? Some students (all of whom appear to be white) took what should have been an opportunity to talk about white privilege and turned it into an opportunity to burn books outside of their on-campus apartment.

Crucet’s novel, Make Your Home Among Strangers, is an acclaimed work of fiction that details the experience of a Cuban American girl who grew up in Miami. The fictional character attends a prestigious university in New York, where she battles to fit into this new wealthy, white world. Understandably, a great text for undergraduates; a rite of passage, diversity, and a literal college setting. According to the university, the book was required reading for some “first-year experience” classes.

When Crucet spoke at the school on Wednesday evening, the entire first-year class was able to attend. So, students who had to read the book as well as those who were not assigned it. What should have been a great learning opportunity and discussion, though, quickly turned ugly.

As first reported by the university’s newspaper, the George-Anne, an unnamed student asked the age-old question: How can white privilege be real when not all white people are “privileged”?

“I noticed that you made a lot of generalizations about the majority of white people being privileged,” the student asked during the Q&A, as reported by the school paper. “What makes you believe that it’s okay to come to a college campus, like this, when we are supposed to be promoting diversity on this campus, which is what we’re taught. I don’t understand what the purpose of this was.”

To which the author smoothly retorted: “[White privilege] is a real thing that you are actually benefiting from right now in even asking this question.” Zing! As in her statement below, the author later noted that while some students in the audience argued about privilege, others apologized on their behalf.

In a statement she released on Friday, the author confirmed that the university knew what she was coming to talk about ahead of time. This shouldn't surprise anyone, given the content of the book, but is important to point out that she didn’t go “off script” or do anything “wrong” by talking about privilege.

Students even gathered outside of her hotel after the event. Between that and the book burning, that’s a downright terrifying situation. She had to change hotels out of fear for her safety.

In a statement, university spokesperson Jennifer Wise said that GSU does not plan on taking any actions against the students. Why? Book burning is within their First Amendment rights.

As reported by BuzzFeed News, more than 60% of students who attend the school are white. Nearly a quarter are black, and about 6% are Latinx. The counseling center issued a statement stressing that it’s prepared to support students who are, understandably, traumatized by what their peers have done.

There’s a lot that’s disturbing about this situation. That a woman of color is harassed and targeted for simply participating in an event as she was asked to. That young people want to literally destroy and erase content in books they don’t agree with. That the content they don’t agree with prompts them to question their own privilege. That, as reported by the school paper, some students chanted “Trump 2020” during a woman of color’s event.

Many of the book burning videos, originally posted to Twitter, have already been deleted, but here’s one which is still viral:

And here are some clips preserved in news coverage:﻿

Crucet’s latest book, an essay collection called My Time Among the Whites, was released in September.