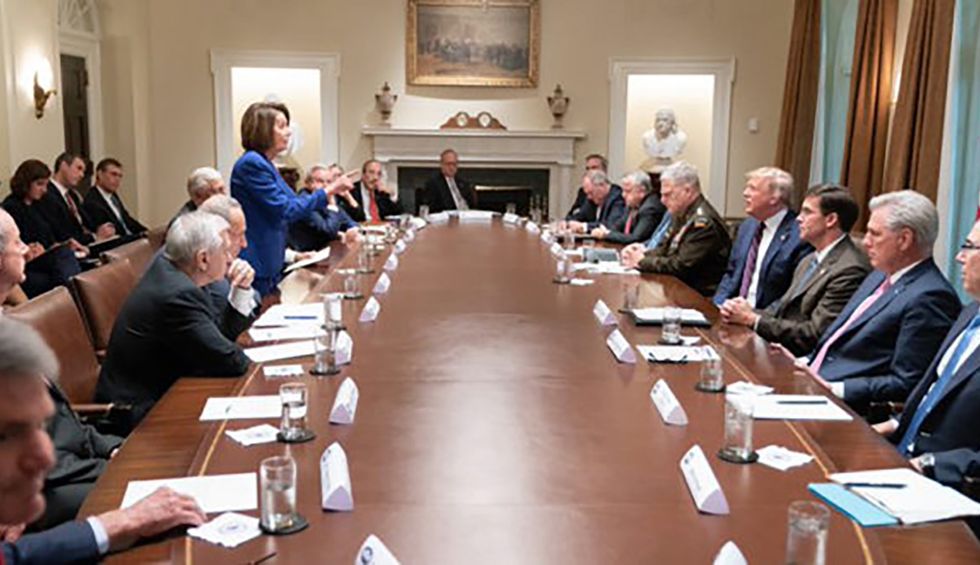 Last week, President Donald Trump met with Democrats at the White House to discuss the way both sides could work to fix the President's mistakes in Syria. Democrats left the White House saying that the President had another meltdown during the meeting, which prompted Trump to claim Speaker Nancy Pelosi (D-CA) was the one who had a meltdown. He then posted photos of Pelosi sitting quietly and another photo of Pelosi standing and pointing at him.

Body language expert Dr. Jack Brown posted the photo and gave his own analysis of what he believed was happening in the photo.

"When a person has little or no empathy — and/or when they're far from their emotional baseline, their ability to interpret how others will view an event becomes dramatically distorted," Brown explained Sunday. "Rarely has this behavioral axiom been better exemplified than last Wednesday at the White House."

He went on to explain that the "collective body language was profoundly telling" in the photo that has since gone viral, though not in the way Trump wants it to.

It wasn't just Pelosi who stood from the chair and talked down to Trump and the line of men sitting next to him.

"Notice President Trump's orientation to both Speaker Pelosi and the table. Both his chair and Trump's torso are leaning away from Pelosi. For him, this configuration is highly unusual," he wrote with a zoomed-in photo of the President. "Trump's almost always leaning forward — whether he's seated or standing. Moreover, the President's hands are hidden beneath the table. This, too is not at all Trump's normal behavior. When he's seated at table or a desk, his hands are most often on its surface — otherwise, they're folded across his chest. What we see here is rare for Trump."

He explained that hiding one's hands is a "red flag for withdrawal," as well as dishonesty and a need for protection.

"Donald Trump's medial (inner) eyebrows are vectored downward. The expression on his face is an amalgam of both anger and fear," Dr. Brown wrote, noting that he's clearly projecting a "beta and protective emotional tone."

While some things about Trump are evergreen, Dr. Brown said that it's clear from the photo that Trump is "fearful and withdrawing while telegraphing significant dishonesty."

He suggested looking back at the full photo:

"Notice how Trump repositioned his glass forward on the table? He frequently does this with any objects placed in front of him," he explained. "This is a manifestation of narcissistic personality disorder. Narcissists routinely force themselves into others' personal spaces and take up more room in common spaces."

Meanwhile, Pelosi is in a power-pose, what he calls "hyper alpha," where she's clearly standing up, but also leaning forward with her legs against the table.

"Nancy Pelosi is pointing with her most powerful finger (the index finger aka forefinger) on her dominant hand. Her arm is moderately extended — again, over the table," he wrote. "The remainder of her fingers and her thumb are retracted (amplifying the finger's power). Pelosi is pointing just over the head of President Trump, seated directly across the table from her. Pelosi's eyebrows and her forehead are elevated."

He explained that Pelosi is expressing emphasis, but her face isn't angry, nor does she seem to be yelling. Pelosi said that during this photo, she was saying, "With you, all roads lead to Putin."

By contrast, on Trump's side of the table, the men are all looking down, with their hands folded in their laps.

"Immediately to Trump's right is General Mark Milley — the chairman of the Joint Chiefs of Staff," Dr. Brown explained. "Along with his head, neck, and torso leaning forward — his jaw is clenched, which is signaling an adrenaline surge. He's not only looking down, but his eyebrows are also dramatically lowered. His lips are thinned (anger). The corner of his mouth is angled downward (indicating regret and/or sadness). His fingers are tightly intertwined (frustration).

Senate Leader Mitch McConnell (R-KY) is seen leaning backward and away from the table with his hands on the table.

You can read the rest of the thread on Twitter where Dr. Brown talks about Steve Mnuchin and House Minority Leader Kevin McCarthy.